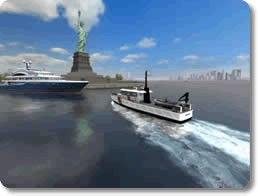 Ship Simulator 2006 Delivers an Extremely Realistic Experience of Commanding Ships From Tugboats on up to the Titanic!

Put Your Captain's Skills to the Test!

Get behind the helm of eight different vessels, from speedboats and water taxis to enormous container ships and cruise liners. Ship Simulator 2006 delivers an extremely realistic experience of what it's really like to command 40,000 tons of steel, wood, glass, and almost everything else.

Rewrite history by successfully piloting the mighty RMS Titanic, victim of the most famous shipwreck of all time!

Each of the eight vessels has its own distinctive feel and response to the controls which reflect its real-life handling characteristics. Cause damage to your ship or other objects, and you could lose money or fail the mission. It takes careful navigation and maneuvering to get the job done!

Ship Simulator 2006 includes 40 unique scenarios. To ease you into the game, your tasks are fairly easy at first and grow more difficult as you go.

You'll begin with simple objectives like mooring your vessel and moving cargo and passengers, and progress to motorboat races, maneuvering huge ships in tight spaces, even search and rescue missions!

The game takes you from the tropical paradise of Thailand's Phi Phi Islands to some of the world's busiest harbors: Rotterdam, Hamburg, and New York. It also includes a level editor with a sleek, user-friendly interface so you can create your own personalized missions!

The wide world of Ship Simulator 2006 comes alive! Whether calm aquamarine inlets or deep saltwater harbors, the game's water graphics are stunningly realistic. Watch the ripples as your ship slices through the water, the wake it leaves behind, and its shimmering reflection on a sunny day.

Your vessels are highly detailed 3D creations which seamlessly interact with the world around them. For a seafaring experience unlike any other, learn the ropes with Ship Simulator 2006!

A Safe Way to Sail

Boating can be an interesting hobby and occupation, but it’s also ludicrously expensive and difficult. Owning both a boat and property by the waterside, paying the insurance and licensing fees, and keeping everything properly maintained can eat a hole in anyone’s wallet, and that’s all before you even get a chance to go to sea. Then there are all of the dangers involved, like storms, water spouts and idiot on jet skis. There’s no question on why so few people get to experience the pleasure of maritime life.

The not-so-creatively named Ship Simulator 2006 aims to allow you to do the next best thing. Here, you’ll commandeer a number of ships through a variety of inlets and bodies of water, and get a feel for what controlling them is really like. Does it live up to its name, or does its hull have a few leaks in it? Read on.

So Many Ships, So Little Time

The first thing that can be said about Ship Simulator is that it does not stint on the variety of ships. Tugboats, yachts, powerboats, tankers and even the Titanic itself are all yours to pilot! Each individual vessel feels fairly unique; smaller ones are obviously faster and more maneuverable, while the bigger ships will feel appropriately cumbersome and slow to pick up speed. There are even some subtle control differences for each the boat. Some have two engines, others only have one. Some boats have bow thrusters, others do not. Some have steering wheels that stay where you leave them, others will reset, and so on. No two boat types feel alike, and learning how to properly steer and operate a new one always feels like an adventure.

Unfortunately, despite the different methods of control between each ship, they still can’t help but feel pretty generic on the whole. The basic idea behind every vessel is simply just to set the engines to the correct direction, gauge the right, and then steer it around as normal, slowing down when necessary. This makes sense for smaller vessels that would normally be piloted by one man, but for larger ones that require an entire crew to operate, like a tanker or the aforementioned Titanic, it’s very silly and not even remotely realistic. Once could perhaps justify those instances as being more representative of a captain issuing order to his crew to get the ship moving, but that’s just too abstract and not really in the spirit of an appropriate vehicle simulator. Truth be told, as cool as operating the Titanic sounds on paper, it really doesn’t have any place in this kind of game.

Gameplay in Ship Simulator is largely mission-based. There are 40 missions included, each one taking place in a specific locale, during specific weather, and using a specific boat. Most are initially locked, only becoming available after the available missions have been successfully completed in a satisfactory manner. Open missions can be done in any order and replayed as often as desired.

On the surface, missions look like they offer a decent amount of variety. One mission may call for you to investigate some possible smugglers stationed off the coast, another may involve delivering cargo from one harbor to the next, and another can involve rescuing some stranded islanders. Deep down, however, these missions are all more or less the same thing; you just go from one waypoint marked on your map to the next in the correct numbered order. Get to them all, and you’re done. Missions really aren’t the most exciting things out there, and a lot of them feel awfully boring. Oftentimes, you’ll end up just watching your ship drift through the water in a straight line for minutes at a time. There isn’t much in the way of hazards or obstacles either, so the whole thing feels terribly monotonous. Worse, due to the need to unlock later missions, you may very well find yourself stuck playing and replaying the dull ones just to be able to reach the more interesting ones.

On the plus side, it’s possible to ignore the built-in missions entirely. The game includes some modding tools that allow you to create your own missions, as well as share them with the world. If you’re persistent, you might be able find some fan-made levels online that hopefully trump what comes packaged with the game, though that may be a lot of work for a product that’s not quite living up to its potential. Alternatively, you could just play around with the tools, which might end up being more fun than the actual game. It’s really up to you because on the whole, Ship Simulator isn’t a whole lot of fun to play.

What’s worse than the gameplay is the lack of effort to really bring the world of Ship Simulator to life. This does not just cover the graphics, though those are pretty lacking. Every area on land, including the shoreline, buildings and trees use some embarrassingly low-resolution textures and models. The water isn’t any better either, and what glimpses of people we do see, like those that can be found sitting in your ship, look poor and statuesque. If there is one good thing to find in the visuals, however, it would be that the ship models look pretty good. Their textures are of slightly higher quality than the backgrounds, but perhaps the coolest effect is that their bridges are fully modeled to the point that they can be thoroughly explored if you zoom in to a first-person view.

The most serious issue, however, is the lack of believable physics and weather. There are no apparent currents or tides to be seen in the water and if there are, they don’t have any visible effect on the ships. Winds and waves are present, but their purpose is simply cosmetic. This is unacceptable for a vehicle simulator; anyone with even an ounce of maritime experience would know how a boat’s mobility can and will be affected by the weather and tides. In Ship Simulator, the ship’s size and engine are the only things that matter.

Ultimately, Ship Simulator leaves itself severely wanting. Gamers won’t be impressed by the mundane and slow-paced gameplay, and the lack of accurate physics on the water and ships will not impress maritime enthusiasts. The variety of boats is admittedly nice, and the modding tools are certainly not a bad addition. However, at the end of the day, Ship Simulator 2006 is, ironically enough, not a very good ship simulator.

Player created video showing one of the missions in Ship Simulator 2006. 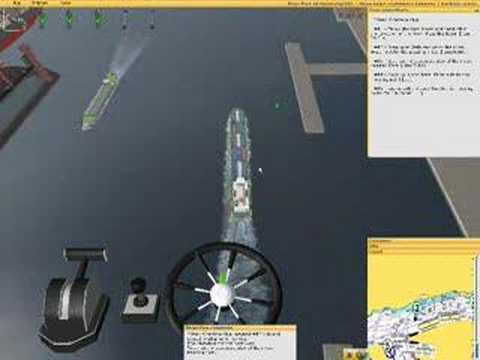 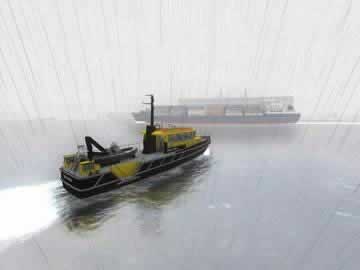 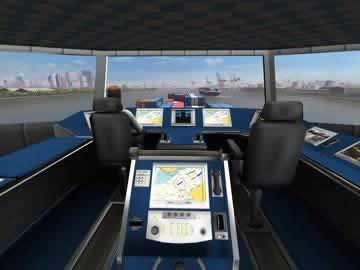