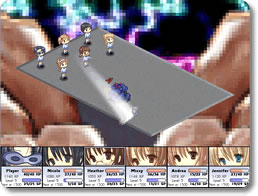 These Girls are Tough and Ready to do Battle!

School is done for the day, but the science girls can't go home and relax yet because a host of alien plants is attacking the school! Help the six science-loving girls battle the plants using science, save everyone and still make it home in time for dinner!

This endearing role-playing game will draw you in from the very beginning. Once you find all six science girls, you can control them all in battle, though only the three in front can attack. Level up their hit points, ability to dodge, punch attack and more, plus each girl's unique special move, such as Lightning and Hypnotize, by gaining experience from winning battles.

Explore the school and alien worlds and battle tons of enemies like vines, pods and more. A unique feature of this game is that once one of the girls runs out of hit points, she can no longer fight in the battle but she can be healed using a girl's power instead of having to find a resurrection point or special item like in many RPGs.

The characters, animations and story are charming and will make you want to keep coming back to help the science girls. Learn interesting science facts about plants, rockets and more as the girls try to figure out what the aliens are and why they're here.

Hardcore RPG fans and casual gamers alike can experience the thrill of RPG-style battles and the fun of using science to destroy aliens because there are three difficulty levels.

Destroy aliens in the name of science now with Science Girls!

Science Girls is a role-playing-game that provides a slightly different experience than other titles within this genre. The somewhat zany story of alien plants attacking and a group of science club girls stepping up to fight them is presented through rather well drawn sequences of anime-style scenes that are similar to a visual novel.

Each girl specializes in one realm of the scientific field, such as physics, biology, and chemistry, and their dialogue lets you learn a few things as you make your way through the game, which is rather interesting at times. It is quite nice that the interface is easy to use and the option of picking between three difficulty levels makes it possible for gamers of pretty much any level to get into this game.

The turn-based battle system is a bit different with only three of your girls being able to act while the other three stand in the back, but you can switch them around at any time. Your actions are defined by a set amount of SP, even a basic attack costs 1 SP, and so there is an added tactical element to battles in choosing when to use the girls special abilities and when to swap them around which is rather intriguing. Also if your girls fall in battle there is no need to find a resurrection point or require any special item to revive them, all you need to do is use one of your healing items or one of your girl's special abilities.

Yet the battles themselves feel a tad dull and there isn't a lot of depth to them since the girls only learn a handful of special abilities. Additionally the battlefield pad doesn't change all that much between areas and the attack animations are rather mediocre which all tends to make fights a bit bland. There are also some balancing issues with enemies having a lot of hit points and evasion points which can make battles feel long and even tedious.

Overall Science Girls provides a rather interesting story and a streamlined RPG experience with some flaws in the gameplay that hold it back from being a true classic. Its unique features provide something new for RPG fans and you can learn a bit about science in general through the quirky dialogue. The variable difficulty makes this a good game for new gamers or experienced RPG players as well. Its low price makes up a bit for the shorter game length, but you should definitely try out the demo first to see if the gameplay seems right for you. 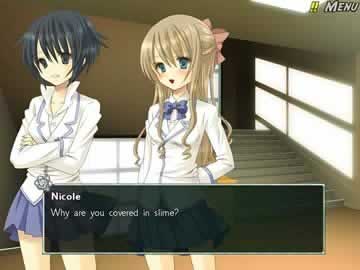 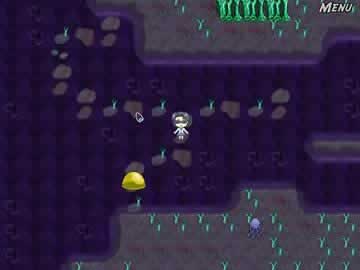