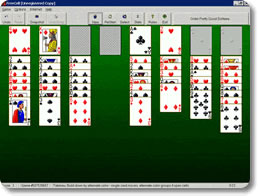 Over 700 solitaire games with all the rules to keep you playing...well, pretty much forever!

Many Unique Solitaire Games to Choose From!

Solitaire can become your endless source of fun with Pretty Good Solitaire! Choose from 725 different solitaire games, from classics like FreeCell and Klondike to original adaptations like Demons and Thieves and Double FreeCell.

Choose your game from an easy-to-use menu of games. Play an old favorite or learn a new version by reading straightforward rules. Make each game a unique experience by customizing card backs and the background with beautiful pictures. You can even create your own solitaire games with an easy-to-use wizard!

View your game statistics easily at any time. You can save any game whenever you want, undo all moves and even choose whether you want to drag and drop cards to move them or just right click. Play Quest mode for an added challenge by earning the most points to advance to higher levels.

Games for Every Day and Every Mood

Pretty Good Solitaire will keep you busy and keep your mind sharp by learning new games. Learn a new game every day or enjoy old favorites; there's a solitaire game for every mood here! You can even submit your scores online and see how you compare to the best players!

You Won't Run Out of Solitaire Options

The gameplay is fairly simple in most games, and usually pretty easy to pick up if you have played some kind of Solitaire before. Each game has different rules, although due to the enormity of games in the collection, many end up being very similar with minor changes in rules. There is everything from Klondike to Baker's Dozen to Whitehorse, and quite literally everything in between.

The instructions are generally fairly intuitive, but have some jargon that may be a bit off-putting at first. Luckily, all of the possibly confusing words are set up as links to their own help page and are defined if you click on them. Words like this include tableau (which basically refers to the piles of cards you are trying to clear), foundation and free cells. Each game utilizes these three elements in its gameplay, and the main goal of the vast majority of the games is to clear the cards in the tableau by some method of stacking.

In traditional Solitaire, you stack cards in order down from King to Ace, alternating between red and black colored cards regardless of suit. Some games in Pretty Good Solitaire use these rules, some require you to stack both up and down in order regardless of suit, and others still have you stack the cards in a completely different manner.

Pretty Good Solitaire offers three different modes of play for even more variety than it already provides in 700+ Solitaire games. You can play a single game either by choosing it yourself or by selecting “random game” from the menu. The random game feature is helpful because most people will not know where to start among so many games to choose from. There is also Quest Mode and Tour Mode.

In Tour, you are able to create a list of different games to play in a row. You get one round of each game you choose and your total score is tabulated at the end.

Quest Mode is like a combination of Tour and Random game. You choose your difficulty level (Apprentice, Journeyman or Master) and the game presents you with a 3x3 grid of choices. You may choose the row you would like to play, then the computer chooses a column. The intersecting box is the game you play. You get one round of each game before the process repeats, for 10 rounds. At the end your score is added up and posted.

Create Your Own Solitaire Game

There is also Wizard, which is an option that allow you to create your own unique game of Solitaire. There are 12 different categories you must select a rule from in order to create your game ranging from how many decks there are to whether or not a grouping of cards can be moved as a unit. It is rather complicated and will be difficult to use well if you don't know a lot about the mechanics of a Solitaire game. However, it can be a lot of fun to learn about the mechanics and make your own game.

Too Many Games Can Be a Drawback

There are also several drawbacks to Pretty Good Solitaire. There are entirely too many games all in one spot. There are different ways of grouping them that make it slightly more manageable, but there are still way too many games for a non-professional Solitaire player to sift through. Reading and learning the rules for every game you play is time consuming and boring.

Graphics and Sound are a Detraction

There is no story or fun animations or anything to tie all the games together or make it feel as though there is a cohesive element to the collection. The graphics are dated and flat, bringing back memories of old computer operating systems' help sections. There are no animations and the only sounds are the cards flipping into place. This makes an already unwieldy game boring and annoying to listen to.

Conclusion - Good if You Want Volume, Not Great If You Want Ease of Use

Overall, Pretty Good Solitaire is only pretty good if you are an extreme Solitaire enthusiast or someone wanting to get into professional Solitaire playing. The graphics and sound are very poor and lacking in every category, and the large amount of games is overwhelming and difficult to sift through. The ability to create your own game is a great feature, but there are so many intricate options that only someone well-versed in the workings of a Solitaire game would be able to create something playable.

If you love Solitaire, give this game a try, but if you are just a casual player, there are much better games to be played. 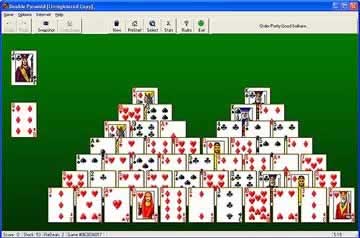 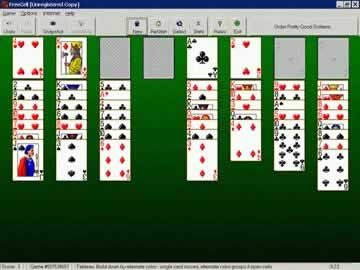