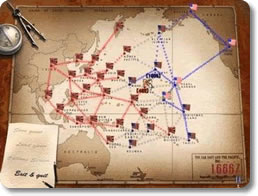 Pacific Gunner has you controlling up to 10 different gun stations, on the shore and on battleships and cruisers, to repel attacking fighter craft, enemy ships, and landing craft.

You will be able to lead assaults at historical sites, such as Pearl Harbor and Okinawa as you sink incoming aircraft with high-powered howitzers. Switch quickly between strategically placed gun turrets to blow away Japanese aircraft including Kates, Vals, and Bettys. Pave the way for allied beach landings with huge destroyer deck guns. Take on aerial and naval onslaughts with pick-up-and-play controls and easy-to-grasp tactical displays. Defend the fleet from island to island and lead America to victory!

Enjoy the thrill of Pacific Gunner!

Pacific Gunner is an arcade-style shooter where you'll find yourself facing off against Japanese forces in the Pacific theater of World War II. Participate in historic battles such as leading the defense of Pearl Harbor to Okinawa as you man a variety of fixed gun emplacements across the battlefields.

Authentic Guns to Defend Your Fleet

This is where Pacific Gunner really stands out in how you move between different gun emplacements, ranging from 50-caliber machine guns, howitzers, destroyer guns, and land based artillery to name a few, which are all scattered across the battle areas. This adds a definite strategic element to your defense as you use your powerful howitzers to sink incoming landing craft while switching over to your 50-cal guns to defend those howitzers positions from enemy aircraft. The use of blind spots for certain guns and the limited amount of ammo for each gun during a wave makes it essential to figure out how to effectively switch around the battlefield and keeps the action interesting and fresh.

Also, each gun emplacement has a certain amount of armor and if one of them gets destroyed during a wave it is gone for the rest of that mission, so you'll have to keep an eye on each gun's status at the bottom of the screen if you want to keep every weapon on hand. These aspects all add to create a depth and intriguing game experience that other arcade shooters just can't provide that is both realistic and addictive.

Fight for Control on a Battle Map

Additionally, how the main campaign plays out on the Battle Map is also fascinating especially considering how it effects your strategy. You have to keep your supply lines open in order to keep your forces strong enough to launch further offenses or defend against enemy aggression. Also, the fact that certain battles are final in terms of who will control that area for the rest of the game really puts on the pressure to defend key locations and adds some strategy to your attack plan.

Tracking Enemey Aircraft Can Be Difficult

There were a few slight issues while playing through Pacific Gunner which might cause a few people some headaches. It can be difficult to determine how many more enemies are in a wave, unless there are only three left, and those last few planes tend to keep their distance from your remaining guns. Add into this that the graphics don't make it incredibly easy to see enemy aircraft at greater distances and this can make things a bit frustrating at the end of missions, especially if you have lost some gun emplacements and are low on ammo.

Overall Pacific Gunner provides a fun and intense arcade shooting experience that has a depth of strategy and game mechanics that other shooters can't provide. The use of multiple gun emplacements and varied mission objectives helps keep things fresh and interesting. While there are a few slight issues that could frustrate some players, the gameplay is more than enough to overshadow them.

Pacific Gunner might not be a game for everyone, but it is sure to be a great addition to any arcade-style shooting fan's collection. 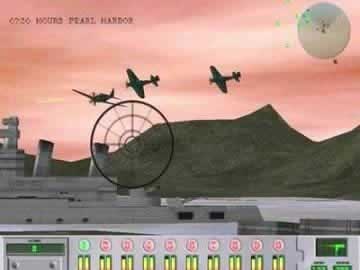 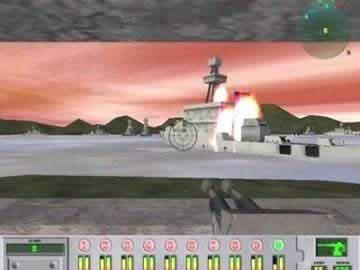