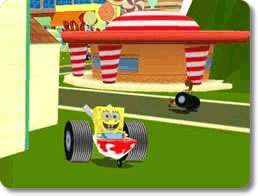 Wild and Wacky Racing Fun with Spongebob Squarepants and the Gang!

IT'S A SUPERCHARGED SPRINT TO THE FINISH!

Play as one of eight readily recognizable characters from Nickelodeon's Nicktoons, including Jimmy Neutron, Danny Phantom, and of course Spongebob Squarepants himself!

Blast off from the starting line and be the first to reach all the checkpoints. Choose the best routes, show off those driving skills, and you'll find yourself within sight of the grand prize: the winner's circle in the Winner's Cup!

Great for all ages - from children to adults!

They can play as their favorite character on large environments like Bikini Bottom and Dimmsdale, which are perfectly captured and recreated straight out of Nicktoons television shows in all their delightful cartoon splendor. Three difficulty levels make the game a real challenge not only for children but for teens and adults as well!

Dodge ghosts, jellyfish, stars and UFOs on your merry way to the finish line, but don't forget about the other drivers!

Each character comes with their own spiffy hot rod, and your opponents have been known to use their special attack abilities to foil your bid for victory. As Spongebob, counter with your own special bubble trap attack, or grab a nitro boost to get right back into the thick of things!

Beyond the main Winner's Cup mode, put the pedal to the metal in Quick Race, and Free Driving. As they advance, players unlock cool mini-games like Treasure Hunt, Tag, and Safety Zone on each map.

The wide variety of modes will keep everyone playing for hours, and in Quick Race mode each checkpoint is randomly placed, so it's a completely new race every time!

Nicktoons Winner's Cup Racing is a roaring good time for everyone in the family, so download it today for a unique gaming experience you won't soon forget!

While racing around Bikini Bottom can be fun, Nicktoons Winners Cup Racing is most definitely geared towards the younger audience. You can explore and race around four different maps all tied to the main characters that are available to race. While the winners cup is limited to four races, three other modes of play are available to extend this game's playability.

Nicktoons Winners Cup Racing will have you driving around places such as Bikini Bottom or Retroville, racing to get treasure or just the next checkpoint. At first there are four characters that you can play such as Sponge Bob and Jimmy Neutron, but four others can be unlocked by getting first place in the winners cup with each initial character.

There are four modes of play available, winners cup, quick race, free driving and mini games. Winners cup is a series of four races, one race at each location. Winning the winners cup unlocks the villain characters, one for each of the main characters. Quick race mode allows you to pick which city you would like to race in and sets up a random checkpoint race. Random checkpoints means that each race is unique and provides new challenges. If you just want to explore each town without having to race around, then free driving is the mode you want to select.

Finally there are the mini games. These are unlocked in quick race mode by getting home town wins. The mini games available include treasure hunt and tag. In treasure hunt you race around Bikini Bottom trying to gather the most treasure, but go fast because the other racers are after the same treasure.

This game is a good game for the younger age group but play would be limited for anyone older than 10-12. For starters, the winners cup only has four races and can easily be beaten. The unlockable content is relatively minimal, meaning after an hour or so anyone out of the age group could have the entire game wrapped up.

For the younger age groups, Nicktoons Winners Cup Racing is a game where you can enjoy driving around as your favorite cartoon character. If you are in the age group targeted with this game, then the main races and unlockable content will keep you busy for hours. For family friendly racing adventures Nicktoons Winners Cup Racing is a great choice. 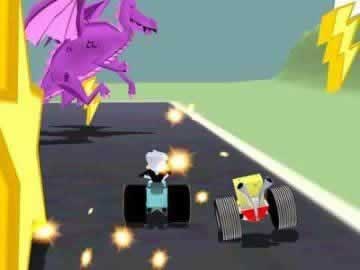 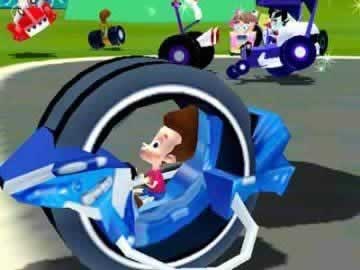