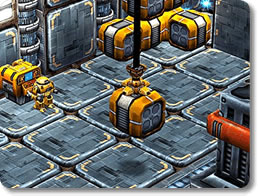 Do You Have the Skills to Solve Tricky Logic Puzzles, Hack Into Dangerous Computer Networks and Outwit a Maniacal A.I.?

The interstellar colony ship Eidolon is heading toward the planet Prime with its human travelers deep in cryo-sleep. Only the robots move about the ship, caring for the humans and maintaining the ship.

But when Eidolon's A.I. malfunctions, it's up to the lowly service robot Asimov to venture through the perilous, massive ship to save the robots and humans and defeat the maniacal A.I.!

In this blend of 3D platform, role-playing and puzzle game types, you control Asimov. Help him move crates, make repairs, collect important items and much more by guiding him with the arrow keys or mouse. Solve puzzles such as pushing crates to make a pathway or to block off certain robots.

Earn energon to repair Asimov, and if Asimov has all three lives, the energon will be stored as cash. Also collect items to use in RPG-style turn-based combat. In combat, you'll move into hacking mode and use items or programs to attack enemies. You'll use ghost hackers to do battle and each has its own stats like energy and damage.

Post your high scores on the online leaderboard to compete with the best players. Once you finish the game, you can play on a harder difficulty level for an added challenge!

Exciting and Challenging for All Ages

This exciting game makes it all too easy to be drawn into its unique science fiction world and you'll find yourself addicted before very long!

The unique blend of RPG, platform and puzzle gaming add great variety to this game and will keep you very busy. Gamers of any age can enjoy helping Asimov and putting their brains to the test with some tough puzzles!

Help Asimov save the robots and humans before time runs out in Mr. Robot!

Mr. Robot brings a delightful mix of RPG, Platform, and Puzzles gaming to the table that you might not expect given its small size and simple name. Perilous jumps, turn-based team combat, and various puzzles are just some of the highlights that show just how diverse this game can be. Add a futuristic plot with a renegade AI in control of of a ship deep in space, and you've got the recipe for an excellent adventure.

In Mr. Robot, you control a robot named Asimov aboard the spaceship Eidolon. You'll find this huge spaceship packed full of what feels like countless rooms. These rooms often contain puzzles you must solve or enemies and obstacles you must avoid as you work your way through the ship. In some rooms, you'll have to push crates to form a stairway, or even use a crane to complete the task when the crates are too large for you to tackle yourself. Other rooms require you to travel narrow walkways high above the floor while dodging rogue robots. There are even more rooms that contain corrosive liquid coolant that you must jump over or form a bridge across with crates. Each room is unique in the challenges it contains.

Not only will you be able to explore the spaceship, but you'll often need to explore the other robots in what is known as “ghost hacking”. In ghost hacking, you move from node to node with the robot searching for the creatures responsible for causing it to go rogue. When you finally come across them, a battle will begin between your team and theirs. Initially, you start out only with Asimov. As you progress through the game, you'll gain more allies to build and strengthen your team. Similarly, the enemy teams will grow larger and tougher as well. Once you've defeated the enemy, the robot will return to normal and your team will gain experience points and various items that can be used for upgrades or repairs in battle. It's an addictive and exciting RPG mini-game within Mr. Robot.

While there is only one difficulty setting in Mr. Robot, the game provides a good balance between being too easy or too hard. Objectives and goals are clearly laid out. Additionally, you can go back and review any communications or messages at any time from the menu if you forget what you're doing. There's a map provided to help out as well, but it's not all that clear or easy to read and isn't that useful. There are also a large number of save points and health pick-ups provided, so even if you make a lot of mistakes you'll still be able to work through the game.

Easy to Use Controls

The controls in Mr. Robot are quite simple, and introduced to the player through the first mission in which you must stop a rogue robot. Asimov can be moved either with the arrow keys or the mouse. He can jump and interact with the Control and Shift keys or alternatively through the Left and Right mouse buttons. Despite the simple controls, movement can be a challenge. It feels as if Asimov is sliding across ice when he moves, which makes jumping on boxes and navigating narrow platforms more difficult than it should be. The camera doesn't make it any easier to accomplish either. The fixed camera angle occasionally makes it difficult to see important things such as your character, enemies, and doors. It also adds to the challenge of climbing and jumping the various boxes and platforms you encounter.

Crazy AI - Where Have We Seen That Before ?

Mr. Robot includes and interesting story that begins before you even start playing the game. You control a lowly robot named Asimov aboard the spaceship Eidolon. It is your job, along with the other robots, to maintain the ship while the human passengers are frozen in cyrostasis. However, it quickly becomes apparent that something is wrong with the ship's AI. Humans are beginning to die and rogue robots are activating and running loose all over the ship. It's left up to you to save the day. The story makes a great addition to the game.

The graphics in Mr. Robot are simple and dated compared to many modern games. They look like something straight out of the 90s. At the same time, they don't really detract from the fun and excitement of the gameplay. If you want cutting-edge graphics, Mr. Robot might not be the game for you. However, the retro look and feel of Mr. Robot just might be nice bonus (especially for older gamers).

Mr. Robot is a great choice for anyone looking for a fun and enjoyable experience. The combination of different gaming genres means that there's likely something for everyone. You can explore an untold number of rooms, each with their own unique layout and challenges. You'll take on enemies in team combat and become more powerful with each victory in the ghost hacking mini-game. Camera and control issues can be annoying at times, but that pales in comparison to all the great things this game has to offer.

Check out the puzzle action and robotic combat of Mr. Robot with this game trailer. 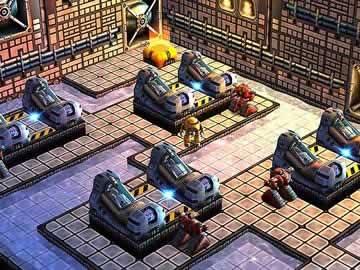