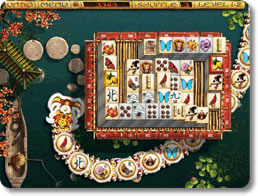 Catch the Thieves Before they Escape in the Adrenaline Pumping Mah Jong game Liong: The Dragon Dance

Sacred Chinese Dragons are Being Stolen!

Thieves are stealing the Liongs, sacred dragon symbols, from the kingdom! Can you catch them before they get to the gates and escape?

Match tiles to clear them off the board and reveal more tiles underneath before the Liong reaches the gate. Be careful to make good matches or you may end up with the tile you need stuck under other tiles while the Liong is just inches from the gate!

After every few levels, you'll be challenged with a mini game, including a fast version of bingo and a memory game of matching pairs of concealed tiles. Once you've completed the 60 levels of normal mah jong, try the 60 levels of the puzzle version where you match tiles with pictures on the Liong instead. There are three difficulty levels for each version, ranging from easy to extremely challenging.

An Entertaining and Fast-Paced Challenge

This fast-paced, demanding game will leave you breathless as you try to make strategic matches at a moment's notice. This game supplies hours and hours of intense gameplay with great replay value and gorgeous Chinese-style graphics and music. Once you enter the breath-taking world of Liong: The Dragon Dance, boredom will have no idea where to find you.

Ready for a challenging rush? Start solving mah jong puzzles and save the Liongs now!

Liong: The Dragon Dance is an adventure based mahjong game that has you on a quest to find thieves that have stolen the sacred Liongs (lucky dragon masks) from the Emperor.

The game has two game modes (puzzle and mahjong) and incorporates mini-games like “bingo” into the play. This is a fast-paced mahjong game that is great for players seeking excitement in their mahjong game, however, more casual players looking to relax might want to continue looking.

Mahjong, for those of you unfamiliar with the game, is a Chinese tile matching game. Each level presents a new layout in the game, and it is your goal to match all the tiles, leaving nothing unpaired. Mahjong combines acute calculation, skill, and strategy, as well as a great deal of luck. Often times skill can be the dominating factor in the game. Liong: the Dragon Dance incorporates this traditional style of play into a new, fast-paced game that requires not only accuracy, but also a great deal of speed.

In this game you can play in either the puzzle or the traditional mahjong setting. The object of both games is to match tiles in order to stop the dragon from breaking through the gates of the empire with the sacred Liongs. Through quickly matching you delay the progress of the dragon, eventually to a point where he is unable to bring down the wall.

Puzzle mode departs from the typical mahjong style of play. In this you match tiles with like tiles, however, rather than match tiles on the game board, you match tiles from the game space with tiles that make up the dragons back. Each time you match a tile the speed of the dragon is decreased and it takes a step back. Continue this process of matching until all the tiles in the given layout are gone. Special pieces are incorporated in this mode which help with your success. You can earn tiles that get rid of five of the game board tiles or you can match pieces that will remove 5 letters from the dragon, drastically decreasing its chance of busting through the gates.

The traditional style of mahjong is also incorporated in this game with an interesting twist. Rather than just have to match tiles with like tiles on the game board in a relaxed fashion, this game has you racing the clock to again stop the dragon's forward progress. Matches make the dragon move backwards increasing the time you have to solve the puzzle. This version of mahjong is very similar to the traditional game, however, it is much faster and more intense. The special tiles are also incorporated in this mode of play and are found to be just as useful.

Success in this mode as well as in the Puzzle mode results in a chance to play the mini-game “Bingo.” In this there is a bingo card full of tiles. On a conveyor to the right of the screen are more tiles that drop at a fast rate. Your goal is to match the tiles on the card to the tile on the belt. If you successfully carry this out you make bingo and earn a hefty supply of bonus points.

Though features like the mini-games and Bingo add a new element to the game, there is a great chance you will still experience spells of monotony. This game can get old because even the different modes are very similar, and there is little to no variation level to level. Several other features missing in this game are a multiplayer mode, online play, design your own layouts, and downloadable layouts. Not having the ability to play online or download new layouts via the internet limits this game.

One of the main elements of the traditional tile game is setting up your own pieces, so not being able to in this game is limiting. More layouts would be an easy addition to the game, making the game much better.

Conclusion - For Those Who Want to Go Beyond Basic Mahjong

On the whole Liong: The Dragon Dance is a fun adventure based mahjong game. The quest elements as well as some of the mini-games are surprisingly entertaining. Though some of the games can get old quickly, they typically do not last long, making them bearable. This game would be great for anyone just getting into mahjong, or for a seasoned player looking for a change up. Liong: The Dragon Dance is a fast-paced mahjong game and definitely worth a try. 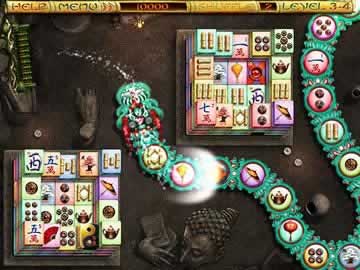 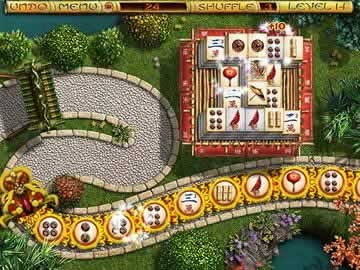