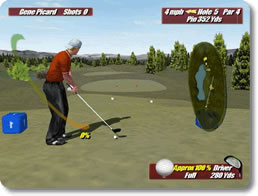 Perfect your swing because it's time to get on the leaderboard! Get out on the golf course and practice your golfing skills by yourself, with up to three friends and in various gameplay modes. Here's your chance to become a pro!

Create your own character, then experience the greatest courses of the European and USA tours. Play Championship Challenges or Match Play with a friend or play Practice Mode or Quick Round.

This game is very realistic and lets you practice creating a regular swing just like in real life. With well-done ball physics and varied, detailed courses, you'll feel like a pro in no time and get in tons of great golfing practice!

Practice makes perfect and this game offers plenty of realistic chances to practice. The next time you get on a real golf course, you'll be thanking this game for giving you the chance to improve your swing and learn great tricks!

For some great golfing practice and the chance to get on the leaderboard, play Leaderboard Golf now!

Leaderboard Golf is a realistic golf game that has you teeing up on eighteen holes to get the lowest score you can. You're given a great deal of controls over your shots, from the amount of power in your swing to how much you hook the ball. There are a variety of modes where you can get familiar with courses and techniques, or compete against a huge number of opponents for a championship trophy. Add in multiplayer action that lets you take on friends in many of the modes, and you've got a good golf game.

Each Golfer Has Unique Abililites

You begin your game by selecting a game mode, and then the golfer you want to use. Your choice is important because golfers have different abilities such as experience and stamina. Which golfer you choose will have an influence on your game. After that, it plays just like any other game of golf. You play 18 holes, with your goal being to hit the golf ball into the cup on a hole in the fewest number of strokes possible. The lower your score is, the better your performance.

The game includes help that gives you an idea of where your shot is going to land, and the amount of power you need to make a good shot. However, it is still difficult to tell where your shot is going to land. You can easily hook the ball on a swing, sending it far away from where you thought it would end up. Not using the recommended amount of power also means that you won't really know how far your shot will go. Putting suffers from similar issues as well.

Leaderboard Golf has three different courses to play on. These courses all have eighteen holes, and bring a variety of layouts and challenges. One course may be fairly simple and only contain a few hazards, while another may be filled with a large number of water hazards and sand traps. The drawback when it comes to the courses in the game is the limited number of them. While you can get a lot of play out of three eighteen-hole courses, it won't be long before you've played them all several times over. The game has some great courses, it could just use a few more.

Game Modes From Practice to Competition

There are also several modes of play to choose from when playing on a course. The Practice mode lets you play a course alone and improve your skills and shots for use in the other modes. Match Play lets you take on a friend on one of the courses. Match Play rules are a bit different as well, as each hole is a competition rather than all eighteen together. All that matters is getting the lower score on each individual hole, rather than your total score. Whoever gets the lower score on each hole wins that hole. Stroke Play lets you take on a friend or practice, and is played normally. The Championship mode lets you compete for the trophy on a course against tens of other golfers. Up to 4 players can participate by taking turns on your computer.

A Bit of a Learning Curve

Leaderboard Golf is a game that starts out fairly challenging, because you are not used to the courses and swinging. As you play more and practice, however, your scores improve and the game becomes easier. There are no difficulty settings, which could have made the computer players more competitive for you, but the game is not overly difficult or challenging.

While the controls in the game are fairly simple, they're a bit difficult to learn since the game doesn't explain or show them anywhere. You're left to discover them on your own via experimenting. You aim your shot with the mouse, left click to begin your swing, and then move the mouse up and down to set the power and swing your club. You can learn how to do it on your own, but it'd be better if the game had some reference for the controls. It could explain the basics, as well as some of the more advanced techniques (like hooking the ball on your swing).

The graphics in Leaderboard Golf are hardly cutting-edge, but they are on par with many other similar games. The quality is pretty good and they work well for the game. There isn't a lot of sound, but that's not unusual for the sport of golf. There are a few authentic type sounds, and you won't mind the lack of noise in the game.

Overall, Leaderboard Golf is a good golf simulation game. There are a few issues like telling where your shot will land or the small number of courses, but those don't really hurt the gameplay a great deal. You've got several modes of play that let you learn the ropes or compete for the lowest score. You can play with friends as you take turns on the same computer. You've got a lot of control over your golfer's swing. This game is a perfect choice for anyone who enjoys or is interested in golf. 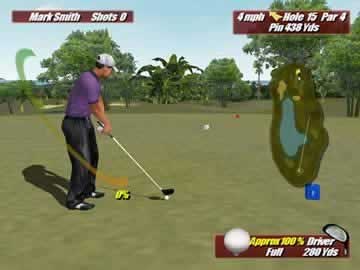 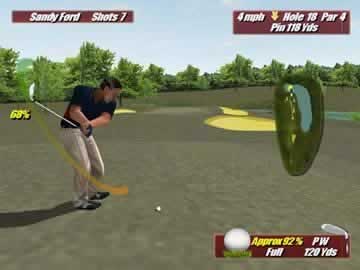