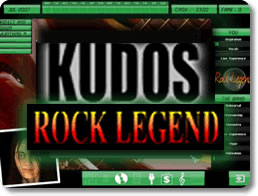 Put together a rock band and rise to Superstar status!

In Kudos: Rock Legend, you are the star! Your job is to form a band and go from unknown to global superstars!

Select a band name and customize your Avatar with many different looks. Audition new band members for each instrument type and then write your own songs. With enough tracks - record albums, and find a publisher.

Manage your band members, upgrade instruments, performance light effects, and more! Book gigs for your band to perform for cash, listen to music or go see other band's gigs to get inspired. But don't forget to post flyers, and remember to bring enough T-Shirts.

When your band has grown you'll need roadies, transportation, food and better gear. Are you a rising star or will you burn out?

Kudos: Rock Legend is a life simulation game that lets you control a rock band on the rise. Your band members, your rehearsals and what you do with your free time is all up to you. Interaction with your band is improved over previous Kudos games. You have five years to make it big as a band and reach the top. People simulation enthusiasts will love this game and have a blast playing it for hours on end.

Hints and a Tutorial Get You Going

You begin the game with either a short tutorial or by just jumping straight into the action. Either way there are tips and hints throughout the game. You will only be able to select from the pre-made characters, so there is no customization. You are the vocals for your band and you will need to hire a bass player, drums and at least one more instrument. Once you have your band you will have to start making songs, booking gigs and practicing your instruments. To better your reputation and the attendance at your gigs you will need to upgrade your show and instruments.

Controls in the game are very simple to learn either through the tutorial or trial and error. The mouse controls most everything and the number keys are used for practicing your instruments. The game is entirely text based, so when you play a gig you won't see it but you are given a summation of the events (how it went, reputation gained, how much money you made...).

Earn Money to Advance Your Career

You will earn money every gig that you play so the more gigs you play the better. Money can be used to purchase the upgrades for your band that are needed to progress further. There are a few activities that are free but most others will cost money. To create new songs you have to organize note sequences in the best manner you can. Practicing instruments is accomplished by repeating a sequence of numbers displayed on the screen.

Graphics really don't contribute to this game since it is largely text based. Background pictures and the profile pictures of your band members are the only real graphics in the game. There is also very minimal sound to the game. The lack of much sound and graphics leaves the game feeling empty.

Can Become Repetitive, Especially If You Can't Make Money

While there are plenty of choices to make the game can quickly become repetitive, especially in the beginning. When you don't have much money all of the activities and items are out of reach. Eventually when you can do a variety of things the the game moves a lot faster. A lot of people will be bored in the beginning of this game, but if you stick it out it will be worth it in the long run.

Kudos: Rock Legend does an excellent job of making a people simulation game, the interaction with the band will keep most people interested and wanting to play. The lack of graphics is more than offset by the options and capabilities of the game. Players of any age could understand and pick up the game easily though it might take younger players a little longer to learn. For a text based game this does a great job of keeping you sucked in and wanting to play. Give this game a try and decide for yourself. 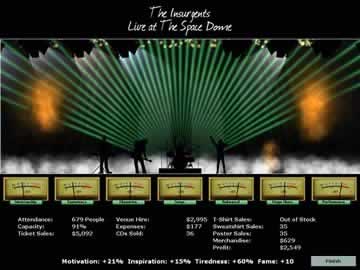 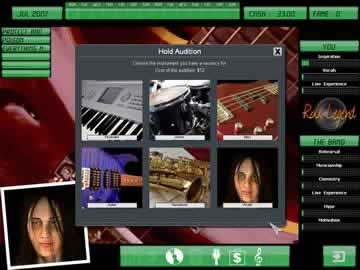