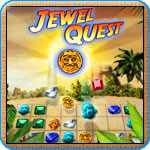 Make matches and turn the board to gold. Great puzzles and adventure story!

Jewel Quest advances the popularity of match 3 games like Bejeweled 2 but takes it to the next level.  Not only do you need to match shapes, you must also turn the board to gold which happens a bit at a time with each 3 or more in a row you complete. Also included is a great story that develops after each puzzle completion, leaving you wanting to find out what happens next.

You find the remains of an ancient Quest Journal, detailing an adventure for great wealth and lost artifacts. The Journal explains that at the end of the Quest lies the Temple of Fifth Sun, containing both gold and glory.

The path to the final Temple is shrouded in secrecy and twists you can't begin to imagine. To find each step of the path, you must solve puzzles that will turn ancient relics to gold and give them life and more importantly, allow them to share vital clues that will unlock the next crucial leg of your journey.

As you adventure through hidden jungles and up ancient mountains, the puzzles become more intriguing and thought provoking. New twists appear, attempting to thwart your progress to the Fifth Temple.

Jewel Quest will take you through hidden cities, skeleton lined mountain paths, and four temples on your way to the final goal. Each leg of the journey gets harder and harder and only a true puzzle adventurer, determined on achieving their quest, will make it through.

Jewel Quest is a wildly successful franchise that has journeyed into some surprising genres, including hidden object puzzles and even card games. The main game that started it all is the original Jewel Quest, which is strictly a pure match 3 puzzle game. How does this game stack up against others in the match 3 genre? Has it withstood the test of time? Read on to find out!

Jewel Quest has a stunning number of puzzles for players to work through. There are 180 core puzzles and several side quests to keep players busy, and the environmental settings vary wildly, ranging from the desk in an office to the fiery depths of an ancient temple. The grids also vary in size, changing the gameplay of the puzzles considerably. Most of the puzzles require several attempts to solve, so this makes for one very large game.

Jewel Quest presents players with grids containing various relics. These relics will disappear from the grid when a match of three or more is made, and more will fall to take up the space cleared by the matched ones. Matches are made by swapping two adjacent relics. The puzzles are timed, and failure to clear a puzzle in time costs a player one life. The game starts players out with four lives, and additional lives may be earned by achieving high scores on puzzles. Whenever a match is made on the grid, the background becomes gilded with gold, and turning the entire grid gold clears the board. This sounds easy in theory, but it's difficult in practice, especially at higher levels.

The gameplay is summed up nicely in this quote from the Jewel Quest Journal:

The writer of that journal entry admitted to being driven to the brink of madness by these very puzzles, yet some inexplicable force compelled him to try them again and again. This is actually a very good description of what playing this game is like, minus the insanity. The puzzles are never unsolvable or unattainable, and it's always easy to see how close you came to clearing the level. This is motivating in the best of ways, and it makes the game a manageable challenge.

It can be difficult to naturally incorporate a story within a puzzle game, but Jewel Quest tells the backstory through a series of flashbacks found in the entries of an explorer's journal. This is the simplest way to include a story, and it's also the most gripping. Want to read the next journal entry in order to find out what happens next? Better get to solving that puzzle then! It's perfect.

The journal even has detailed sketches of Mayan statues and relics scattered throughout, permeating the game with an exotic adventure theme at every turn.

The music for this game sounds more like the score for an action packed adventure movie than a puzzle game, and it fits the overall theme of this title very well. Tribal drum beats, soaring horns and detailed orchestral instrumentation lend Jewel Quest an epic vibe without distracting players during gameplay.

In the options menu, players may choose to turn off the higher quality graphics, giving players with older computers the opportunity to enjoy this game at decent speeds.

It's satisfying to move up in rank. There is nothing like advancing from a lowly researcher to a seasoned explorer!

Board is Frozen During Chains

Chain reactions are sometimes created by making a match that leads to other matches falling into place on the board automatically as new relics settle and claim the empty space. This is a great way to rack up the points, but the board is immovable during these reactions. Chain reactions happen quite often during the first few levels, and it can be frustrating to sit back and watch the game basically play itself. At the higher levels, it would be interesting to be given the power to manipulate the game board during these types of plays.

One minor complaint I have regarding Jewel Quest is its controls. It always takes two clicks to move the relics on the board. First, the relic is selected with one click. Then, an adjacent tile is selected with the next click. This works, but it's much slower than clicking and holding the left click button on the mouse while dragging the selected relic in the direction you want it to go. These slower controls take some getting used to, and having the option to click and drag would have been nice. Still, it's not a deal breaker.

There is only one puzzle mode in the entire game, which is surprising. This limits replay value considerably once the game has been completed. Fortunately, the game offers a wide variety of puzzles to clear before the game is considered complete and that helps to offset the lack of other game modes.

Jewel Quest takes the basic match 3 style game and makes it a thoughtful puzzle requiring skill, strategy and patience. Puzzle lovers are sure to appreciate this well made game. Overall, the game scores a 7.5. There is room for improvement, but the game offers a thoroughly satisfying experience. Pack your bags and get ready for an adventure, because untold treasure awaits! 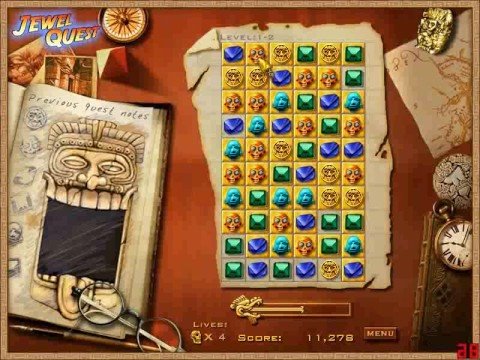 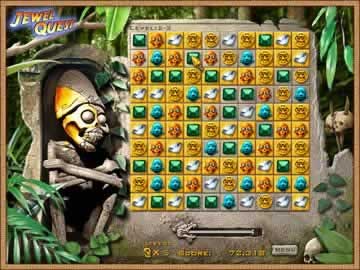 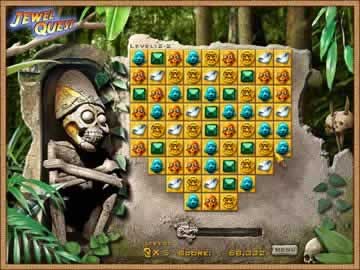