Uncover the Mysteries of a Spooky Old Hotel in the Creepy Hidden Object game Haunted Hotel! 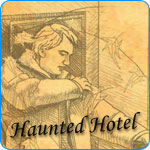 A Spooky Hotel That Won't Let You Escape

His car crashes along the side of the road while a storm rages overhead. Desperate for help, he enters an old hotel that seems oddly deserted. The man takes the elevator up to investigate, but when he tries to return to the lobby, the elevator has a mind of its own. He's trapped!

Face spooky rooms where time and weather no longer follow the rules as you help him discover the mystery of the hotel and restore energy to the elevator so he can escape this nightmare!

Follow the creepy story as the man explores the mysterious hotel. Race against time to find hidden objects in intriguing rooms where snow falls on ice-covered furniture and plants grow out of picture frames.

Play mini games to power up the elevator. Catch orbs of energy by clicking on them or play games like grabbing moving letters to spell words, building jigsaw puzzles and repeating sequences of flashing symbols. Too bad you never know which floor full of frightening mysteries the elevator will take you to next!

Playing this game is like being in a scary mystery movie as you follow the vivid storyline and enter the rooms the main character experiences. The creepy soundtrack adds to the exhilarating experience of solving all the puzzles so you can escape. The excitement and adrenaline rushes of each new terror will keep you on the edge of your seat for hours as you desperately wait to see what happens next.

Take an exciting break from your daily life and enter a world where you never know what spook could be waiting for you just beyond the next corner!

Can Your Nerves Handle a Spooky Hotel?

The scenario has been played out time and time again. It's a fixture of the American Horror genre. You're driving on a deserted road in the middle of nowhere and it's well past midnight. The weather is surprisingly awful, the worst you have experienced, and suddenly you're car breaks down. Luckily there's a spooky abandoned hotel within walking distance so you decide to check it out, dry off, and phone for help.

Once in the hotel curiosity gets the best of you so you explore, and in riding the elevator you become trapped. It has a mind of its own and you are stuck exploring the abandoned rooms, uncovering hidden items along the way. This hidden object game is fascinating and has you exploring some creepy rooms, playing mini-games along the way.

Find Your Way Out!

So you're stuck in this hotel and your only way out is to explore the rooms and hopefully unlock clues. These clues are scattered throughout the game and you must find hidden objects to uncover the mystery. Each level of the hotel presents rooms that you must explore. The rooms are often themed and have objects scattered throughout. You might be asked to find rifles, umbrellas, lizards, swords, cups, or balls among hundreds of other things.

Hints Help You Out If You Get Stuck

To help you with your hunt you are provided with bonus items and hints. The hints are located at the top right corner of the screen. These hints illuminate part of the screen where one of the hidden objects is located. They are extremely useful and there are five of them per level. They replenish level to level, so use them to your advantage. The bonus items are also a crucial part of the game, as they add time to your allotted amount. These items are illustrated only by there silhouette, so finding them can be somewhat challenging, especially depending on their shape.

As you advance through the empty rooms and find all the hidden objects you must complete mini-games before advancing to the next level. The main reason you need to complete these games is to resupply the energy level of the elevator. Through playing a mini-game that has you wrangling in blue electric balls, you can harness enough energy to power the elevator, helping it climb one more level.

Other mini-games that help you unravel clues about why you are stuck consist of a match three game, a game that has you untying knotted strings, and a magnet themed game that has you spelling key words. The mini-games are a great addition to the storyline because they help break up the potential monotony of a hidden object game.

The sound quality is also pretty good, but could use some improving. There are sound bits that make the hotel seem super scary, and then there are clips that make the scariness sound super cheesy and interrupted. The graphics and sound aren't bad, however, they are certainly not the best.

As far as drawbacks are concerned this game doesn't have too many as long as you are a fan of the hidden object genre. As you might already know, hidden object games can become tedious after playing for awhile. You are simply finding hidden objects. The mini-games intertwined help break the monotony, however, to a certain degree it is unavoidable.

Also, though it has less to do with the gameplay and more to do with the game aesthetics, this game is loaded with punctuation and grammar errors. It's rather embarrassing for the game's developers to make so many simple errors. Again, this will not take away from the gameplay, however, it is an error that must be noted.

Overall, Haunted Hotel is a fun and spooky hidden object game that interweaves an intriguing storyline into a fun game. You will have to ride the elevator of this abandoned hotel to uncover the truth, powering it with energy you've won in the mini-games. Though there are parts of this game that may become tedious, the mini-games as well as the interactive hidden object levels should more than make up for that. This is a fun game that any fan of hidden object will certainly enjoy. 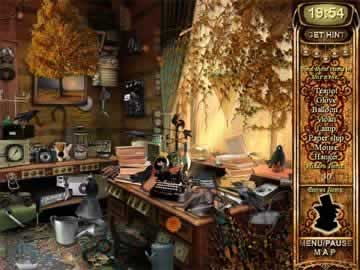 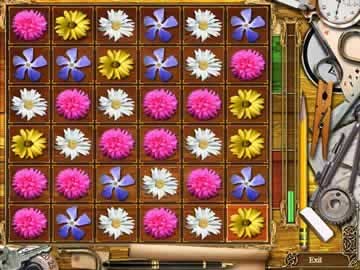