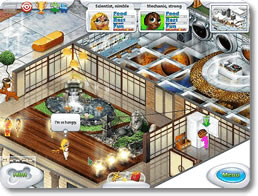 They're Trapped in a Snowed-In Hotel!

In the last frantic phone call she had with her father, a famous scientist, he begged for her help. Now, a snowstorm has trapped her and her friend in an abandoned, mysterious hotel filled with strange inventions and clever puzzles.

Help them track down the clues to her father's disappearance. Can you find out what's really going on with her father?

An Addicting Combination of Sim Strategy and Clever Puzzles

In this unique blend of simulation and puzzles, control both characters as you explore the hotel and unlock new rooms. Complete various objectives, like finding two parts of a key and glue to hold the parts together and then opening the correct door.

The sim part of this game involves keeping your characters well-fed, well-rested and happy. You can find butterflies, lanterns, chips and more to give your characters mood boosts so that they stay happy for longer.

Solve interesting puzzles like variations of Sudoku, trivia questions, rotating gems to form matches and more. Also solve inventory puzzles like getting a key out of the other side of a locked door by using a knitting needle to pry it out of the lock and a piece of paper to catch it.

An Adventure You Won't Forget

This game will get you addicted right away with the variety of unique puzzles, cute graphics and the fun sim aspect. You won't get frustrated because puzzles can be skipped and a checklist lets you know what tasks you need to complete next and gives hints about how to complete them. Enjoy exploring a mysterious, dangerous location and solving puzzles without ever leaving home!

If you're looking for an awesome adventure then play Great Adventures: Lost in Mountains now!

If you like mystery games, Great Adventures: Lost in the Mountains (LITM) is a good one. The people simulation aspect is relatively small and really doesn't add to the game much. Trapped in a snowed-in hotel, you will have to find hidden objects, solve puzzles and gather clues to figure out where your dad, the brilliant scientist, is and why he was in danger. A dog will guide you through the hotel and even give you hints if you offer him enough bones.

Escape a Snowed in Hotel

You begin by picking two characters who will be the pair to navigate the hotel. On the snowy road up to the hotel you are given the introduction to why you are going to the hotel when suddenly you go sliding off the road and wreck your car into the hotel parking lot. This is where you will meet the dog that guides you through the game. You begin with a brief tutorial that walks you through some of the controls and actions you will need to perform. After you complete the tutorial you are on your way to solving the mystery and saving your dad.

Controlling the characters in the game is done using the mouse. You can walk to locations manually or simply pick up and drop the desired character in any place you have already been and can get to. Performing various tasks like finding keys to open doors, repairing broken key cards, returning items to their proper place and solving puzzles is the majority of this game. The only aspects of people simulation that this game has is hunger, entertainment and rest. Keeping these full is unnecessary, but they do give you a speed boost. Collecting bones will give you the option of asking for a hint. Four bones will give you one hint and there are a lot of bones to be found. There are also various other things to collect that are unnecessary, but give you more reason to replay the game. Collecting lanterns, fish and logs will earn you additional hints.

Graphically this game is 2D and very cartoony but it suits the game well. The area is well detailed and includes plenty of extras to find. The snowy atmosphere is used well in making the game more interesting. Items will be frozen shut and need to be thawed out or doors will be blocked by piles of snow. The sound is minimal but not in a bad way. The necessary sound effects happen and there is background music. No other sound is really needed and would just serve to irritate the gamer.

LITM is a great escape/mystery game that will test your puzzle solving skills while you explore the snowed in hotel. The shortness of the game will limit this game a great deal, but it is still highly entertaining. Easy controls and the option to skip puzzles and ask for hints means anyone can pick up this game and have a great time. If you are looking for a serious people simulation game this isn't it, but for mystery and escape game enthusiasts this would be a good game to try out. 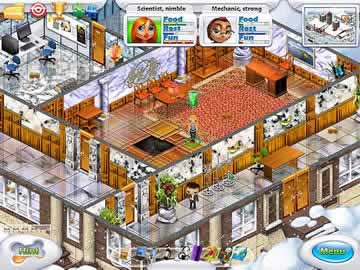 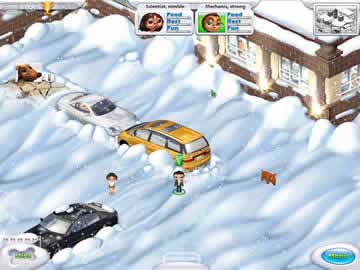