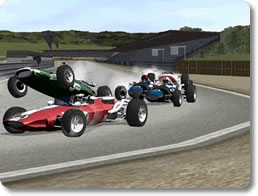 The mid 1960's was a time of racing legends, a time when race car drivers were the real heroes. Golden Age of Racing gives you the chance to relive the best years of Grand Prix racing.

These cars are high horse-power, no down-force, rear-wheel-drive works of automotive art! Push your car to the limit around ten of the most challenging tracks on the international circuit competing against incredibly intelligent opponents that know how to hold a grudge.

So strap yourself in to the seat and start your engine. Only your reflexes can save you now!

Golden Age of Racing puts you behind the wheel of an early open wheel racer on tracks all over the world. The racing takes place both on road courses and speedway style tracks so you can experience all types of racing.

Several of the good attributes of racing simulation games are apparent but this game also misses a lot of key elements. Leaving out the option to upgrade is the worst element this game missed.

Golden Age of Racing has three different modes of play: single races, championship mode and challenge mode. Championship mode pits you against the computer racers on a challenging series of tracks awarding points for the top finishers of each race. In challenge mode, you get to race the clock to beat your best times.

The challenge mode is flawed because you must beat your best time to continue racing. The best times you set in any of the modes are then set as your best time in challenge mode. So once you have raced on a track you can no longer run it in the challenge mode. In the single race mode, you get to pick your track and race only that particular track. In addition to the three modes of play, the difficulty can be adjusted from easy to pro to fit your level of play.

Some Realistic Elements But Not Total Realism

Several driving realism traits are well done in this game such as turning and drafting. When you careen into the grass your traction is reduced until the debris falls off your tires, making turning difficult. As for drafting, when you get close enough to the car in front of you, your car speeds up so you can pass. Damage is a factor but not realistic. If you crash into enough walls and cars, your wheels will begin to wobble, making the car slow down and controlling the car becomes more difficult. There is no visual damage to any other part of the car.

No Way to Upgrade Your Cars

Golden Age of Racing has several limitations. One of the limiting factors of this game is the lack of upgrades for your car. Leaving this out limits the appeal of this game since you are stuck with the cars given to you. You also can't gain any edge on difficult tracks by upgrading your car. If you get stuck on a race you just can't beat, it could be frustrating.

Another factor that limits this game is the lack of multipayer. To be a great racing game there needs to be some form of multiplayer so you can test your skill against other people instead of just the predictable computer.

Golden Age of Racing attempts to be a racing simulation from the “golden year's” of racing but falls short by leaving out upgrades and appropriate damage. For the casual gamer, this game would be a good starter racing simulation, but if you are a hardcore simulation fan looking for in depth play, then it is definitely not for you. 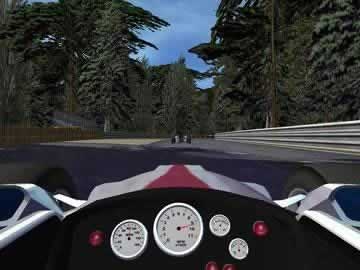 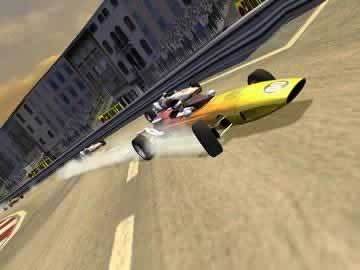