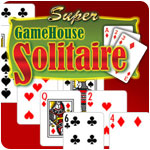 Play the extremely popular Klondike Solitaire plus 9 other games!

Gamehouse Solitaire Vol. 1 includes 10 solitaire games you are probably most familiar with.

Klondike is the game that almost everyone has played and a version is included with every Windows operating system. Addiction has you line up cards by suit starting with the deuce and ending with the King. Vegas Solitaire is similar to Klondike but now you are playing for money and each card counts!

Included games in this volume:

Gamehouse Solitaire offers ten different versions of solitaire for the both solitaire enthusiast and the beginning player: Klondike (the version that comes with every Windows operating system), Golf, Addiction, TriPeaks, Free Cell, Pyramid, Turbo, Crescent, Yukon and Vegas. Each has different rules and strategies, but for the most part the goal is the same. Generally, you must clear all the cards in the tableau (piles of cards you need to get rid of) by stacking them in some way.

Some Unique Solitaire Versions You May Not Have Played

Most players will not have encountered many solitaire games beyond the typical Klondike version. Gamehouse Solitaire does a good job of providing a How-to-Play feature that instructs you in fairly easy to understand language how to play each game. It explains your goal, the rules, and how to win. The How-to-Play window pops up every time you begin a game you have never played before, and is accessible at any time from the game screen should you forget some of the rules or require further help. This is a great feature and very helpful, especially for newer players.

Unfortunately, the audience of Gamehouse Solitaire is still pretty limited because of the nature of the game. It isn't something younger players would be able to grasp easily or even be entertained by, because there is little that is very visually or aurally stimulating. The graphics are fairly well done, and are relatively sharp and clear.

While they are better than most solitaire collections, the graphics will not blow you away by any means. There are no animations other than the cards moving around the screen and a dealer's hands dealing the cards at the beginning of each hand. There is accompanying music and sound effects. The sounds effects don't add anything to the game but don't detract much from gameplay either. The music is pretty entertaining, but nothing exceptional.

The gameplay is somewhat addicting for the solitaire enthusiast, but casual players will likely find it repetitive and potentially boring. The different games all end up feeling pretty similar, and there are no rewards or incentives to do particularly well, so playing can feel somewhat pointless unless you enjoy solitaire for itself. This limits the audience and means that most player will not want to play for very long at a time. 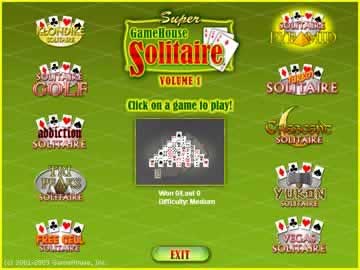 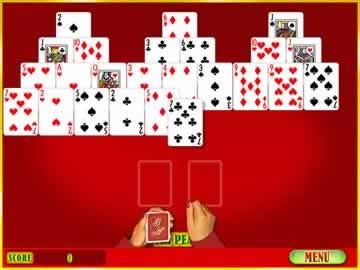