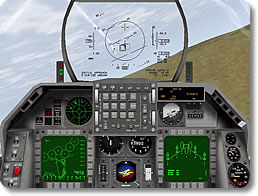 Fly a US fighter jet!

With innovative technologies such as fly-by-wire controls, sophisticated systems for night and all-weather operations and the ability to carry a variety of weapons, the F-16 continually proves to be the workhorse of the USAF.

Victorious in all of its air-to-air engagements, the awesome reputation of the F-16 is undisputed and now you can take the flight stick!

F16 Multirole Fighter puts you in a 3D cockpit that models the actual fighter. Check out the list of features below.

F-16 Mutlirole Fighter is a flight simulator that came from the partnership of game designer NovaLogic and aircraft maker Lockheed Martin and lets you jump into the seat of one of America's deadliest flying machines.

One of the nicest features of F-16 MF is how easy it is to get behind the controls and get into the air. While the game might be lacking in totally realistic aeronautics, the planes generally have a believable feel to them and it is easy to jump into the game, familiarize yourself with the controls, and be into the combat within a few minutes.

The graphics also help to draw you in, especially with the little touches such as the ability to see yourself in the canopy, the amazing 3-D cockpit, and exaggerated terrain heights so that its more fun to fly low on your approach to your target. Most of the avionics are controlled automatically, such as the plane automatically creates a shoot list so you can cycle through targets and your wheels even automatically retract after you take off, which means you can focus on the action as you blast away enemies with sidewinders and your powerful cannons.

Also, the mission design tool allows you to create your own scenarios and the multiplayer is just as addicting adding hours of additional gameplay.

Not As Realistic As Some Flight Sims

The only slight issues some gamers might have with this title is that there is a lack or realism, for instance most notable while performing the incredibly easy takeoffs and landings, and hard-core flight simulator fans might want to look elsewhere for super-realistic aerodynamics. Also, while the graphics are rather good, they are from 1998 and so may seem a bit dated in comparison to modern titles for some players.

Conclusion - Good Option for Those Who Want Action Not Accuracy

Overall F-16 Mutlirole Fighter provides a semi-realistic flight simulator that has more of an arcade style with plenty of enjoyable action. It is easy for new flight simulation players to pick this game up and be a flying ace in about only an hour of play. The large single-player campaign, mission design tool, and multiplayer means there is plenty of addicting gameplay to be found as well. While this title may not be to every flight sim fans' liking, it does provide a rather pleasurable experience and is just fun to play.

If you're still on the fence, at the very least try out the demo and play for an hour to see if the gameplay is right for you. 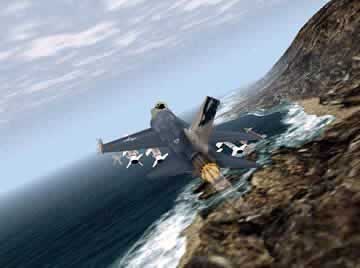 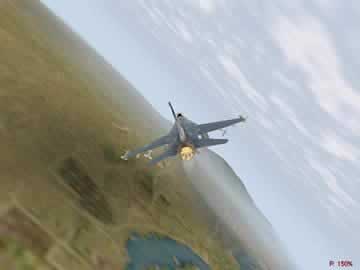