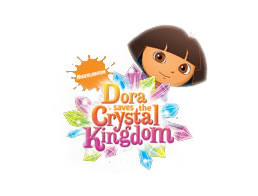 Explore Four Storybooks to Find the Crystals and Save the Crystal Kingdom!

Find the Crystals! Save the Kingdom!

The Crystal Kingdom was once a beautiful land of many colors, thanks to the presence of the Four Crystals. But the Greedy King wanted to keep them all for himself. So he snatched them all up, and hid them within four separate story books so that no one would ever find them! Without the crystals, the Crystal Kingdom has now become a drab, black-and-white world devoid of color and hue!

Not one to stand aside, famed explorer Dora, alongside her monkey sidekick, Boots, and their new friend from the Crystal Kingdom, Allie, set out into the stories to recover the crystals, defeat the Greedy King, and bring color back to the lands!

A Variety of Attention-Getting Games to Play

Dora Saves the Crystal Kingdom is never short on variety. In some sequences, Dora, Boots, and Allie work together, exploring the stories of the Crystal Kingdom, the Dragon’s Land, the Magician’s Castle, and the Butterfly Cave. They jump from platform to platform, cloud to cloud, collecting crystals as they go while avoiding the Greedy King’s dastardly spells!

In another, Dora singles out bunnies among other woodland creatures to catch. She also fills in the missing pieces in sequential patterns of gems, matches up words to their correct identifying image while inside a cave, and wakes up a giant caterpillar via the skill of song.

Don’t fret about anyone getting stuck! Dora is always ready and willing to provide help via fully voiced instructions for easy following and understanding. Your children will never once be lost!

Get the Kids to Pick Up New Skills!

As always, Dora is here to help your little ones learn a few new things along the way! They’ll learn about geometry by looking for a dragon behind various shaped clouds, practice their memorization skills with a rhythm game involving butterflies, figure out how to spell and pronounce words, and make use of color-identification when they finally confront the Greedy King once and for all! They may even pick up little Spanish as well, including how to count in that language.

Earn More Bang for Your Buck!

Dora Saves the Crystal Kingdom provides additional value by encouraging multiple replays! Unlock more and more prizes and rewards for each completion of Adventure Mode. Earn free, printable coloring book pages to bring color back to the Crystal Kingdom the old fashioned way; with markers, crayons, and colored pencils. And open all mini-adventures in Arcade Mode to play them again and again at any time!

Jae Onasi is a freelance writer, gamer, and family manager. When she's not saving the galaxy or fighting dragons, she's probably doing something else geeky like watching wild birds, gardening, singing in the church choir, blogging, making a cooking vlog with her kids, or baking something yummy.

Dora Explores the Crystal Kingdom in this Adventure

Dora Saves the Crystal Kingdom is a fun and educational game based on the popular character, Dora the Explorer. In this game, all color has been lost from the Crystal Kingdom. You’ll have to help Dora and her friends find four lost color gems to return the color.

The gems are hidden throughout the kingdom. Players have to complete different tasks to earn the four gems. This is a single player game for children who are in the five to eight year old range. It’s fun and educational at the same time.

A Loved Character Joins You

Dora the Explorer and two of her amigos will join you on your adventure. Children who love watching the ‘Dora the Explorer’ TV show will enjoy this game. Fans of educational games for young children will find it engaging and fun. Since it is designed for a young audience, older children will likely find it too simple. If they love Dora, however, they’ll likely play it at least once.

The game has four sections, one for each color gem. Each section is broken into three parts. In the first part, you’ll collect as many color gems as you can. The next two parts will have you playing one of the various mini-games.

The first part of each of each section is to collect different gems. These gems are scattered on the ground, on tree branches, and on clouds. It’s easy to jump to the branches and clouds to gain a higher score. You can even bounce off of mushrooms to reach gems that are out of reach. Walking along the ground will give you enough gems to move on to the next part of the game.

Once you’ve collected enough gems, you’ll come to the next mini-game. There are about eight different mini-games in all. These include matching shapes, identifying colors, or completing a simple sequence. In one mini-game, you’ll be shown a shape. You’ll need to click the cloud that matches that shape. In another mini-game, you’ll be presented with different colored crystal shapes that are arranged in a specific order. You’ll need to find the crystal that completes the sequence in order to move on.

Other mini-games will have you use phonics to pick the correct first consonant of a word or count in order. You’ll count six numbers in order for one mini-game. In a different mini-game, you’ll be shown a picture and the word for it with the first letter missing. You’ll be shown five different letters that can begin the word. You’ll be able to click on each one to hear the sound so that you can use phonics to pick the correct one.

For the final section, you’ll have to use your magic wand to combat the evil king’s magic wand by matching the color of your wand to his wand. Dora repeats the color names in both English and Spanish.

All of these sections are designed to help younger children become more familiar with shapes, colors, and phonics. It will also introduce them to some basic sound and visual memory skills and pattern identification, all of which contribute to learning success. This game does a great job of making all of those things fun to learn.

There are two difficulty modes: Easy and Hard. There isn’t much difference between the two, though parents might want to use the easy setting for children who have problems jumping in the gem collection portion. Besides a mouse, the only controls used are the space bar and two arrow keys.

Since this game is geared to younger children, many of whom may not yet know how to read, all the instructions are fully voiced. The directions are very easy to follow. There are no penalties for mistakes. You’ll simply play until you make the correct choice, and there are plenty of hints sprinkled throughout the game. A parent might want to try it once in case the child gets stuck on a particular mini-game so he or she can help out, but it’s very easy to learn.

The graphics and sound are true to the Dora cartoons. Players familiar with the cartoon series will instantly identify Dora in this game. The voice acting and music are also similar to the show. Dora sprinkles Spanish words throughout the game just as she does in the show, which helps the player learn some new vocabulary.

Once you restore color to the Crystal Kingdom with the four color gems, you’ll unlock an achievement for collecting gems and earn a prize. The prize is a fun coloring sheet that can be printed. You can repeat the game again if you’d like to increase your score gem-collecting score and unlock the next coloring sheet. Once you play four times, you’ll unlock all of the sheets. You’ll also be able to play in Arcade mode. This allows you to play any of the mini-games you’ve already unlocked.

The gameplay is so fast that older players can complete a game in about 15 minutes. Once you’ve unlocked all the mini-games in the first game, there are no other mini-games or levels too unlock. This limits replay value for older gamers. Younger children won’t be able to run through the game as quickly, so the play value will be higher for them.

Conclusion - Short and Targeted To a Narrow Age Range

Gamers who already know letters, numbers, shapes, and colors will likely think the game is far too easy and be bored quickly after playing through the game once. However, the younger gamers will find the short gameplay long enough for their limited attention spans. If they are still learning numbers, letters, colors, and shapes, they will find the game challenging enough. Younger children enjoy repeating fun activities, so they likely will enjoy repeating their favorite mini-games once those are all unlocked. In that respect, this game meets its goal of appealing to children aged six to eight. 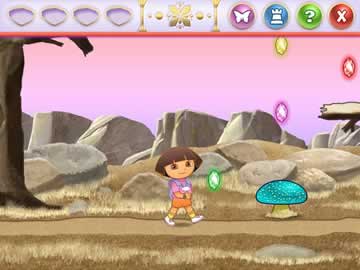 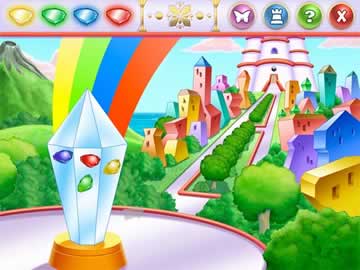