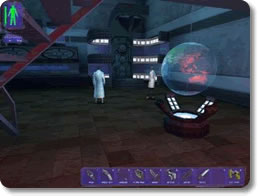 Editor's Update (10/21/14) - There is no longer an official free trial for this game. However, you can get the full version download at Steam

Game of the Year Edition of an award winning game!

It is the future. The US government has developed a new breed of agents no longer enhanced by machinery but by nanotechnology. These agents are now the next wave of counter-terrorist enforcement designed to keep the world safe - or are they?

Deus Ex is one of those games that is so good and so unique it is no wonder it is on almost every all-time greatist game lists in existence. A perfect blend of 1st person shooter, adventure, and role playing - Deus Ex is a ground breaking achievement never matched.

You play JC Denton, fresh from the academy and ready to test your nanotech augs to the limit. You are dispatched to take care of a terrorist group responsible for blowing up the Statue of Liberty and stealing the latest shipment of vaccine for a global epidemic.

As you dispatch the terrorists and capture the leader, you realize things aren't what they seem.

JC Denton is no ordinary agent. As you progress through the game, you will find enhancements that give you resistence to bullets, add to your strength, increase speed and jumping ability, let you see through walls, restore health, and even a personal spy drone you can release to scout ahead. You will get to choose what augments to upgrade JC with, letting you personalize this agent to your playing style.

Augmentation use drains power so you won't be wandering through the entire game invisible. Also, each attribute has levels of ability so level 1 invisibility will only give you so much protection compared to level 4.

When you accomplish missions, find hidden areas, or achieve secondary goals you will receive skills points to spend on your character.

Do you like to play nice and stealth like? Use your skills to upgrade computer and security system hacking ability. Are you more of a heavy weapons player? Upgrade this and use rocket launchers and explosives more effectively. Would you rather snipe from a distance? Upgrade your rifle ability to Master and you will be getting headshots from ridiculous distances.

Here are just a few things your skills will influence:

Not only can you upgrade your nano augs and skills, you can upgrades weapons too. Get scopes for your rifles, extra clip capacity for more ammo, range and recoil modifiers for your rifles, and speed loading for your auto shotgun. Fun stuff like this really makes Deus Ex a deep and enjoyable game to play.

If you are one of those gamers often dissatisfied by weak plots in games, Deus Ex will not dissappoint. Created by blending many popular conspiracy theories together, you will have a hard time not playing this game through as fast as possible to see what happens next.

From the Illuminati to alien technology to more surprises I shouldn't tell you, Deus Ex's story is just a whole heap of fun. If you are X-Files fan, let's say you will put this game on the very top of your favorites list!

You are an advanced secret agent genetically modified with nanotechnology. Deus Ex is a combination first person shooter (FPS) and role play game (RPG). JC Denton is the main character you will be playing as and upgrading throughout the many missions. Every decision you make can change the game so decide carefully and it could make your life that much easier.

The Future of Anti-Terrorism

The year is 2050 and you are JC Denton a United Nations Anti-Terrorist Coalition agent. You have been genetically modified by nanotechnology to be a super agent. Using your nanotechnology you can use specialized equipment that will unlock doors or even turn you invisible. Battling various terrorist groups and ancient secret societies, you will make use of a variety of different weapons and tools.

Trick Out Your Character

For each mission you accomplish you will be awarded skill points. Skill points can be used to upgrade various skills like handgun, hacking, sniper rifles, lock picking and more. Even weapons can be upgraded with silencers, scopes, special ammo and more.

Not a Straight Up Shooter

The gameplay is similar to most FPS games, but Deus Ex also incorporates elements of RPG's. For example, you earn skill points that upgrade your abilities. You can also modify your character with nano-augmentations. Nano-augmentations can increase your health or the damage you deal or personal cloaking ability.

The controls are fairly simple, WASD keys to move and the mouse to aim and fire. There are also several interaction buttons that need to be used on a regular basis. You will be able to use several types of weapons including lethal and non-lethal options. On the lethal side you will have handguns, crossbows and rocket launchers. On the non-lethal side you can use batons, pepper spray and a weapon similar to a stun gun.

Stealth is a huge element of this game. Many times you must sneak past guards or security bots that will slaughter you if you are spotted. Communicating with non-player characters can be interesting, many times you are given options of how to respond. Your responses can affect how the level will play out since you may miss vital information if you respond incorrectly. It is also possible to play online although there is a minimal online community to play against.

The graphics in Deus Ex are similar to that of Nintendo 64 games such as Perfect Dark or Goldeneye. They are not the greatest but this game was also released in 2000. If you are looking for cutting edge graphics the newer versions of this game might be a better choice. The music and sound is very well done. All the music adds to the suspense of being a secret agent.

The game does have a few minor glitches, the most prominent being the item tray locking. During play your item bar may lock. This wouldn't be a problem if your guns weren't also stored there. Not being able to change weapons, especially if you are on a non-combat tool, can be frustrating when you suddenly find yourself in combat. Also this game can be very hard until you master all the stealth techniques you need to get around. Alerting one guard can often lead to a massive swarm of guards you must kill or subdue.

Deus Ex is an excellent combination of FPS and RPG that will surely offer something for everyone. With all the violence this game may not be suitable for the younger audience. The few minor glitches don't even come close to detracting from the level of depth this game provides. With the multiple ways to complete a mission you can replay this game again and again. 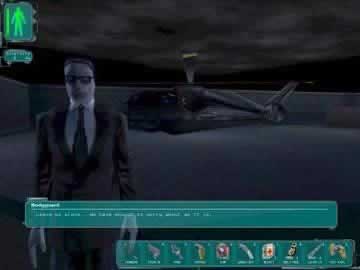 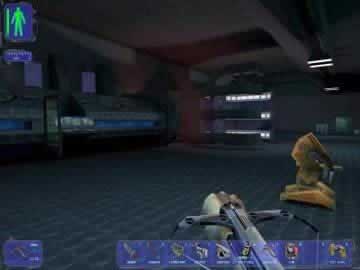