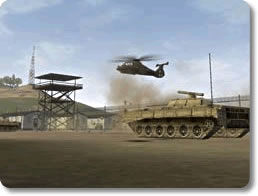 Feel the rush of flying an elite attack helicopter!

The best-selling Comanche series returns on your PC with this fast-paced action game that places you at the controls of a Comanche RAH-66 helicopter. Comanche 4 puts you in the seat of the mythical attack helicopter and lets you focus on what you want to do - blow crap up!

In 6 single player campaigns and multiplayer, the game combines serious firepower with effortless controls.  Each campaign has 5 missions so you will be flying for quite some time.  Your missions will require either stealth seek and destroy or just pure annhilation.  Either way, you will be rocking and rolling from the very first mission.

If you like to see things blow up, Comanche 4 will satisfy.  One of the highlights of the game is the special effects and they come quick and often.  The explosions are awesome and you have to see, and hear, them to appreciate it.  The sounds of your machine gun fire and rocket attacks are a real strong point and add to the excitement of the game.

If you get through the missions jump into multiplayer deathmatch battles through the NovaWorld servers.  Duke it out with other pilots like yourself trying to make a name as the best chopper pilot around. Between single and multiplayer game modes, you will have plenty of hours of helicopter fighting action whenever you want it.

So hurry up and give the free Comanche 4 download a try and fire up your rotors - your enemies are just waiting to be shredded!

While Comanche 4 can be classified as a flight simulation, it has a definite slant toward the casual player and the actual flight avionics and controls are simplified allowing even new players to figure out the controls and be playing within five minutes. Much of the gameplay feels more like an action shooter, in fact those familiar with 1st person shooters will understand the controls quickly.

Easy to Learn, Not a Hard Core Chopper Sim

The controls for flight are simple with preset altitudes and a “pop-up” feature to fly above a hillside, fire your weapons, and then go right back to your previous altitude. Your weapons also are easy to deploy since you just lock on, choose which weapon you want to use, and then the targeting computer will lead the target for you. While this might turn away some more hard-core flight simulation fans, the action from this is very fun and addicting as you fly around and try to take out enemy bases, tanks, and helicopters in a variety of missions.

As you make your way through the six campaigns, each with about five mission, you'll find yourself performing all kinds of tasks such as stopping pirates attacking a yacht, taking back an airport from terrorists, and supporting special forces. This variety to mission structure and easy to use controls all sum up to a rather gratifying and intense gameplay experience.

Levels Can Get Difficult

The only slight issue which came up with Comanche 4 is that the levels do get rather difficult early on due to the number of forces you'll have to face and that the enemy are very good shots. Add in to this fact that there is no in-game save feature and you could find yourself getting a bit frustrated attempting the same mission over and over again. In some cases though the challenge in completing missions actually adds to the sense of accomplishment you get when you finally find a way through a level.

Even with these slight issues, Comanche 4 is sure to please combat and flight sim fans alike with its stellar graphics, easy to learn controls, and intense action sequences. With the 30 single-player mission, fun multiplayer supporting cooperative play, deathmatch, and team deathmatch modes, and the senario editor, there are hours of gameplay to be found with Comanche 4. At the very least try out the demo where you can try out any of the campaigns for a limited time and get a taste for the addicting gameplay. 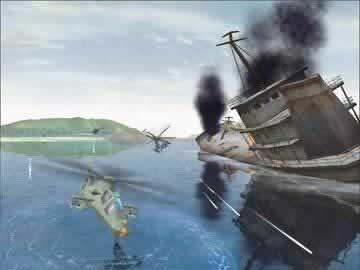 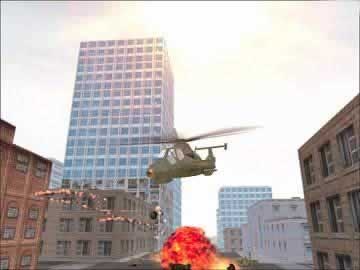