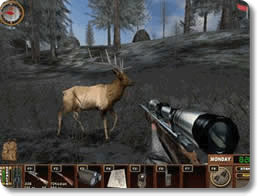 Experience the thrill of hunting 32 different species without leaving your house!

Cabela's Grandslam Hunting: 2004 Trophies is one of those hunting games that goes beyond the rest.  You aren't just confined to big game hunting or deer hunting.  Cabela's Grandslam lets you hunt 32 different animals and even 20 minor ones in 8 different locations around North America.

The right weapon for the right game is a critical factor.  Grandslam Hunting lets you choose from a huge assortment of rifles, shotguns, and bows including:

Not only can you pick weapons but accessories like cover scents, lures, decoys, calls, radios, maps, GPS and of course ammo.

Choose to hunt in the Pacific Northwest, British Columbia, Colorado, the Southwest desert, Northwest Territories and more.  Each location has its own unique cover and game.  Choose the Campaign game mode and you will hunt in all of them to become the grandmaster!

If you are looking for a solid PC hunting game and a fan of the Deer Hunter games, Cabela's is a good choice.  Give the free download a try!

Hunt everything from bears to squirrels in the realistic hunting game known as Cabela's Grand Slam Hunting 2004 Trophies. Buy tags and equipment as you prepare for your hunts. You have eight different locations all over North American where you can put your hunting prowess to use. You can tune the challenge of the game to your skill level with several difficulty settings. You'll need patience and cunning to be successful in this game.

You begin by creating a hunter. You'll name your hunter, and select what type of hunter you'll be. Your hunter can be a young man, old man, young woman, old woman, and more. The type you select determines the abilities of your hunter (cover, endurance, speed).

Customize Your Equipment Load and Tags

Once you've created a hunter, you can begin hunting at one of eight different locations ranging from Appalachia to British Columbia to Colorado. Before you can begin hunting, however, you'll need to buy some equipment and tags that let you kill animals. You can buy guns, scents, tents, and more. The tags determine what kinds of animals you can kill, and how many you are allowed to kill. Shooting or killing the wrong animals will earn you fines and penalties. If you accumulate too many penalties, your hunt will end. The need to buy equipment and tags adds to the realism and gives an idea of what hunting is like.

Track or Lure, Your Choice

Once you've made your purchase, you can start hunting down your prey. You can actively search out animals, using tracking to discover clues like snapped twigs or animal droppings, or try and use scents and calls to lure the animals to you. There's also an option to turn on dots that reveal the location of nearby animals if you need some help. The tracking and lures available add to authenticity of the game and require you to do some real hunting to score kills. Once you've collected all the animals allowed by your tags, you can end the hunt and begin a new one all over again.

There are two different modes to choose from in the game. The Quick Hunt mode lets you select any one of the eight locations you want and begin hunting. The Campaign Hunt mode takes you through each location. Your goal in this mode is to earn the best scores you can by killing and collecting the biggest animals with the best shots. Both modes of play also offer you a choice of difficulty settings ranging from easy to hard, allowing you to play the game on a difficulty setting that closely matches your skill level. Unfortunately, there is very little difference between Quick Hunt and Campaign Hunt. You play the same levels with the same goals and animals, the Campaign Hunt mode just takes you through all of them rather than a single one. As a result, the game can get a bit repetitive.

The controls in Cabela's Grand Slam Hunting are simple and should be familiar to anyone who has played first-person shooter games before. You move your hunter with the WASD keys, and aim/fire with the mouse. Other items (like scents and calls) can be accessed and used quickly via the function keys displayed on the screen. One downside to the control is the lack of any sort of introduction or tutorial to explain the controls and the items you use. You can buy and use scents easily enough, but if you aren't familiar with hunting you may not know or understand when you are supposed to use them. A tutorial would have gone a long way to making this game easier to pickup for newer players.

Graphics Not As Good As Other Hunting Sims

Another drawback for the game is the graphics, which simply don't match up to many other similar hunting games. The graphics are fairly simple and dated, detracting from the realism and immersion. Animals and objects look “blocky”, and many plants are paper thin. This game was released in 2003, and the graphics will certainly remind you that it is not new.

Overall, Cabela's Grand Slam Hunting 2004 Trophies is a decent hunting game with its ups and downs. You've got some great features like several sizable locations to hunt in, a variety of animals big and small to kill, and some realistic gameplay right down to buying tags and equipment. At the same time, you have to deal with issues like poor graphical quality and repetitive play. You can try this game and see if it is the perfect hunting game for you, but you'll probably be able to find a better hunting game to play. 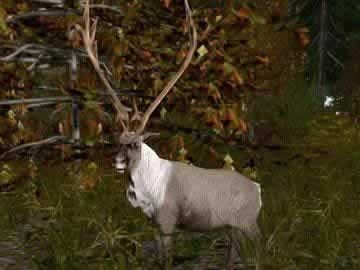 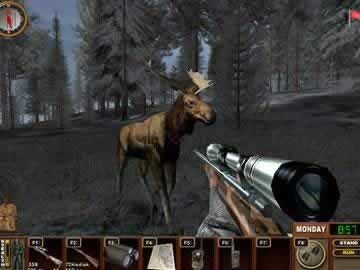