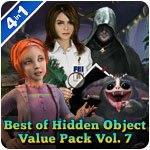 Get 4 top-notch hidden object adventures in this pack!

Get 4 top-notch hidden object adventures in this pack! You'll be entertained for hours with drama, mystery, and mind-blowing graphics.

Dreamscapes: The Sandman
Young Laura was well protected from nightmares once her father gave her the Dreamcatcher. But after his sudden death the Dreamcatcher disappeared and Laura slipped into an endless nightmare. No one could wake her up. But you can try to save Laura! With the help of Professor Sanders and his machine take a dangerous journey to Laura's ghastly dreams, dispel her awes, fight her fears, solve numerous riddles of Laura's subconscious and find clues to her redemption. Collect all the pieces of the lost Dreamcatcher and help the girl return to the real world with this breathtaking point-and-click adventure game!

Dreamscapes 2: Nightmare's Heir
Laura doesn't suffer from the nightmares anymore. But, despite the fact that it has been 2 years since she came out of the coma, she is haunted by the Sandman's promise of revenge. Laura and Tim decide to go skiing to take her mind off things. There, on the edge of the world, misfortune befalls her. In a fit of lunacy, Tim leaves their cabin and falls off a cliff. He did not die, but is in a coma. Is the Sandman to blame? Laura has the power to wake her husband, however has made a commitment not to use her power to her own benefit. Now she has 2 choices: watch as her beloved slowly dies in the hospital, or seek the help of an old friend (The Player) who once helped her. Laura decides to meet the old friend, stops time to pass by the doctors unnoticed and infiltrate Tim's ward. She then helps The Player enter the subconscious of Tim, whose body is almost seized by the Sandman. The Sandman is utilizing his old scheme: creating nightmares to suppress the will of the victim to resist. Will The Player have time to wake Tim before the Sandman turns him into his heir?

Jane Angel: Templar Mystery
As Jane Angel Templar Mystery opens, we learn that The Knights Templar were formed during the crusades to guard sacred places and holy objects. Their power and wealth grew, and in 1307, Philip IV of France disbanded the Knights and seized their store of holy treasures - including the Holy Grail - which have since been lost though history. Until now...Join FBI agent Jane Angel as she investigates what starts out as a routine case of medieval coin smuggling, but will soon lead her around the world in search of the missing treasures of the Knights Templar. Could she actually find the Holy Grail? All your questions will be answered in Jane Angel Templar Mystery!

Detective of Spirit World
It's time to prove that you are the cleverest in finding hidden objects. Test your speed with non-stop, round-based hidden object scenes as you put your memory and attention to detail to the test. Find objects, boost your score, and earn stars! If playing against the clock isn't your thing, enjoy the game in relaxed mode. 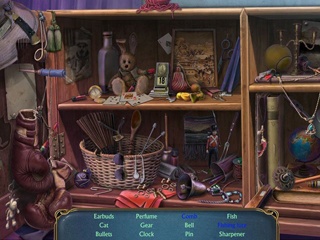 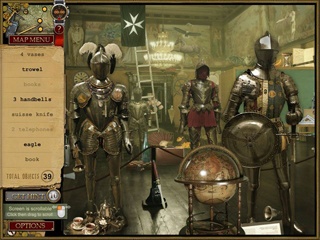