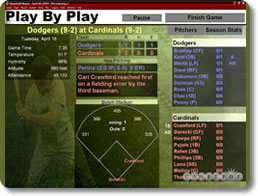 In Baseball Mogul, you can choose any team from 1900 to 2006 with a full roster of players - or an entirely fictional team of your own creation!

As General Manager (GM), your job is to build the best lineup of players to take your team to the World Series. You can make complex player trades and sign players to multi-year contracts as you build your team but you'll have to compete with the other General Managers and negotiate with the player's agents.

As GM you also have to manage all the finances for your ball club, making sure that the team doesn't go bankrupt. Raise revenue for your team by setting the price of tickets and concessions, and selling the TV broadcast rights, while you manage your team's expenses by setting the budget for your farm system, player scouts, medical staff, and player payroll. But be careful, because fans can be fickle if your team doesn't win or if your tickets become too expensive!

If you don't succeed in your first year, you get a new chance with Baseball Mogul's in-depth amateur draft. You pick and choose from the best high school and college talent around the world. If your new players are good enough, have them join your team right away. Otherwise send them to your minor league franchise for training and improvement.

A powerful game engine simulates each pitch of the game based on customized player ratings and over 100 years of historical data, assuring you the maximum realism possible! Baseball Mogul is designed to help you manage your team over many simulated years. Manage your team one day at a time, or let the computer simulate weeks or months at a stretch so you can play for virtual years or decades. As your players age, their abilities mature and decline realistically. Don't forget to build your team for the long term, rather than spending all your money on free agents this season.

Watch your team rise and fall in the standings, watch your bank statement, and read the news stories to stay on top of what's happening with all the ball clubs in both leagues. If you pick the right players, manage your finances well, and stick to a winning strategy, your team may win the Championship, and you too may become a Baseball Mogul!

For even more awesome baseball sim fun, give Baseball Mogul 2007 a shot.  Includes updates to graphics and game features.

Baseball Mogul 2006 puts you in total control of a Major League baseball team. You manage everything from ticket prices to player lineups in this detailed and realistic baseball simulation. You have an unbelievable amount of information and statistics to guide you along the way. As an added bonus, the game is completely free.

Set Up Your Season

You start the game by selecting the year you want to start in. The year you pick determines the statistics that will be used to simulate games. After you've selected a year, you can select which city you want the team to play in, the name of your team, the name of your mogul, the level of difficulty, and a number of other options to make the game easier or harder. Once you've selected all the options and advance, you'll begin your first season in the year you selected. You can play anywhere from one day to multiple seasons, and any games during that time period are simulated. You'll play through the whole season eventually, and then deal with resigned players and picking players in the draft. Then you begin a new season and start the whole process over.

You Decide Just About Everything

Not Much Action Here

The game also has its downsides. The biggest issue is the lack of action or things to do. While you control a lot of financial and player decisions, the games are all simulated. As a result, you often find yourself with little to do but simulate games until the end of the season. There is an option to watch play-by-play action for a game, but this doesn't add much excitement or action.

Baseball Mogul 2006 gives you several choices that let you adjust the difficulty level of the game to something more suitable for your skill level. The game also provides options that can make the game easier by removing some random elements or making players develop in a more consistent way.

In contrast to the complex nature of the gameplay, the controls in Baseball Mogul 2006 are fairly simple. Everything can be done via pointing and clicking with the mouse, or keyboard shortcuts. A hefty menu provides all of the information and options that you can access.

The presentation in the game is very simple and limited. There's very little sound, and there's very few graphics considering that most information is text. However, it doesn't really hinder the gameplay.

Conclusion - If You Want a Baseball Sim and Don't Want to Pay, Here It Is!

Baseball Mogul 2006 is a realistic simulation game that's going to have a very small audience. It's good at what it does, but most players won't find a lot of fun of success in a game of this type. You've got an incredible amount of information and control at your disposal to help you make decisions. You get to manage finances and your players in your efforts to win games and the World Series. There are some serious drawbacks to consider, but the fact that it's free means there is no reason not to give this game a try if you're at all interested. 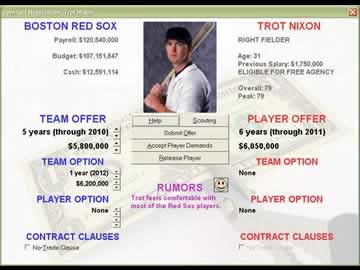 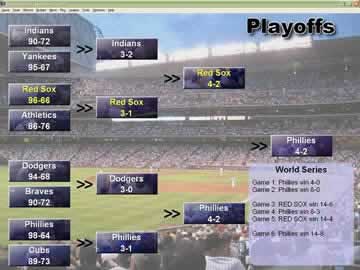