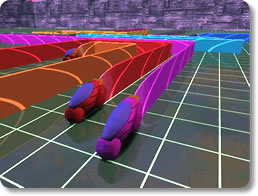 Jump In Your Light Cycle and Compete on "The Grid"!

"A Tron clone in 3D" has been the tag line of Armagetron since its development and is probably the shortest and most accurate description of the gameplay. For those who don't know, Tron was an arcade game based on the move of the same name, developed back in 1982. The original game was really just 4 sub-games, but the most popular of the games and where Armagetron gets its association is with the 'Light Cycles'.

Enter the fast-paced action of the 'Light Cycle' battles as you navigate your cycle around an arena while leaving a wall of energy behind you. Take part in 16 player mayhem, compete against highly advanced AI, and network all of this extreme 3D action without having to pay a dime.

The actual gameplay in Armagetron Advanced is actually quite simple to learn, but difficult to truly master. The main action begins on various grids where the players all start at predesignated positions. The 'light cycles' then start to move leaving a wall of light behind them wherever they go. The objective of the game is to get the AI to crash into one of these walls while avoiding running into any of them yourself.

You can change the direction of your cycle's movement by turning 90 degrees to the left or right, and some servers even make it possible to turn in smaller increments like 45 degrees. The closer a player is to a colored trail, the faster his or her cycle will move. This unique element allows players to accelerate and use the resulting speed advantage to outmaneuver their opponents.

What make Armagetron Advanced so much fun to play is the large and lively on-line community. There are various clans to join and large tournaments to be found at nearly any time of day. Additionally, there have been several game variants developed to mix up the gameplay, such as Fortress, Sumo, or Styball.

With the constant on-line development, you are sure to find hours upon hours of enjoyable action with this free title. Test your timing and strategic skills as you try to box in your opponents and maneuver your way to victory.

If you are a fan of the original or just like solid arcade style action, then download Armagetron Advanced today!

Armagetron Advanced at first, is almost overwhelming but once you figure out how to play, it all falls into place. Armagetron Advanced is based on the movie Tron and is similar to other games such as GL Tron. For those who are unfamiliar with GL Tron this game is an avoidance game. The players pilot a light cycle and leave behind a colored wall of light. Your objective is to eliminate the other players by forcing them to smash into a wall. The last player standing wins the round. Armagetron Advanced has an edge over GL Tron with the addition of online multiplayer capabilities.

Armagetron Advanced utilizes the internet, LAN and networking to enable multiplayer action. At first it isn't clear how to join an online game but if you use the S key to open a dialog box and simply type /login you will join the game. There are no instructions pointing to this which makes it difficult to find. There are also user created games available on the internet as the rules can be adjusted from the main menu.

Practice Against the Computer

Playing against the computer is a good way to practice for online play and also to get acquainted with the variations on the rules that can be adjusted. Rules that can be changed include: the length of the wall you leave behind, how fast the light cycles travel and also the size of the arena. There are also several adjustments that can be made to personalize your light cycle such as color and controls.

With all the options it can be daunting at first since there is no help feature or guide to get you going. It takes some time navigating through all the options and multiplayer features to get your bearings but after awhile you will be setting up you're own games. If you are a beginner to this game you will have a little bit more trouble but if you can stick with it, it will be worth it in the end.

The graphics of Armagetron Advanced are on par with similar games and suit the game fine. The only issue encountered was with the online text, it can be very difficult to read and it also scrolls by very fast. This can make figuring out the games very difficult for beginners. For advanced players you can miss whats going on in the game if you're not careful to read the text as it goes by.

Conclusion - For the More Advanced Player

Armagetron Advanced seems to be geared towards the more advanced players due to its more complex layout. With the addition of online multiplayer anyone who is a fan of similar Tron games will love getting to test their skills against others. So if you're an advanced player or a beginner who is willing to put in the effort and time of learning the game, this is well worth the download. 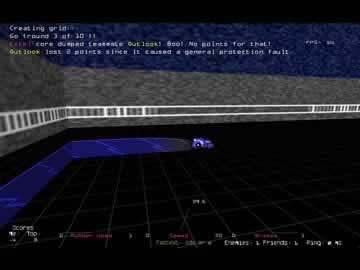 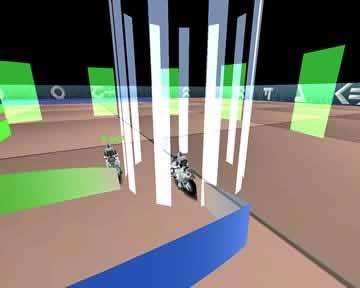