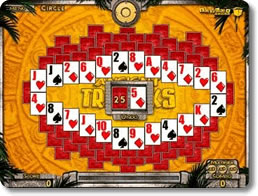 A simple and fun solitaire game that you will find yourself playing much longer than expected!

Ancient Tripeaks is a classic solitaire variation where you stack cards on a pile that are 1 away from the pile card. For instance, if the pile card is a 5, you can stack a 6 or a 4 from the Tripeak pyramid.

The game sounds simple, which is nice since it is easy to learn, but there is actually a fair amount of strategy involved. You will want to view all the showing cards on the pyramid to plan your stacking to clear as many as possible. Since Tripeaks comes with 8 pyramid variations, every variation is going to have its own difficulties and strategy to incorporate.

What many players experience with Ancient Tripeaks is its simple and addictive game play. You just find yourself playing more and more, wanting to clear more levels and beat your previous scores. Once you think you mastered one formation, change to another layout and find that it is a whole new game.

If you are looking for a new type of solitaire or card game, give Ancient Tripeaks a try. Rather than your typical solitaire set-up, Ancient Tripeaks arranges the cards face down in three side-by-side triangles, with only the bottom row face up. There is a stack of face down cards and single “starter” card. The goal is to clear the peaks by clicking on face up cards that are either chronologically directly above or below the starter card. Suits don't matter, just the value of the card.

If your starter card was a 10, for example, you could either click on a 9 or a Jack of any suit to place on the pile. If you get stuck, you can click on the stack of face down cards to get another starter card. It's a unique take on solitaire and a lot of fun to play.

There are no timers, so Ancient Tripeaks can be played at any speed you like. As you clear cards the meter at the bottom of the screen fills. This is the score multiplier meter, and fills up faster the more cards you clear without using a card from the stack. You have to be quick to get the score bonus though, because the multiplier meter begins to empty if you aren't making any progress.

Once you have cleared all three peaks, another round begins, and so on until you fail. When you finally fail, a score box appears, awarding you a score and a trophy that represents how well the computer thinks you did, based on time completed, score multiplier and how many cards you used from the stack. This is fun because it gives you something more to work for than just a high score, since it requires you to beat several rounds before you can win the highest trophies.

There are eight modes of play in Ancient Tripeaks. Unfortunately, these modes only differ in the arrangement of the cards. For example, in Circle Mode, the cards are set up in a circle, whereas in Stars there are four peaks, and in Double there are two decks to work through. The only mode that differs at all is

Turned, which has all the cards flipped over so you can see them, making the game slightly easier in some situations and strategic in others. The gameplay itself is rather repetitive and fairly easy, so the eight modes should have added a unique challenge to the game. Instead, there are eight modes of the same game and gameplay over and over, making the game boring.

Graphics and Sound are Below Average

The graphics and sound effects are also major drawbacks to the game. The graphics are grainy and blurry, very hard to see and generally not well done. The sound effects and music are loud and highly annoying. You can turn them off or down, but they really detract from the game when they are on. The interface also makes it very difficult to figure out how to turn them off, so less computer-savvy players will be forced to listen to the thundering, obnoxious noises throughout their gaming experience. The buttons signifying menu and other options are tiny and hidden on the screen, in fonts that blend in to the rest of the game. In general, the look at workings of the game could stand some serious improvements.

Conclusion - Unique Form of Solitaire That Gets Old Quickly

Ancient Tripeaks is a unique deviation from the traditional solitaire game. The strategy of the game is a lot of fun, but the poor quality graphics, repetitive gameplay and identical modes of play make it a weak contender among card games. There are much better card games out there, including different Tripeaks games. People who don't care about the look of the game might enjoy it, but those looking for a great overall experience will find that Ancient Tripeaks leaves a lot to be desired. 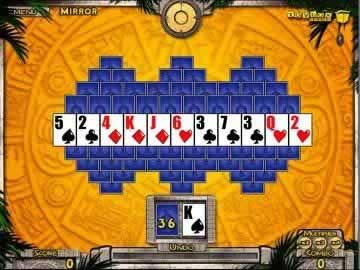 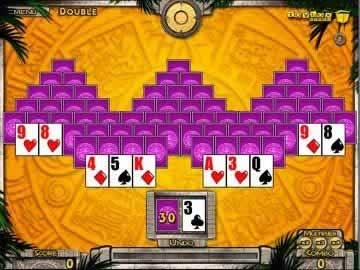