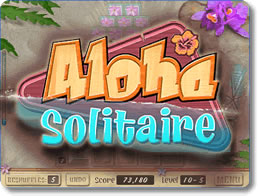 A soothing mix of Solitaire & Mahjong with a Hawaiian beach flair. Fun and relaxing!

You may love to play card games because they are a great way to relax and escape the stresses of life. The designers of Aloha Solitaire have put together a game that does just that!

Escape to the beaches of Hawaii and enjoy a game that is a fun blend of mahjong and traditional solitaire. Match cards to uncover the face down cards. When you get stuck, use cards from the pile to help make matches. Clear the entire board and you win!

With Aloha Solitaire, you get a blend of 2 all time favorite games wrapped in a Hawaiian theme designed to carry you away from the stress of life. The game is easy to learn with a challenge that increases with every level. The sound of crashing waves and the sound of birds will ease you through all 72 levels of solitaire fun. Great for any age of card game player!

Aloha Solitaire is a great Hawaiian themed card game that is almost like a blend between solitaire and mahjong. With great graphics, a relaxing Hawaiian theme, and ability to alter the difficulty level, Aloha Solitaire is a lot of fun and a great play for anyone. There are 12 locations with 6 levels per location, meaning a grand total of 72 fun card-matching levels for your enjoyment. Aloha Solitaire will suck you in, get you addicted, and keep you playing for hours.

Made For Those Who Want to Keep It Simple

Gameplay in Aloha Solitaire is relatively simple. There is a game board filled with face down cards. Some cards on the top are face up, so you can see their values. You must match the values of the cards (regardless of suit) to clear them from the board. If you get stuck there is a pile of face down cards that you are able to flip over, initially two at a time.

As your progress in the game you are eventually able to flip over 4 cards from the pile. Unfortunately, you will have to be very careful about how you utilize these cards, because you have a limited number of cycles through them. There are two difficulty levels in Aloha Solitaire. Normal requires that you only clear all the cards from the game board, while Hard requires you to clear all of the cards from the game board as well as the reserve pile. This can be incredibly difficult to do, so it provides a constant challenge. Each level has a different layout, and the card backs change regularly as you play, so each level feels unique, which helps combat the repetitive nature of the game.

Occasionally, you will be unable to clear any more cards from the board and will have cycled through all your reserve cards. There is then the option of reshuffling the cards in both the reserve and game board, but these are also limited. Neither the reshuffles or the cycles through the reserves regenerate each level, so you will have to use them sparingly and find powerups to replenish them. This makes the game relatively difficult, even on the Normal setting.

Challenge Level With No Reserve Pile

Additionally, the last level of each location is a Challenge Level, which arranges all the playable cards on the game board. You do not have a reserve pile, so you have to use great skill and strategy in order to clear all the cards and pass the level. This adds a great bit of additional difficulty.

Unfortunately, the game is a deficient in a few areas. There is no tutorial, so new players will have to figure out the intricate details by themselves. This is annoying, especially when you have no idea why the reserve cards won't flip back to the beginning or the reshuffle feature doesn't reset.

No Music But Good Sound Effects

There is also no music, which is a little disappointing, for a game that is so well done in other areas. There are great ocean and wildlife sound effects, so adding music would not have been such a difficult task.

No Storyline or Goals

There is also no storyline or overarching goal to tie everything together, so playing sometimes can feel kind of pointless. It would have made the game infinitely better if there was some sort of end goal.

Another minor but annoying drawback to the game is the Options menu. For reasons unknown, the options menu moves with your mouse, making it very difficult to change the options. If you move your mouse to the right side of the menu to turn down the sound effects, the menu moves with it. This is highly irritating, because you have to spend way too much time trying to get around the menu just to change the volume or whether or not it is full screen.

Aloha Solitaire is a fairly good card matching game with a great Hawaiian theme. It has two difficulty settings and various challenges, making it a fun game for all skill levels. With a little more effort put into a storyline, the music, and the way the mouse interacts with the menu, this would be a great game. With the flaws it does have though, Aloha Solitaire is sadly lacking in some key areas that limit its attraction and replayability. Give this game a try, but don't expect a game that has smoothed out all the details of being a great game. 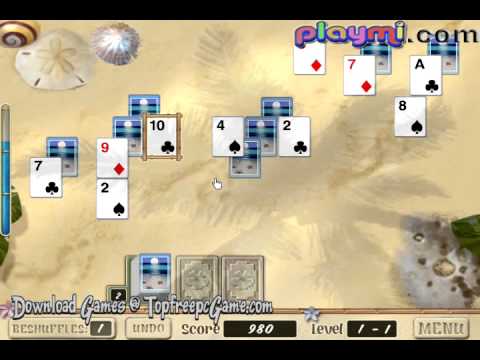 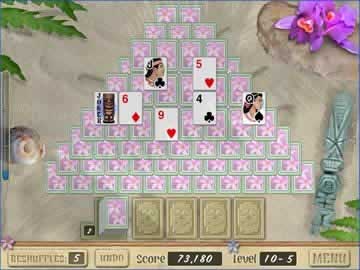 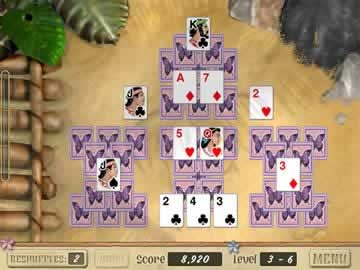