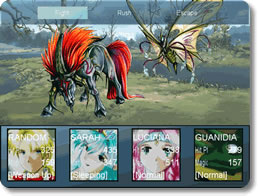 An Evil God Seeks the Power of Three Youths

If brought together, three young adventurers will have a great power, but an evil god wishes to have that power for himself! Unable to enter the mortal world, the god sets a trap for the trio. Will they be brave and skillful enough to escape the dark plans of the god and finally confront him?

Help the trio achieve their destiny in this standalone prequel to the Laxius game series. Enjoy 50 quests, 10 interesting characters that must learn to get along and many hours of classic role-playing game fun!

You get to choose what difficulty level to play on and how often you want to encounter battles. Gameplay follows that of classic role-playing games. Earn money by completing quests like delivering packages and earn experience to increase character stats by winning battles.

Gather more members to your party and use each character's unique skill, such as Random's healing skill, to win battles. Find or buy dangerous weapons, protective armor and items to cure certain wounds or poisons. Do you have what it takes to lead your party to victory and escape the evil god's trap?

Enter an Enchanting Fantasy World that You Won't Want to Leave

With tons of side quests, treasure chests and an expansive world to experience, this game will entertain you for many hours. The amusing characters and interesting story will entrance you and you won't want to leave the beautiful fantasy world this game creates. Enjoy the fun of countless battles and create the best characters to challenge a dangerous god.

Embark on an epic adventure to survive the god's wrath now with 3 Stars of Destiny!

Take On a Powerful God

In 3 Stars of Destiny, an evil god has set his eyes on a mysterious power held by a trio of youths and has set a trap to capture them and claim the power for his own. You'll need to form a strong party and hone your skills to foil his plan in this thrilling role-playing game (RPG) and prequel to the Laxius series.

You'll explore a vast world of forest, caves, villages, and more. You'll have a variety of quests to take on and enemies to battle against. You can adjust the difficulty of the game to find the challenge that you want, and also adjust how often you'll come across enemies to battle. A helpful tutorial and simple controls make this a game that's easy for anyone to learn and play.

Tutorial Gets You Into the Action Fast

You start off in 3 Stars of Destiny with an introduction to the story and tutorial, and then jump right into the action. The story plays a central role in the game from the start and drives your exploration. You travel throughout towns and forests as you progress through the game. You can find various items, secret rooms, and boxes of treasure hidden around the world. These items can be new armor or weapons, food that restores health or cures things like poison, or items that are only useful to sell (like eggs). You'll need to collect items and earn gold to purchase better weapons, armor, and skills. You'll also need to keep a healthy amount of gold so that you can rest your party at inns.

As you explore, you'll randomly encounter enemies and a battle will begin. Combat is turn-based (like in many other RPGs), and you have several options on how to battle. You can use the basic attack, defend yourself, use skills that can restore health or deal damage, and use items that can do the same.

A lot of strategy can come into play when deciding which attacks, skills, and items to use and which target to use them on. As you progress in the game, you'll quickly gain new allies that will join you in exploration and battle. It won't be long before you're taking on a large group of fierce enemies with your own group of heroes. You'll be able to collect and purchase stronger armor and weapons, as well as learn more powerful skills.

One of the better features of the game is the ability to choose a difficulty before starting. You can choose an easy experience where enemies are weaker and you are stronger, or a tough and challenging experience with difficult enemies. The difficulty level also affects the number of save spots scattered throughout the game. On top of that, you can adjust the frequency at which you encounter enemies in the wild. It makes the game more attractive to a larger group of players, and lets you experience the gameplay and story even if you aren't the best or most experienced RPG player.

The one downside is that even on the normal setting for encounter frequency, the rate at which you get pulled into battles is still fairly high. Fighting enemies several times in one area can get annoying when the mobs aren't a threat, and can be dangerous if they are.

The graphics in the game are fairly simple and 2D. However, it doesn't really hurt the game or detract from the gameplay at all. The graphics are also similar to those of many other RPGs (such as Laxius or Aveyond). Similarly, combat animations are fairly limited and not all that exciting, but it's not a huge issue. The sound effects and music are both great additions to the game that add to the atmosphere and help draw you into the game.

3 Stars of Destiny is an addictive and entertaining RPG that's excellent for any fan of games like Laxius and Averyond, as well as anyone else. Humorous dialogues help tell an interesting story that drives the gameplay and exploration. You'll explore a vast world of forest, caves, villages, and more.

You'll have a variety of quests to take on and enemies to battle against. You can adjust the difficulty of the game to find the challenge that you want, and also adjust how often you'll come across enemies to battle. A helpful tutorial and simple controls make this a game that's easy for anyone to learn and play. Don't hesitate to give this game a try. 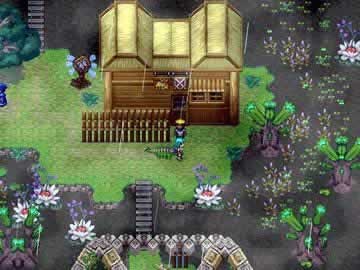 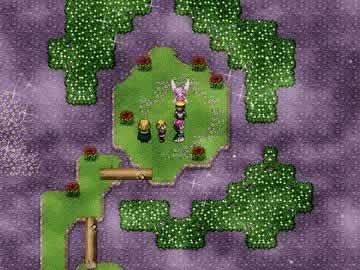