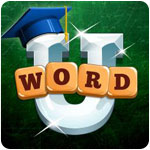 Back to School! Do you think you're a hotshot when it comes to vocabulary? Do you think that just because you learned a bunch of words a long time ago, you mastered the English language? You mastered nothing, bucko. If anything, you need to start taking some refresher courses, which is why you're about to be enrolled in Word U, the world's first university devoted entirely to the art of spelling.

The Spelling's the ThingThere are tons of words to spell here at Word U, but only so many letters to spell them with. Can you find the words hidden within the jumbles?

Earn Your Word Degree Today!Spelling might be one of the earliest skills we pick up on in our lives, but it's something even the best of us trip over from time to time. If you don't want that to happen to you, then enroll in Word U today. It'll challenge you, it'll make you think, and it just might help you brush up on the old lexicon.

A Game of Words

You think you know the language you speak. Then one day, you make a critical error and leave people wondering if you have the hairy feet of a bear under your shoes. Words just have a way of sneakily tripping you up like that, which makes the act of forming and spelling them out a game in and of itself. That's where we come in with Word U, an app that takes the simple act of spelling, and proceeds to utterly break your puny little mind with it.

What's the Word Around Word U?

Word U is simple, and if you've ever played Scrabble, it should be immediately familiar. Every level provides you with a random assortment of letters, and it's your job to use them to spell out all the words needed to pass. Some of these words use all the letters you have, and others only use some of them, but in either case, all you have to go on are the empty spaces signifying how many of each type you need.

It's pretty basic stuff, but the game gets a lot of mileage out of the simple formula. Finding every word from the jumble is amazingly addictive, and it never ceases to bring a smile to your face when you realize how switching a few letters around can spell out a whole new word. On the flipside, it can end up rather humbling to find yourself stuck staring at the same jumble for five minutes wondering what other words you could possibly make with these confounded characters, only to realize just flipping them backwards will spell out the most obvious thing imaginable.

That's how the normal game works anyway. Every now and then, you're treated to a bonus level which changes things up. Whereas regular levels give you all the time you need to find every valid word, bonus levels are more rapid fire affairs that challenge you to spell any word you can think of from the available letters. They start out easy enough with three-letter words, but things ramp up as you soon get asked to make four, five and even six-letter words. Bonus rounds don't pop up as often as they likely should, but when they do, they spice things up very nicely.

A New Way to Spell

It's especially fun in how you go about actually spelling everything. The app could have gone the simple route and make everything a button to press, but that was way too mundane. Word U instead has you string letters together by tracing over them with your finger. It's not a big deal in the grand scheme of thing, but it does add a sense of dynamism to the product.

Stuffy as an Old Dean

However, while the controls make Word U feel dynamic, actual progression in the game is very rigid. Every jumble you get could spell out as many as a dozen or so words, but the game will only let you proceed if you spell a set of very specific ones. This is despite the fact that it boasts a very extensive database of words that even includes a lot of slang terms.

To Word U's credit, you do get rewarded for every proper word you make. The term you spell my not get you any closer to beating the level, but it will net you some extra coins that can be used to buy hints. It's nice, but it's no less frustrating when a perfectly good word is otherwise rejected like that.

Other Touches, Big and Small

Other than that, there's not really a whole lot of bad to be said about Word U. Its presentation could likely use a bit of work, if only to make it more enjoyable to look at. Granted, there's only so much you can do to make a game about spelling look good, and the college theme the app is going for doesn't lend itself well to interesting visuals anyway, but it's still a drag to look at the same campus backdrop every level. The game is divided into various sections that are named after real life universities, and it would have been a neat touch to base the visuals off them. That's neither here nor there; it's a small issue that doesn't affect things too much.

A much cooler detail is the onboard dictionary Word U comes equipped with. This thing is very detailed, and will run through every possible definition for every word in the app's database, from the nouns to the verbs. It's seldom necessary, but it's a nice touch, and can certainly help in expanding your vocabulary when you come across a word you're not familiar with.

Conclusion: The Word is Great

While Word U can be stubborn at times, it's overall a very good app, and probably one of the best mobile spelling games you can get. It's simple, but wildly addictive, and is the perfect thing to have around whenever you have a few otherwise boring minutes to kill. 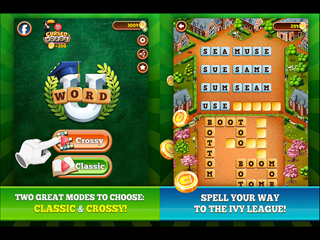 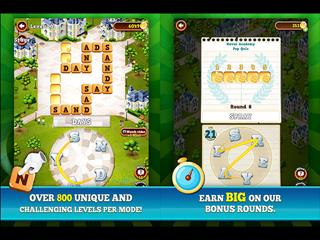