Trump on the Run Review 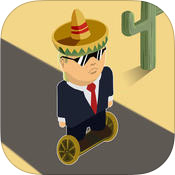 Help Trump Escape from Mexico Before It's Too Late!

Terrible, there is not much good about this game.

Uh-oh! Donald Trump's in big trouble now. Somehow, he's found himself neck-deep in the bowels of Mexico. After all the unsavory things he's said about his nation's neighbors to the south, it's only a matter of time before one of the locals recognizes him and helps themselves to a few of his internal organs. Our hero better start running, and he'd better start running fast. Will Trump get out of the country in one piece? Will he make it back across the border before the polls close? Will he ever make America great again? His fate is in your hands!

Mexico is a vast country, and the desert is unbelievably sweltering. It's going to take a lot of guts, energy and speed to reach the Rio Grande. Fortunately, if Trump has the gumption, then as long as he keeps on running north, he just might live to see Election Day.Who knows? He may even become president!

Go the Distance with Trump

No matter what your opinion on the Trumpster may be, Trump on the Run has something for everyone to enjoy. Combining political satire with laugh-out-loud comedy and challenging endless runner action, you have a non-stop thrill ride that never lets up. Whether you want a chance to control your favorite 2016 presidential candidate, or just want to see the guy you're most definitely not voting for suffer a tiny little bit, you have everything to gain when you download and play Trump on the Run.

Trump on the Run Review

An Odd Choice for an Endless Runner

Whether you love or hate politicians, you can't deny that they're an endless source for mockery. Such is the case for Trump on the Run, which serves to give Donald Trump a thrashing in the form of an endless runner. At least, that's what we can assume the app's idea is supposed to be. Making Trump the subject for any kind of game, let alone an endless runner, is bizarre no matter how you look at it.

However, you're not here to read a piece contemplating the latent symbolism of an American businessman running through the Mexican desert while also trying to run for the Presidency at the same time. You're merely here to see if this absurd idea for a game actually works. The answer is that it might have had a chance to if it had been made by more capable hands. Unfortunately, capable hands did not make this. Fast-working hands looking to make a quick buck did, and you'll realize that within seconds of opening the app.

The lack of effort put into the app can be seen just from the graphics alone. While it's wrong to judge a game solely on its visuals, we still expect some level of competence to be put into a professionally-made product, which Trump on the Run clearly does not have.

For starters, the graphics are cheap. Trump's sprite, which had the potential to be kind of endearing, has a grand total of two animation frames to represent his running. That's it. No other frames for him were created for the simple act of running, nor were any animation cycles for jumping, leaping, stumbling, tripping and falling produced. No matter what he's doing, Trump's just cycling through the same two frames of animation. If he bumps into anything, he merely disappears and the screen flashes.

Worse, the artists did not even bother to make his sprite properly overlap with the many obstacles you'll undoubtedly crash into. Donny Boy is in front of things when the perspective implies he should be behind them, which just makes Trump on the Run look like an unfinished school project. Add an unimaginative desert background that serves as the game's only setting, and a grand total of two boring obstacles to avoid, and you have a very amateurish piece of work to deal with.

The game doesn't play much better either. While it operates from an isometric point of view, it still plays like a basic endless runner. Donny Boy runs automatically, but requires your input to jump. Unfortunately, the controls are not very responsive, the character's jump is awkward, and the obstacles have wonky hit boxes that make it excessively difficult to tell how far you have to be to safely jump over them. A double jump can sometimes provide a life-saving boost, but it won't help in all cases, particularly those where obstacles are bunched dangerously close together, which is annoyingly common. Needless to say, you're going to spend most of your time in Trump on the Run crashing into things.

It doesn't help that the app just doesn't have much else going for it. The path Trump runs on remains a straight line, there is no lane-switching mechanic, and power-ups are completely absent. The only thing you'll ever do in this app is tap the screen to jump over everything. The pace is fast, though one could say that it's too fast. With how often you have to jam your finger into the screen without rest just to get by, Trump on the Run swiftly becomes a very exhausting game to play.

There are upgrades to be found, which you can obtain by collecting tacos while you run. Unfortunately, the cheapest thing to buy costs a whopping 1000 tacos, which is really not worth the hassle. You'll very likely delete the app long before you hit the halfway mark.

Must Keep that Ad Revenue Flowing

However, the final and perhaps biggest slap in the face that Trump on the Run delivers is how nakedly obvious it is about being a source for ad revenue. It is not enough that there's usually some advertisement glued to the bottom of the screen. It's also not enough that one of the menu items leads to the download page to some other app. Even with those in place, the developers still saw fit to frequently interrupt your playtime with even more advertisements, both in the form of movies and splash pages. These come up after every two or three games, and they are often fairly lengthy as well. With how easy it is to die, you could very well spend more time looking at advertisements rather than just playing the stupid app.

If there is a saving grace, it's that the games Trump on the Run advertises are most definitely better than it in every way. Sometimes, it's possible to be brought to an interactive ad that ends up being a minigame in and of itself. Chances are you'll have a lot more fun with those than with Trump on the Run.

Trump on the Run is very clearly a rush job made to capitalize on the silliness of its concept and the Trumpster's prominence in the media to generate as much ad revenue as possible. Little to no effort was put into its presentation and design, there's really nothing fun about it, and there's really no reason for it to exist. There are plenty of endless runners packing the app stores, and just about all of them are more worthy of your time than this travesty. Just skip Trump on the Run. 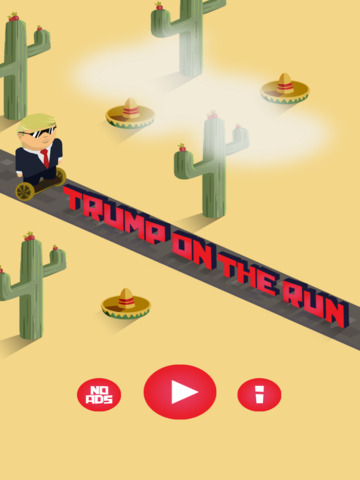 Rate: Trump on the Run