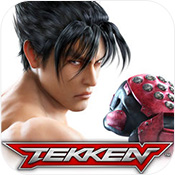 Unleash a Flurry of Stylish Kicks and Punches with Tekken's Best Fighters!

The year was 1994 when a new game hit the arcades and took the world by storm. Called Tekken, it revolutionized the fighting game genre with its then state-of-the-art visuals and three-dimensional arenas that changed the way people could brutalize each other. It kick-started a franchise, spawned over a dozen sequels and spin-offs on just about every gaming platform to come out since, grew bigger, got better, and has finally come to a mobile phone near you. Better tighten your headband and stretch out your muscles, because the kid gloves are coming off.

You want bone-breaking, face-smashing, butt-kicking action? You've come to the right place. All the intense brawling you've grown to love from Tekken is here, and you can experience it all in the palm of your hand!

A Champion in the Ring


If you're a longtime Tekken fan who's always on the move, then this mobile edition of the classic fighter is a dream come true. On the other hand, if you're a newcomer who's just itching for a fight, then you've still come to the right place. Tekken is the app for aspiring brawlers of all stripes, so get it and get in the ring today!

Tekken On the Go

There are some games that work well for mobile gaming, and there are some games that simply don't. Fighting games are among some of the most notorious in the latter category. The elaborate combination attacks, the careful timing needed to succeed, the sheer number of buttons to memorize, none of that translates well to a handheld device operated by touchscreen prompts. That's not to say it's not impossible; it's just very difficult, which Namco-Bandai's mobile edition of Tekken proves. Based on the long-running series of 3D fighting games, Tekken takes what works about the genre and the franchise in general, and attempt to adapt it to a mobile platform. For the most part, it succeeds, but` not without some compromises.

Tournament in the Pocket

The most notable of these compromises is also the most understandable: the controls. Fighting games are known for having some of the most complicated control schemes out there. Each character typically has over a dozen or so unique moves. Each move requires a combination of buttons to be pressed in swift order, and the key to mastering these games rests in the player's ability to memorize these combinations and learn how to string them together in a way that will reduce the opposition to a puddle of goo in no time flat. To put it simply, they require more button presses than just about anything else out there.

The mobile version of Tekken simplifies things considerably on that front. You tap the right side of the screen to attack, you hold the right side to charge up a more powerful maneuver that can potentially break through guards, you tap the left side to block, and you move simply by swiping your finger in the direction you want to go. There are no combos to execute this way; there are only flurries of kicks and punches to unleash while you do what you can to mitigate the damage you sustain.

If you do want to execute flashier moves, you do so via Waza Cards. Waza Cards let you pull off attacks that are more powerful than just your basic blows, but you can only use them once, and you only get three per round from a total "deck" of nine that you put together ahead of time.

Experienced fighting game fans might turn their noses up at it, but the system works. The simplicity allows you to focus on the fight at hand, and it's easy for novice fighters to pick up and play. Pounding a big panda bear into submission feels just as satisfying on the small screen as it does on the high-definition one, and knowing that there's always another challenging foe to fight makes this a hard game to put down.

It helps that the app looks nothing short of fantastic. The graphics are incredibly detailed, almost on par with what consoles are capable of pulling off. Every classic Tekken character looks as familiar and bombastic as always, and the blows they inflict on one another look like they seriously hurt. Just seeing Tekken in action can be considered a game in and of itself, and the developers deserve kudos for capturing the series' spirit on a screen so small.

Trouble in the Ranks

Sadly, not all compromises are made equal. Traditional fighting games live and die by their characters; each one has a distinct look, personality and play style that make them appealing to different players. Some people may like to play as Lili, while others would prefer to play as Bob. Unfortunately, Tekken Mobile can't be bothered to just let people play who they want; it gives you a couple of predetermined characters to start off with, and expects you to unlock the rest. You don't have a lot of choice in how you unlock the rest either; everything in this app is earned through random loot boxes, and characters are no exception.

Speaking of which, it can't be ignored that the app's current lineup feels awfully limited. Tekken has a colorful cast of characters, and yet this mobile edition is missing a lot of them, including Heihachi, the series' most prominent and recurring antagonist. While it might be unrealistic to expect everyone to make the cut, the developers made the confusing decision to turn this app into the official debut for a bunch of completely new characters on top of that. It doesn't hurt the quality of the game at all, but seeing these new guys chilling in your Tekken game when your favorite fighter is nowhere to be seen can feel like salt in the wound.

Overall, Tekken Mobile is still a pretty solid app all around. It does the best job it can to bring the fighting game genre to tablets and smartphones, it looks great, and it plays pretty well all things considered. It's no substitute for what you can find on a console, it's missing some characters that would have been nice to have, and your inability to really pick and choose from the roster is irritating, but if you can get by that, you'll find an app worth checking out. 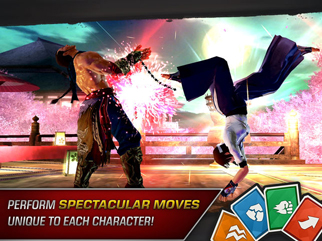 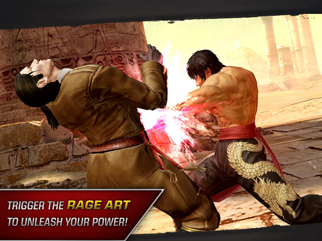