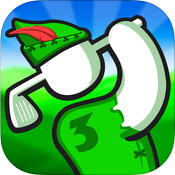 Super Stickman Golf 3 is an all-around great follow up

Super Stickman Golf 3 is a sort of update but really more of a level pack for the popular mobile series. You get 20 more courses, lots of playable golfers, and a big ol' pile of unlockable hats to play with. More than enough to have fun with!

When in Doubt, Accessorize!

There are a whole lot of cosmetic options and unockables to be had, and several of them even change the game slightly.

The individual courses and holes are what make Super Stickman Golf so tricky. If you want to finish under par, you're going to need to play smart.

New and old players alike are bound to have fun with Super Stickman Golf 3's absurd golf courses and power-ups. That, coupled with all the unlockable golfers and hats, will likely keep them entertained for quite some time, too.

Getting more of the same could be problematic, but the core wacky golf gameplay is solid enough to carry it through. Playing more or less the same game but with a new set of 20 levels is plenty, to be honest. Of course, being Super Stickman Golf, there's more to it that simply hitting a ball into a hole.

More of the Same Can Be Better

As before, there are quite a few things to unlock in Super Stickman Golf 3. For one thing, you can play as one of over 30 different golfers for a bit of cosmetic customization. You can also acquire different trails that will follow the golfball once it's hit, for an added bit of flair. Then there are the 'powers,' which will grant the ball all sorts of different properties and potentially get you out of a rough spot. Finally there are the hats, which also add to the visual goofiness but also provide unique abilities. I'm particularly fond of the Red Mushroom, which is both an homage to a popular platforming fungus-person and a great way to line up your shots more accurately.

Of course the courses themselves are as impressive and illogical as ever. Somewhat believable fairways soon make way for floating islands, frozen hazards, gooey surfaces, and a whole lot more. The ridiculous levels have always been one of the biggest draws of the series, and it's certainly no different here. This does mean it's a lot easier to drop the ball into a hazard and receive a penalty, but that challenge is half the fun. Plus you can power-up your ball to freeze water on contact, stick to walls, and more, so it's not exactly unfair.

Weak on the short game

The same control scheme from the original is also present and accounted for. It also works as well as it has throughout the series, hence the lack of any significant changes. Well, okay, there's been one addition: the ability to add spin to the ball.

Adding spin is as simple as dragging a finger around the bottom-right corner of the screen and adds the tiniest bit more control to where your ball ends up. It's super easy to use and can be a big help when it comes to staying in bounds or making it into risky shortcuts.

What's not so great, and is something I've had a difficult time getting used to, is the rather large discrepancy between putting shot strength and driving shot strength. Going from the former to the latter, because you'll likely spend a lot more time everywhere else but on the green, is pretty jarring. It's easy to get used to the sensitivity of driving, but putting feels almost sluggish by comparison. Putting at half strength simply doesn't yield the expected results, which can be kind of annoying when you've been doing well on a hole just to mess up during the short game.

Aside from the added spin control and the title, there's really isn't much to differentiate Super Stickman Golf 3 from the rest of the series at a glance, and that's okay! It's every bit as fun and wacky as the other two games, with a bunch of new courses and one small but still kind of significant control tweak. Whether you've never played either of the other games before or have 100% completion on both of them, it's definitely worth a look. 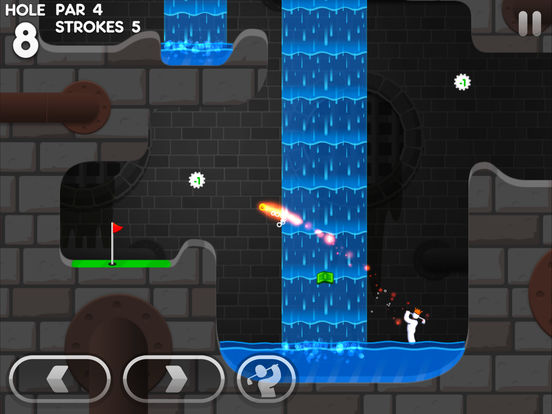 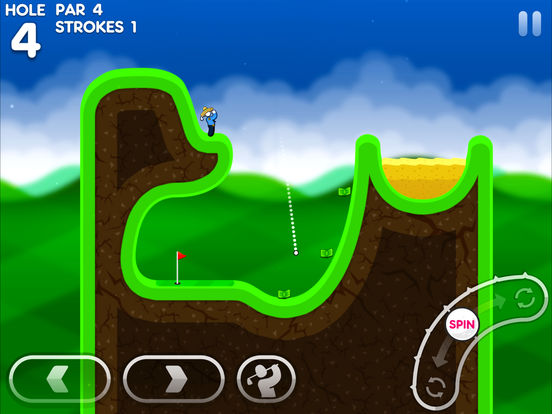