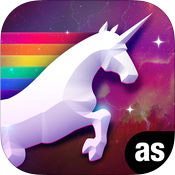 And here we have the final chapter of the Robot Unicorn trilogy with Robot Unicorn Attack 3 (Note: this may not actually be a trilogy but just roll with it). Are you prepared to crush those who would stand in your way in the name of rainbows and sugar-coated dreams? Then let's continue.

There are a fair few things for you to do between all the moments of robot unicorn running. If you're interested, anyway.

If you've had your fill of Robot Unicorn Attack, or really love the second game as most seem to, then you probably won't have much need to check out Robot Unicorn Attack 3. If you're new to the series or just can't get enough, however, you'll probably have a good time with it.

Lollipops and Rainbows and DEATH

So hey, Robot Unicorn Attack 3. I feel like most mobile gamers are probably familiar with the name, and if not it sort of explains itself. For the most part. It's basically an endless runner (i.e. the character runs non-stop in one direction and you have to control their jumping and whatnot to avoid obstacles) featuring, what else, robot unicorns. Robot unicorns that smash through crystal star barriers and mercilessly destroy their enemies, but also explode on impact with just about anything.

In a basic sense, Robot Unicorn Attack 3 is the same game as the first two. You tap the left side of the screen to jump, tap again in mid-air to double jump, and tap the right side of the screen to charge forward in order to smash through obstacles and enemies. You have to dash your way through endless worlds while trying to last as long as possible. Unicorns. Robot unicorns.

There's a bit of a difference in the minutiae, though. The graphics have been improved, naturally. It seems as though this can drastically affect performance on older devices but it looks pretty great on what I've been using. There's a surprising amount of detail in the 3D backgrounds of the various worlds, and my goodness are there a lot of visually distinct horned horses to find! My current favorite is a common (i.e. not rare) one named Chop Shop. I just love the steam punk-y look with all the gaps and rusty gears.

I also like some of the other additions like the Citadel and unicorn levels. Granted the Citadel is just a stand-in for your player account gaining levels that open up more storage space, unlock the occasional new feature, and grant a small boost of in-game currency, but I still like that it's there - and I like the image of a massive and slightly terrifying unicorn head with a launching pad for a tongue poking up out of the clouds. Then there are those unicorn levels I mentioned, which will increase for each individual steed as you run with them. Every so often this could increase a given unicorn's score multiplier, but aside from the vaguely utilitarian function it goes a long way towards making it feel like you're always accomplishing something.

In fact, a lot of Robot Unicorn Attack 3 seems to focus on making it seem like you're getting stuff done. Leveling-up unicorns is probably the most obvious, but there's also saving up currency you earn from playing that can be used to buy random draws for more unicorns; or using duplicate unicorns to power-up others; or completing tasks to increase the Citadel's level; or sending unicorns that don't fit on your team of three off on raids to earn some extra goodies. All on top of the actual endless running gameplay, of course.

One thing bugs me a lot more than I'd have expected, though. You can't start running from the Citadel menu. Instead you have to back out to the main menu and hit Play from there. I have no idea why this is a thing as it seems counter-intuitive, and while it's not a huge deal to have to return to the main menu to play it is rather annoying. Seems like a really odd oversight.

Then there's the 'problem' of Robot Unicorn Attack 3 more or less just being more Robot Unicorn Attack. There's a lot of fondness for the first two games, understandably, but while this one is plenty fun in its own right I'm not sure that it's going to be enough to trade up. An awful lot of people really like them some RUA 2, and many of them seem content to stick with that one instead of spending much time with the newest iteration. But hey, if you're new to the series it's as good a place to start as any.

Speaking as someone who hasn't been absorbed in an attack carried out by robotic horses with horns for quite some time, I think Robot Unicorn Attack 3 is plenty of fun. It looks good, the visual variety of the different unicorns is neat, it plays well, and there's always a steady sense of progression (even if it is artificial). I can deal with the mild annoyance of having to back out to the main menu between managing my stable and actually playing the game, and the lack of any truly significant strides taken from the second game doesn't bother me. It could very well be a turn-off for others, though. 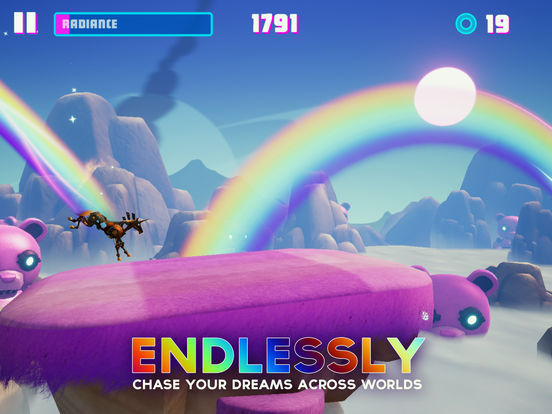