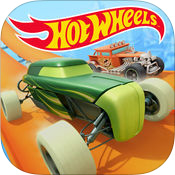 Hot Wheels: Race Off is fun but familiar

Hot Wheels: Race Off is a Trials-style game of driving in one direction on a physically impossible track while trying not to wipe out. It's simple to get into, tough to actually play well, and aside from a handful of annoyances it's pretty fun. So long as you don't run out of gas, anyway.

Simply reaching the finish line can be a challenge in itself - let alone getting there in the fastest time.

I couldn't really call Hot Wheels: Race Off 'special' or 'unique', but it does what it does well enough. If you're more interested in cars over motorcycles, prefer colorful and cartoony visuals over gritty realistic ones, or just have some time to kill and like physics and racing, you might want to give it a look.

Trials By Fire (Not Really)

I've played a few games like Hot Wheels: Race Off before. Not that this is a bad thing, but it's certainly not a new thing, either. Still, for what it is it's pretty fun - barring a few hiccups here and there.

The somewhat toyetic style of Race Off's visuals is a good touch to be sure, but it also looks pretty good in a general sense. The cars are just a bit shiny, the smoke that come off tires as they screech against the track billows nicely, and as irritating as it can be to flip your car and explode I have to admit it's oddly satisfying to see all the little bits rain down all over everything. It's no Infinity Blade, but it does look nice.

Race Off is also one of those 'easy to play, difficult to master' type deals where it takes all of six and a half seconds to learn the controls and then much longer to perfect your techniques. In this case, the challenge comes more from trial-and-error track progression and some slightly wonky design choices. The first of which is the way cars will tilt as you hit the gas or the brake while in the air. Having the car tilt back via the accelerator and forward via the brake just feels backwards. I mean, it makes sense in a physics sort of way if you imagine that every single vehicle has rear-wheel drive, but I always end up trying to correct my midair spin the exact wrong way. Then I land upside down and explode.

Sometimes the physics get in the way, too. Hitting the track and just the wrong angle can have all sorts of unfortunate effects - from bouncing off of steep inclines and being forced to wait while the car rolls back and you can try again, to getting knocked for a literal loop before landing wrong and blowing up. This is where the trial-and-error stuff really comes into play and I wish it wasn't as pronounced. Constantly upgrading your cars to change their overall performance and handling doesn't help either, because it makes getting used to things even more tricky. On the plus side, at least there's no real penalty for failing. You simply keep any of the coins (for upgrading) you've earned during your run, then try again.

Gas can be a problem, however. You have a limited amount of fuel, which drains more when you accelerate or brake but still drops off even if you aren't doing anything. When you're empty your run is over, although there's usually at least one can of gas you can grab on each track. What annoys me is that the gas levels drop no matter what. Sure you can sort of ration fuel a tiny bit by letting up on the pedals during loops and whatnot, but I don't like when races end prematurely just because my car leaks like a siv.

Gripe as I may about the occasional physics hiccup or the fuel nonsense or the awkward tilt controls (shut up they're weird no YOU'RE being a baby about it), Hot Wheels: Race Off is actually a fair bit of fun. It's not really a replacement for, say, any of the Trials games if you've been playing those, but overall it's an inexpensive good time. 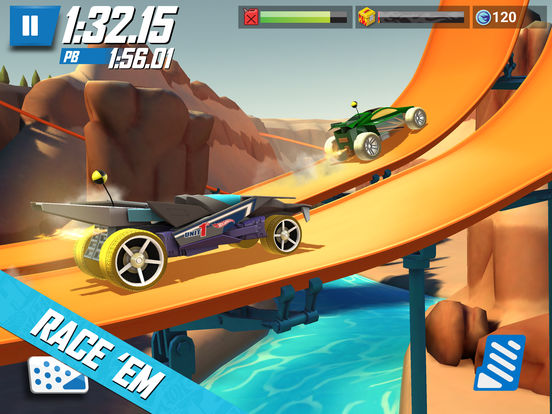 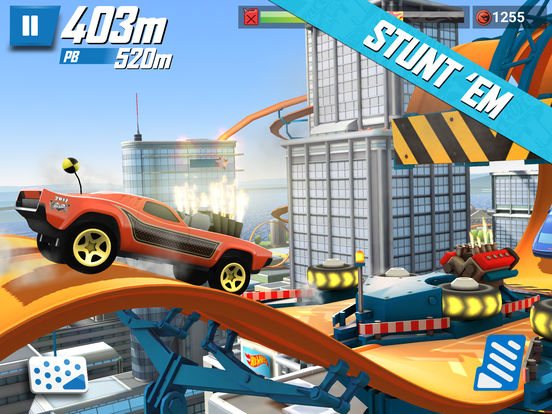