Play Ghostbusters World to Bust and Collect Ghosts in AR 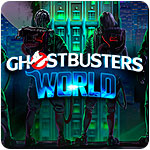 Ghosts are appearing everywhere, and the world is calling you for help. Using the latest Augmented Reality and Maps technology, find and bust ghosts in the real world!

Fire your proton beam and capture and collect ghosts from all dimensions of the Ghostbusters franchise.Use a variety of the latest in spectral neutralization and trapping technology.

Team up with nearby Ghostbusters to take down the Stay Puft Marshmallow Man and other powerful ghosts in multiplayer boss raids.

Dive in to an all new Ghostbusters story featuring your favorite classic characters.

Build a ghost team and enter PVP battles in the Ghost Dimension against those of other Ghostbusters all around the world.Deploy your ghost team to clear the ghosts infesting Gozer's Tower and the Daily Haunt to gain valuable resources needed to make your ghosts stronger!

Check-in at Dimensional Doors spread out throughout your neighborhood and the world at large! Ghosts enter our dimension more frequently at these intersections between their realm and ours. They'll also provide you with tools and materials that will help you bust ghosts.

Augmented Reality, But That's Not All

We're thankfully getting to the point where augmented reality mobile games are no longer described as Pokemon Go, but with [fill in a noun related to a famous IP here]. Yes, it's true that Ghostbusters World leans heavily into the fun of catching ghosts in AR, but that's not all it's about. Once you've caught a few ghosts, you can put them to work fighting for you too. Forming teams of four from the spirits you've trapped, Ghostbusters World also offers a strategy RPG experience, one that's just interesting enough on its own that even if if you somehow get tired of firing proton beams at apparitions, there might be enough to keep you coming back anyway.

The AR is Really Well Done

I have a confession to make: I sometimes turn the AR features off in other mobile games of this genre because they don't function smoothly, use up the battery too fast or some combination of the two. I can't see myself doing that with this game, though, simply because the implementation is excellent. Provided you can find a flat surface, which turns out to not be as hard as you think because the game defines that pretty broadly, the AR ghost encounters are lots of fun as it looks like you're really zapping them with a Particle Thrower. The combat is simple but still more involved than you might expect, as ghosts can fight back and only well-timed taps can counter them. Once you have them down about halfway on health, you can throw out a trap and use the beam to hold them in place until they are captured. You don't even have to worry about crossing the streams. There are boss battles that are a little more involved, and all of your gear can be upgraded and more ammo for your more powerful gizmos crafted. These involve timers that promise to be kind of tedious later on, but when you are just starting out, upgrades take minutes, not hours, and premium currency can be spent to speed up the process if needed. Still, the most satisfying part of any of the core activities is seeing a ghost to fight, battling it for a bit and then tossing the trap out there and feeling like it's really on the ground in front of you.

Familiar Faces to Tell the Story

Lest you think Ghostbusters World is simply cashing in on the IP, the Story Mode brings back characters you know and love from the original '80s movies. Peter, Ray, Egon, Winston and even Janine are all present and accounted for, which is a welcome touch. (Also, the very first ghost you bust is Slimer, who should need no introduction.) The actual narrative plays out as a series of comic book pages interspersed with battles and tasks given to you by the original Ghostbusters. When you tire of the regular grind, Story Mode offers some relief.

Ghosts for the Ghost Dimension

The Story Mode also provides an in-game explanation for the strategy RPG element, as Egon discovers a Ghost Dimension where the Ghostbusters can't venture but evil still needs to be fought. Who better to handle that job than the ghosts you've captured? Beats sitting around in a containment unit waiting for some bureaucrat to shut it down so you can be freed. Inside the Ghost Dimension, things play out much the same way you've probably experienced in other mobile games. Every ghost has a basic attack and one special attack or ability (heals, taunts, etc.) that can be activated with just the tap of a button. The specials have cooldown timers, so there is some actual strategy involved, but it's nothing you haven't seen before. And that's just fine. Ghostbusters World would be disappointing if this was all there was to it, but because of the AR offerings, this mode is really just the icing on the cake and not the main focus, giving you a reason to catch as many ghosts as you can, and the rewards tend to loop back to the other part of the game in a logical fashion.

Get Out and See the World ... If You Want

One thing that doesn't feel like a big focus of Ghostbusters World at launch is actually walking or traveling to see more. Plenty of ghosts will spawn right in your home if you want (and sorry if you don't), and while dimensional doors on the obligatory game map that is synced to your real life surroundings provide rewards if you visit them, there's no obvious benefit to travel. That's something that other AR games released recently haven't seen to nail either, but we have a feeling this one can fix that feeling with the right in-game events or ghosts that are exclusive to different environments.

Conclusion: Ain't Afraid of No Competition

It's obviously going to be an uphill battle to unseat the current king of AR mobile games, but Ghostbusters World fires on enough cylinders to think that it could settle in with a nice community of its own. The combo of well-executed AR and nostalgia, combined with the bonus of the strategy RPG element seem like a winning combination, one that could even stir up talk of a movie revival. What's that? There already was one? Then never mind, and just enjoy the game. 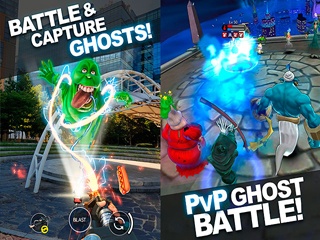 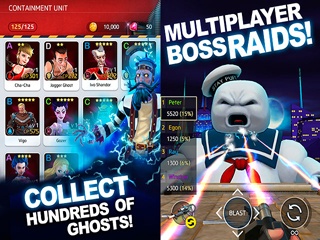