Lead a Mighty Empire to War and Glory! 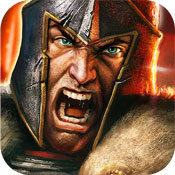 Are you getting tired of the glut of shooting games that overcrowd the market? Would you prefer to get out of the shoes of the common soldier, and take on the role of the commander instead, overseeing the battlefield and the empire in times of war and peace respectively? If so, then look no further than Game of War: Fire Age. As the leader of a civilization taking its first steps into a hostile world filled with monsters and magic, it will be up to you to turn it into the mightiest empire ever known.

It won't be easy; you'll need to become a master strategist, battle tactician, diplomat, and city planner all at the same time. More than that, you'll have to be ever vigilant. Danger lurks just over the horizon, and barbarians are ready to take what is rightfully yours. Some of them may even be your fellow players. Outwit, outfight and out-build every single one of them, and your name will ring across the ages forever.

Build From the Ground Up

A strong empire must be built upon a strong foundation. Keep that in mind as you design your capital city, which will serve as the cornerstone for what will hopefully be the dominant culture of the Fire Age.

You don't play an app called Game of War expecting everything to be all roses and sunshine. You're here to engage in bloody war games. Field a mighty army to conquer fertile territory, seize additional resources your people are in dire need of, and defend your borders from enemy forces looking to do the same to you.

• Train a variety of brave soldiers, including swordsmen, slingers, outriders, hoplites and archers.
• Build frightening siege engines of destruction like ballistae and battering rams.
• Train and outfit a mighty Hero who will lead your forces into battle through sheer force of will.
• Slay a variety of fearsome monsters that threaten your people, including Minotaurs, Hydras, Stone Golems and Rabid Rabbits.
• Forge alliances with your friends to earn more items and resources.
• Attack the territory of other players. Take it for yourself, pillage their treasures, slay their heroes, and prove your superiority in the field of battle!

With the Game of War app, you have the rare opportunity to create and customize a Greco-Roman civilization set in a mythic world. Will you lead your people to glory, or get stomped into ash? Download it now and find out. 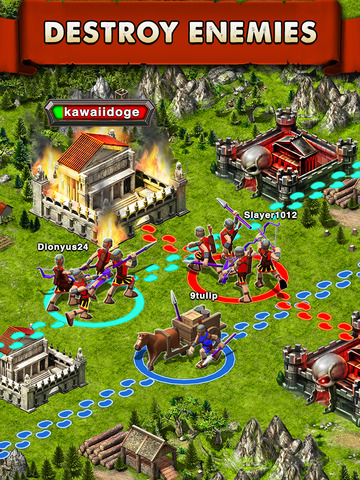 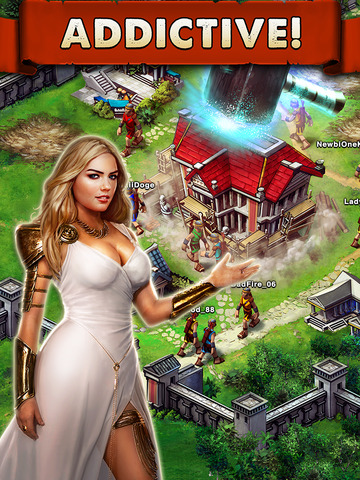