Live and Die by the Sword in this Dark Fantasy Action RPG! 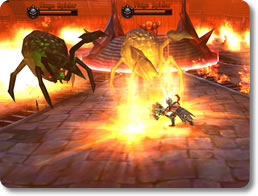 One hundred years ago, a terrible cataclysm struck the kingdom of Udar. Fearsome demons appeared across the land, killing, burning and maiming all they encountered. It was only through the heroic efforts of the Eternity Warriors that they were defeated and sent back to whence they came.

Unfortunately, Udar has not quite fully healed in the century that followed. The surviving demons have sequestered themselves within a number of foreboding towers that dot the land. Nobody knows what exactly they are planning; all they know is that it is only a matter of time before they come out and renew their campaign of terror.

Finish the Second Demon War before it begins! As a mighty warrior trained in the art of monster-slaying, you must set foot within the towers, brave their dark chambers, and kill everything within. Loot the treasures that they have been hording and use them to acquire higher-quality equipment to make killing the more powerful demons possible. Do whatever it takes. The demons will show you no mercy, so don’t even think about giving them any yourself.

Dive Into the Dungeons

Eternity Warriors 2 plunges you into the grim and violent world of the Demon Towers. It’s just going to be you, the armor on your back, and the steel at your side against an entire legion of ravenous beasts. If you give them even half a chance, they’ll rip you limb from limb. If you want to survive, then keep your wits about you and hold the biggest and sharpest sword that you can find.

The shadowy denizens of the Demon Towers are a mighty bunch, but they can be defeated in a myriad of ways. How you decide to go about releasing them from this mortal coil will be up to you.

There’s More Than One Way to Play

Eternity Warriors 2 is not lacking in ways to kick demon butt and take names. There are many games to play, many ways to kill, and many ways to improve your battle prowess.

Worth Playing for Eternity

Eternity Warriors 2 is one of the best-looking and most intense action RPGs available for iOS and Android systems everywhere. You will be astounded by how sharp the visuals will look and how much craziness can be displayed on a screen so small.

If you want to take a few moments or a few hours out of your busy schedule to crush some evil skulls in with a mace the size of a watermelon, then get this game for your smartphone or tablet computer right now. You could end up playing for a long time; possibly for eternity.

Hacking and Slashing On the Go

Diablo has been one of the best-selling franchises on the PC platform ever since it was first released in 1996, and for good reason too. Its gameplay was incredibly addictive, surprisingly deep, and yet still very simple and easy to grasp. It sounds like a perfect match for the touchscreen mobile market. That's where Eternity Warriors comes in. It might seem demeaning to call the games in this series 'Diablo Clones', but that really is what they are when you get down to it. Fortunately, 'clone' doesn't and shouldn't automatically mean 'bad'. Eternity Warriors 2 maintains much of the fun and addictiveness that its ancestor created, provided you can deal with some hurdles along the way.

It's All About the Fighting

The gameplay in Eternity Warriors 2 is very straightforward. You control a manly warrior in a grim fantasy world filled with monster-infested dungeons, and your job is to go into the dungeons and kill the monsters. There's apparently some story about monsters reappearing 100 years after the events of the first game, but it's completely nonexistent in the actual content of the app. There really is no context provided for why you're going around slaughtering monsters that, for all you know, are simply chilling in their homes. While games in general are not where you go to hear a good yarn, and mobile games are even less so, a little bit of effort in contextualizing the gameplay of Eternity Warriors 2 would have been appreciated.

That aside, the gameplay mostly works where it counts. The screen is often filled to the brim with enemies, but you've got the means to clear them out efficiently. Your attacks often consist of these wide, sweeping maneuvers that are ideal for hitting multiple targets at once, though how effective they are at that usually depends on the kind of weapon you're using. The dual axes you wield at the beginning are pretty good, but require you to be in the thick of danger, whereas something like a scythe will allow you to attack from range at the expense of being a little slower. Finding a weapon that works for you and using the right tool for the job plays a significant part of the fun.

Besides weapons, you also have a number of other techniques to help you along. There's a dash attack that lets you charge headlong into your foes and knock them around. You can opt to do a charged attack which is far more damaging than your usual flurries, but requires you to wind up a bit. You can also block attacks, with the ability to riposte if your timing is absolutely perfect. These actions typically expend a finite resource called Rage, which can usually be restored alongside health with a variety of potions. Unfortunately, that pretty much covers the range of actions you can do in Eternity Warriors 2; there really is no way to play a mage of any sort, let alone cast spells, so the app feels quite limited in scope. Fortunately, you can still get a lot of mileage out of these abilities and have a lot of fun in the process.

A Good Way to Lose Yourself in the Dungeon

It helps that Eternity Warriors 2 is a very good-looking game. Despite the app's low specs, it still manages to cram a lot of detail into the characters. The protagonist may not be the most original-looking guy out there, but you can still pick up on his facial features, the muscles on his torso, the dark hair he wears, and the red scarf he fancies. Better yet, every weapon and piece of armor he can use has a distinct appearance and is rendered onto his model when equipped, so dressing him up in new gear is pretty fun. The same goes for the enemies. There are a lot of ugly critters out there, and not only do they come in all sorts of shapes and sizes, but they also have unique attack patterns and animations. Skeletons, ogres, zombies, spiders and dragons all look and move how you would expect them to.

Aesthetically, the levels don't quite measure up to the characters. They get the job done at looking like your usual fantasy dungeons, but that's really all they do. Nothing about them is original or has much in terms of personality. Luckily, they're still pretty fun to explore. There are traps you have to watch out for, with spiked floors and heated pressure plates, as well as branching paths where you can uncover extra treasure chests to open, provided you're willing to fight a few more dangerous foes. Finally, the game loves to throw a lot of formidable sub-bosses at you. Overall, the levels strike a good balance between being small enough to be completed in a short length of time, but expansive enough to give you a chance to go off the beaten path every now and then.

Unfortunately, while the combat is fun in spite of its simplicity, it can also be really frustrating. This is in no small part due to the finicky controls. Movement is done by scrolling your finger around the left side of the screen. A lot of space is devoted to it, so you'll always be on the move when you want to be, but it's not very accurate; trying to face your enemy at the right angle can be a bother, which means you'll often find yourself wasting Rage or unable to block attacks because you just weren't able to turn around properly.

Worse than that are the combat maneuvers. While attacking normally is easy, doing anything else is more difficult than it has any right to be. That's because the buttons for dashing, charging and blocking are much smaller and in close proximity to the attack button. You can press down on them, but there's no guarantee your warrior will do what you tell him. This makes blocking and riposting in particular especially troublesome. It's not so bad if you're playing on a large screen, but smaller devices will have problems.

This is a free-to-play app, so some freemium issues are bound to surface. The good news is that Eternity Warriors 2 doesn't resort to the industry's shadier tactics, with content gated behind pay walls and energy meters. Unfortunately, the strategy Glu is utilizing has its own evils. All upgrades can be made by spending either soft currency that you loot in the dungeons, or hard currency that's bought via real money. The difference between the two is that the former can randomly fail to grant improvements, while the latter will always succeed. While Glu has to make money off this app somehow, it's still annoying when your hard work turns out to be all for nothing, and you have no choice but to cough up the dough or go back to grinding.

Eternity Warriors 2 is a decent app that really needs more polish. The character you play as could afford a few more abilities to work with, the controls need some serious fine-tuning, and perhaps there could be a few tweaks to the leveling system so it doesn't feel so random. However, if you can tough it out, you'll probably find a fun enough experience with this game, making it worth a brief look at least. 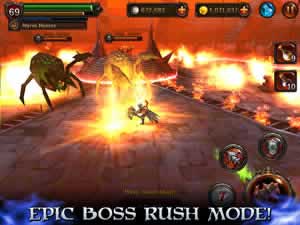 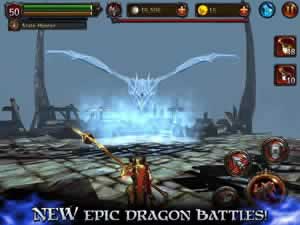