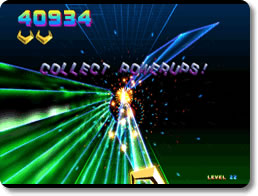 Over 100 dazzling and dizzying levels of action-packed fun!

Typhoon 2001 is a fantastic remake of the Atari Jaguar classic Tempest 2000, a much beloved arcade-style shoot 'em up.

Much like the original, Typhoon 2001 puts you in control of a claw-like ship on a 3D playing field, and the goal is to shoot every enemy coming your way. Don't let the enemy 'flippers' reach the top of your field, or you'll have to start the level over!

Featuring over 100 dazzling levels that feature beautiful graphics, a great soundtrack, and intense action that gradually gets more challenging - Typhoon 2001 is a remake that actually manages to improve upon the original in many ways. So, hitch up your PC and get blasting with this pulse-raising free game!

If you're a fan of Tempest or any arcade shooter then you need to give Typhoon 2001 a try. This remake of the classic game incorporates all the features of the previous game but adds in a host of new features. Increased color and sound add a futuristic feel to the game. With over 100 levels and a level editor to create your own, this game is an excellent addition to the Tempest series.

Typhoon 2001 is played similar to the way Tempest was played. Each level has a profile shape that enemies will move towards you on. The enemies are Flippers, as they move up they can move side to side by flipping over. Your goal is to shoot them before they reach the top where you are. The Flippers will also shoot at you. In Typhoon you must collect power-ups to progress through the level. Power-ups will also give you an upgraded weapon as well as the ability to jump. Jumping is useful when Flippers reach the top of the level. By jumping over them you still have the option to shoot them.

100 Levels Plus You Can Edit Them

There are 100 levels to play on. Each level increases in difficulty as you go. All levels are available to play and you can start from any level you choose. Every level can also be edited. You can rotate and move the existing map segments as well as adding your own. Even the color of the flashing lights can be adjusted. This allows you to customize the map to any shape you can imagine.

The graphics are very simple and nearly the same as the original Tempest game. The improvements come in the background and color additions. Lots of bright colors and swirling graphics add a light show effect to the game. If you don't like the colors they can all be turned off in the settings, but they do add a certain visual appeal to the game.

The controls in Typhoon 2001 are quite simple, but controlling your claw (the thing you shoot with) in the game can be difficult. The arrow keys are used for navigation, space bar is used to fire, enter shoots your super weapon, and tab makes you jump when you have the upgrade. The difficulty comes when you are navigating the levels. Landing on one specific segment can be difficult. Tapping the left key once can jump you multiple segments instead of just one.

Conclusion - A Nice Upgrade to Tempest

Typhoon 2001 adds a lot of great new features, like upgrades and new color and light shows, to a classic arcade game. The features that made this game a classic weren't neglected in making it either. Whether you played Tempest at the arcade or you just want a fun time shooting down the enemy, this game is a good way to go. Overcoming the control difficulty shouldn't be too much of a problem, so everyone can have a great time playing Typhoon 2001. 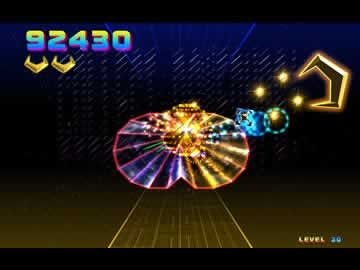 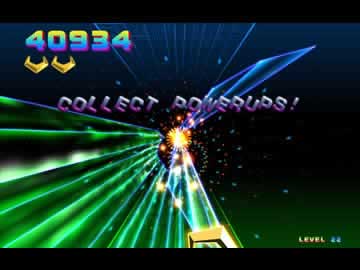