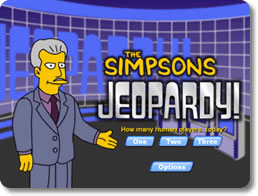 The Simpsons for 500, Alex! Put your Simpsons knowledge to the Jeopardy test!

If you would like to still play the game, we are happy to point you to the Simpsons Jeopardy Developer's Site.

How well do you know Springfield's favorite family? How about putting your knowledge to the test in Simpsons Jeopardy!

This game features a broad range of trivia questions about the Simpsons, for the casual viewer as well as the hardcore fan. You'll enjoy the familiar gameplay of the Jeopardy TV gameshow, and you'll be pitted against other characters from the Simpsons that will be trying to beat you to the buzzer!

Simpsons Jeopardy also allows you to add questions to the game for other players - which may even help you be a bit more attentive the next time you watch the Simpsons!

If you are not a die hard collector of Simpsons memorabilia, then you will have no need to download this game. Simpsons trivia for the PC is at best half of a game. The options of play are completely limiting and the game is so hard, being only familiar with the show leads to failure. There is nothing about this game other than its Simpsons' theme that makes it a must have. If you are a casual player looking for a fun trivia game, I'd suggest you keep looking.

Jeopardy But With Simpsons Trivia

Simpsons Jeopardy is a take on the traditional Question and Answer trivia style game that is Jeopardy. In the game you select a character and answer questions related to Springfield, characters on the show, and on other Simpsons related topics. The game has one mode of play, which is the Jeopardy style, but you do have the option to play with two other friends in a heads on trivia battle.

Is There Anyone In Here ?

The gameplay of this game is what lacks the most. The game feels really disconnected and out of place. This is most likely due to the lack of sound effects and music. The game is almost completely silent. There is no clock that counts down to let you know how much time you have to answer questions, the questions are not read to you, and there is not a sound effect that shows you if you got a question right or wrong. The game is completely silent, making it nearly impossible to get invested in.

So What's the Answer?

The gameplay also lacks when it comes to the questions and the ways they are presented. A question is shown and that's it. There is silence until you hit your buzzer or the time runs out. If you do hit your buzzer you are not entirely sure if it's your turn to answer or not because no indication is given. If you do answer and it is your turn, you only have a small amount of time to see the possible answers and re-read the question. This makes this especially difficult and may lead you to guessing on answers you would have gotten right if you knew the options before you buzzed in or if you were given more time.

You Have To Be a Simpsons Genius to Compete

Overall, Simpsons Jeopardy is a bust. Not having sound to listen too while playing makes the game extremely hard to follow, making you feel unengaged. The questions are too difficult for the everyday player and the gameplay is dismal. If you are a collector and must have all things Simpsons this might be for you, however, if you are looking to have a good time with an engaging and easy to play game, keep looking. 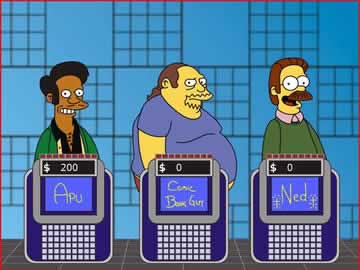 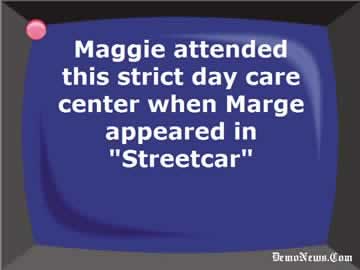