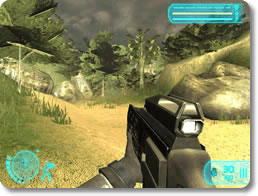 3D Shooter Based on the National Guard's Input

The game focuses on the unconventional application of new and emerging weapons and surveillance technologies in the war against terrorism.

PRISM takes place in the near future with the player becoming the newest member of a highly secretive homeland defense unit known as PRISM. PRISM: Guard Shield focuses on familiar locations in the US such as Washington, D.C. and San Francisco, CA. When terrorist activities are suspected or potential targets are identified, players are called into action.

PRISM: Guard Shield is being developed simultaneously with a game for the commercial market called PRISM: Threat Level Red. Players will find themselves in a unique gaming experience that draws players into a world that blurs the lines between commercial entertainment and America's secret struggle against terrorism using tomorrow's technology and weapons.

Prism: Guard Shield, a First Person Shooter (FPS) game designed in partnership with the National Guard, is a well produced combination of stealth operations and fast paced action. In this game you are a member of the police force on a mission to rid the United States of terrorism. The game's levels are extensive and take you to locations all around US from a New York harbor to San Francisco, CA. The single player mode, online option, and free download make this a great game that you should give a try.

As a member of the United States police force your job is to break through the lines of terrorists and uncover valuable intel that can protect the US against attack. You play through the first person perspective, using both the keyboard and mouse as your devices to move.

The WASD keys are used to move the body of your character forward, left, backwards, and right. The mouse movements act as your head and eyes. You look, and move your gun, where your cursor is pointed. Left clicking the mouse fires your weapon and right clicking aims your gun. Other buttons are scattered throughout the keyboard and include reloading, an action button, jumping, running, and grenades along with others. These buttons are pretty typical of a FPS game making it easy for fans of the genre to pick up.

Single Player - Work Your Way Through the US Busting Terrorists

Prism: Guard Shield has both a multiplayer and single-player option that keep the game interesting and increase playability. In the single-player Campaign mode you fight for the United States to rid the US of terrorism. Each level is a different location throughout the states and each place brings new objectives, which develop the game and keep it interesting. The extensive levels bring a lot to the game and make it so you'll have hours and hours of play.

Death Match is an everyone for themselves mode that pits you against players (up to 32). This is for more experienced players and is fast paced. Team Death Match divides the players into 2 teams. This is a great game for building fighting strategy and using teamwork. Team Death Match can be seen in many FPS games and is great for extending playability and replayability.

Dark Lighting Is a Detraction At Times

The negatives of the game are few and far between, especially since this is a free download (you can't complain much because it's free). One of the small issues with the game deals with the lighting. Many of the levels seem too dark and are difficult to see, even with the “night vision” goggles. This is a small error; however, it does make a slight difference, especially with navigation.

Another issue with the gameplay is your ability to move. Movements tend to be slow and the “sprint” action runs out quickly. The ability to sprint at a constant rate would be a great addition to the game, make the movements more fluid. The final slight “flaw” of the game is the online play. Having to create a GameSpy profile before you can go online to play makes the process more difficult and less enticing for many players. If you could just go online it would be much easier and more people would surely play.

Overall, Prism: Guard Shield is a great game that has both extensive multiplayer and campaign options. Any first time player of the FPS genre will easily be able to pick this game up with the accessible controls and smooth gameplay. Veterans of the genre will also find this game's many options of play enjoyable and worth their time. Though there are a few flaws with the lighting and online accessibility, this game is really great and worth the cost to download: free. Give it a go if FPS games are something you are a fan of, or if you are looking for a great game to try for the first time.

Watch some of the action in this first person shooter. 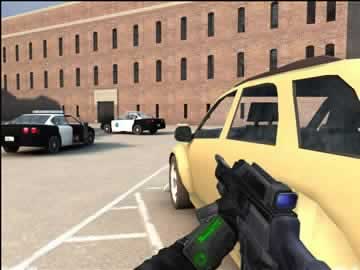