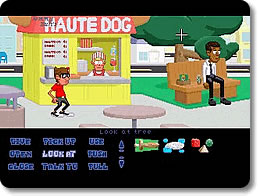 Help Jackson get to his D&D game and solve some quality puzzles along the way!

No-Action Jackson is a fun-filled, geeky adventure game in the vein of much beloved classics such as Day of the Tentacle.

The game revolves around young Jackson, a lover of role-playing games on a mission to sneak out of the house so that he can meet up with his friends for an "important" session of Dungeons & Dragons.

Of course, that marks just the beginning of Jackson's quirky journey, which is full of unexpected twists and turns, and some really engaging and challenging puzzles.

With excellent animation, graphics, and a chuckle-heavy storyline - you'll find plenty of quality gameplay in this completely free game!

If you are looking for more hilarious adventure games, try Sam & Max Season One.

Very rarely does one come across a game in which the subject matter focuses on the nerds themselves in pursuit of virtual delight.

My Name's Jackson, D&D is My Thang

No Action Jackson explores the tale of a gallant young LARP-er (Live Action Role Play) who is anxiously attempting to make it to his D&D session. Excitement ensues as seemingly simple conversations unfold into a series of mini-games and thought-provoking tasks that must be maneuvered to successfully “rally the troops” and commence the slaying.

An example of the uniqueness, and perhaps absurd tasks you undertake involves pilfering a “granny bra” from the guest room, filling both sides with marbles and “double catapulting” the round devices towards a bird thief who has taken control of grandpa's cane. Very often similar obscure items must be collected throughout the game which increases difficulty and adds length as oftentimes the first glance at an object will not provoke any indication it must be added to the inventory.

Clever and often rather satirical dialogue is exchanged between our young protagonist and his kooky clan, particularly from Jackson himself who can be seen caught in fits of “fury, angst, rebellion!” Animation quality itself is not particularly awe-inspiring, but it is quite colorful making for attractive locations that are enjoyable to play. Sound effects are sometimes a burden, such as the dreadful screeching hum of the vacuum cleaner or the not-so-subtle whoosh of the washing machine.

The only other overwhelmingly negative component is the reliance on the command menu by which it is necessary to click on every new action undertaken, such as picking up, opening, and closing.

All in all, though, No Action Jackson is a rather amusing game, most notably for the rarity of subject matter and delightful tasks that are a derivative of such originality and most adventure seekers will appreciate it as such. 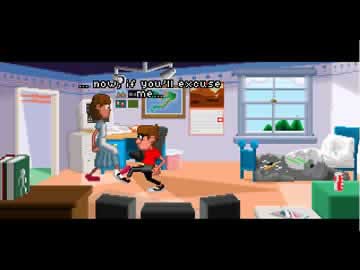 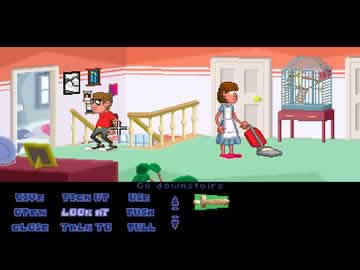