Help Sir Graham find the 3 magic items that will give Daventry its former glory! 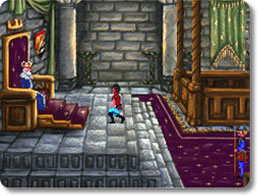 An Excellent Remake of a Classic!

King's Quest: Quest for the Crown was originally released in 1984 and was a milestone in adventure gaming. Now, Anonymous Game Developers Interactive have updated the game so the world can play it on their modern PCs - for free!

Quest for the Crown features Sir Graham, the most famous and noble of all knights of Daventry. The King has summoned him to find 3 magical items that will ensure the glory of the kingdom after the king passes. This is thy quest, O Knight! :)

Witness the Birth of Point and Click Adventure Games

King's Quest 1 represents one of the first point and click graphical adventure games ever made. You will journey through the land of Daventry finding different items to aid your quest. Use those items on people, places, and things to unlock new paths and new items for your quest.

Overall this is a fun game, filled with humor and should please any adventure game fan.

Stuck in the game? Check out this walkthrough

King's Quest I set the standards for adventure games at the point of it's initial release in 1984, revolutionizing the industry by creating interactive characters that could move about each location. Updated and re-released with better graphics and enhanced dialogue options that add length, Quest for the Crown retains its original splendor thanks to the genuine challenge it presents.

If you prefer more casual adventure games with easy tasks and a multitude of hint options then this may not be the right choice for you. There are no hints or help if you are unclear of where to go next and the more casual player will probably be turned off by this fact.

Often times items are hidden under rocks or down wells making them artfully tricky to uncover and once acquired there is typically some action that must be performed in order to use them properly. Although most items picked up will be used in a different area than their original location, their use is very bluntly indicated in the game which eliminates potential confusion.

Watch Out for Traps

Throughout the game, several locations and characters are traps that will require you to restart from your previous save point (with dead ends disabled) or from the beginning (with dead ends enabled), allowing the player to adjust to their preferred level of difficulty. Clever and creative mini-tasks truly test the players logic skills, such as guessing the name of a gnome and spelling it backwards correctly.

The graphics in full screen mode are incredibly pixelated and unfortunately running it in a window opens miniature window that cannot be maximized or resized. That said, this is not enough to rob the game of its well earned praise as the trend setter for modern adventure games.

Overall, King's Quest I is a particularly challenging game that will test your patience, reason and ability through its clever challenges, lurking traps and well constructed scenery and although more casual players should approach with caution, the more experienced adventure gamer will certainly enjoy mastering this classic. 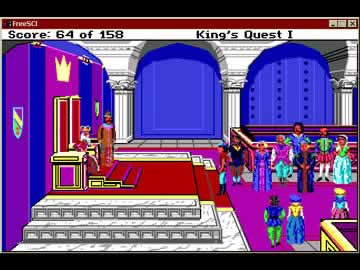