You will need to decide what weapons and supplies to purchase to be successful in your missions.

There are 6 intense campaigns that will take you through Germany, Norway and other locales trying to accomplish your missions.

Will you need to rescue hostages or destroy an enemy camp? Fight battles and see the world in both 1st and 3rd person perspectives. In this intense action game you will find your snipering, shooting and recon skills are pushed to the max.

With Hidden and Dangerous you can embark on 26 missions in WWII. Choose squad-based or strategic combat.

Fight these battles in European play fields like Germany and Italy. Challenge yourself even further by varying difficulty settings

Hidden and Dangerous, a WWII stealth-style game, has you secretly breaching the lines of the German defense. In this game you man up to 4 soldiers a round and your goal is to accomplish the given objectives as quietly and secretly as possible. Manning only one soldier at a time can be difficult when going against the overwhelming German defense, so you must be stealthy and smart to get the job done.

This stealth-style war game is a combination of an RPG and action shooter game. In it you control most every option from which soldier you want to use, to the weapons and grenades you want to suit him with. You control the fighting styles as well as the secretive attack and invasion.

Choose Soldiers, Weapons, and Get To It

In each level of the game you choose your fighters and their weaponry. You compete with up to four fighters and can cycle through which characters you control with the TAB key. Only the player you have selected advances and moves. The other players do not have any AI and are controlled solely by you, selected through “tabbing” over to them.

As you start play a short video guide plays, giving you valuable information about the objectives and ways you'll need to complete the level. In the first level for example, you must cross a rickety bridge in order to infiltrate the enemy lines. This strategy and objective is nicely laid out for you in the brief tutorial movie, making finishing the level much easier. As you play you man one of the four characters you brought to the level. You move your character with the WASD keys (forward, left, backward, right) and aim and move your head with the mouse.

This game, unlike most action shooters, is set in the third person view mode. This is nice for navigating; however, when you are faced with taking down an opponent, shooting and aiming from the third person is difficult if not nearly impossible. Even with the helpful aiming line, shooting a target is outstandingly difficult. If you do in fact fall victim to the German defense (very likely because the enemies are unrealistically accurate with their shooting) you “tab” to the next soldier in your lot and resume where you left off.

Since there is not AI that maneuvers the other soldiers while you play, you will have to guide your soldier from the beginning of the map, which is tedious and takes awhile depending how far into the level you are.

The graphics and audio qualities of the game are pretty good, especially for an older game. The levels, though at times may appear very blocky, are unique and well designed. Often times you might find them to be too dark, however, this isn't a huge deal and it adds to the realism.

The sound effects of the game are pretty good as well. The background music adds to the intensity of the game, getting more suspenseful when things get hairy. Also, the effects of the weapons and the explosives add to the realism. Though all the characters sound the same, this is easily forgotten by the orchestra creating suspenseful music.

Though Hidden and Dangerous is a free download, there are some flaws that make this feel like it deserves to be free, or like you should be paid to play it. For starters the game's interface is way too complicated and hard to get started. For just starting a game you will have to go through about five or six menus, choose your weapons, and add your characters etc. This is great for options, however, getting started takes five minutes, which is way too long. If there was a button that would speed up the process (default settings) the game would be much easier to start and play.

The second of crucial errors is navigating the map. Though you are given a brief tutorial video explaining the layout, there is no in-game map to refer to. This makes getting lost or turned around an option, especially if you missed or forget the pre-level video.

Another flaw of the game is aiming. Aiming through a third person perspective is nearly impossible. Even with the “helpful” aiming aid, lining up the enemy, especially in a quick manner, can't be done. Your inability to aim will lead to unavoidable deaths, which can be frustrating especially later in the game.

Conclusion - Some Critical Drawbacks Weight This Game Down

Overall Hidden and Dangerous is fair. Its saving grace is that it's free. In it you will have to infiltrate the German defense as stealthily as possible. This is a great game idea, which is enhanced by the suspenseful symphonic music and great graphics. However, not being able to aim, navigate with an in-game map, or quickly play due to the way too extensive interface, takes a lot out of this game.

This game is good for players on a budget, or those looking for a third person shooter game. However, if you are a serious player looking for responsiveness and ease of play, keep looking.

Catch a part of the action in this thrilling adventure shooter! 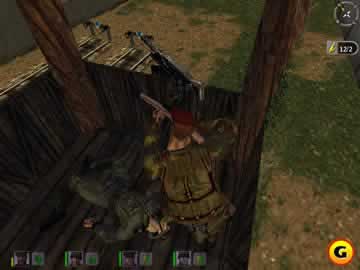