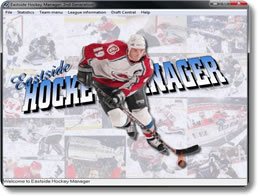 Assemble Your Dream Team and Rise to the Championship of the NHL!

The Ice Rink of Honor

Ice hockey is by far one of the most intensive sports to watch. On a field of slick ice, grown men battle for dominance of a single black puck. Said puck is often sent flying into the air at a velocity of over a hundred miles an hour, with only a lone and heavily armored goalie lying between it and another point for his opposing team.

In short, hockey is fast, furious and fantastic; any job related to it would surely be filled with excitement and drama. Unfortunately, not all of us can get involved with the game.

Thankfully, Eastside Hockey Manager offers the next best thing by letting you take control of your own team in the National Hockey League. Do you think you have what it takes to win the Stanley Cup? There’s only one way to find out!

Hockey is a sport built for the big and the bad. If you want to measure up to any of the league’s big players, then you’ll have to enlist the biggest, baddest players you can afford. Eastside Hockey Manager provides you ample opportunity to assemble the most killer team on ice.

You got your team and you got your players. The only thing you need now is a solid game plan. There are many elements of strategy required to win a round of hockey; Eastside Hockey Manager gives you all of them!

As a sport management simulator, Eastside Hockey Manager is a fierce competitor. As a hockey team manager, it reigns absolutely supreme. Few other titles in the genre approach the level of detail afforded here. This is made doubly impressive by the fact that it’s also completely free!

Fans of the NHL should absolutely not miss Eastside Hockey Manager; it’s a winner through and through! 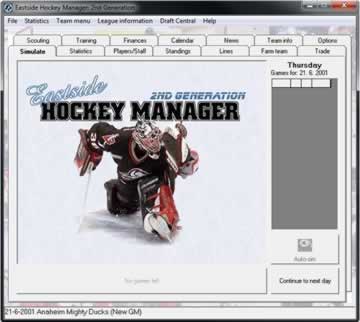