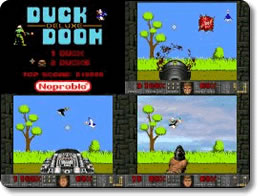 An Excellent Remake of a Classic!

If you are aching for a little nostalgia and want to see what happens when you combine Duck Hunt with Doom, you'll love Duck Doom Deluxe. Take the destructive guns of DOOM and use them to shoot the cute ducks from Duck Hunt and you'll start to see the twisted appeal of this game.

There are 7 different weapons for you to play with in Duck Doom Deluxe. You get to start off with 2 and as you progress, you can add more weapons to your arsenal. You can't have it all right away, you need to earn some destructive powers!

What method of destruction will you choose?

Choose between the fist, pistol, shotgun, super shotgun, chaingun, rocket launcher and even the mighty BFG-9000. Too much to handle? Don't worry, like I said, you don't get them all at once!

Duck Doom Deluxe is a brilliant combination of the classic game Duck Hunt and the assorted weapons of Doom. You get to shoot down ducks with guns like the Super Shotgun and the BFG-9000. With 25 levels of increasing difficulty almost everyone will be challenged by this game. If the thought has crossed your mind that “surely this game will let me shoot the dog”, don't get your hopes up. Today won't be the day that you exact your revenge for all the times he's mocked you.

This game is just like the original Duck Hunt, but from the first person shooter perspective of Doom. You will have the same window as in Doom, including your ammo, guns and health. You also use an assortment of the weapons from Doom. You unlock weapons as you progress through the levels. You can use guns like the Super Shotgun and the Rocket Launcher. It takes a skilled hand to kill a duck with a rocket launcher. The higher level guns only have enough ammo to kill all ten ducks with one shot each. For example, on one level you are only given ten rockets.

This game only offers the duck shooting portion of Duck Hunt and leaves the clay shooting out. Everything is controlled with the mouse and number keys 1-7. You have the choice of shooting one duck at a time or two. You are given the same three chances in both so, the two duck version is a little more challenging.

There are also two difficulty settings, Feathery and Fowl, that can increase the difficulty. As you progress through the levels the ducks will fly faster and stay on the screen for shorter periods of time. The percentage of ducks you must hit also increases from 60% to 100% in the later levels. That means in the first level you can miss four ducks while in the last levels you can't miss any.

Not Much Variety Here

Duck Doom Deluxe is a very limited game. All the levels are the same except for the difficulty. The only thing that would cause you to replay the game is to get a high score and there is no real draw to do that. The different modes of play do offer a small amount of variety, but not enough. As any player of the original Duck Hunt game will tell you, everyone longs to kill the dog every time it pops up and laughs at you. Unfortunately, this game is no exception to the “no shooting the dog” rule.

The unique combination of Duck Hunt and Doom give this game an interesting edge. The sassy remarks when you try to quit will make you laugh and you can enjoy blasting ducks with the BFG-9000. Duck Doom Deluxe might not entertain you for very long, but you will have a blast while it keeps your attention. With the simple controls anyone can play this game and have a great time. As a free game it is definitely worth the download. 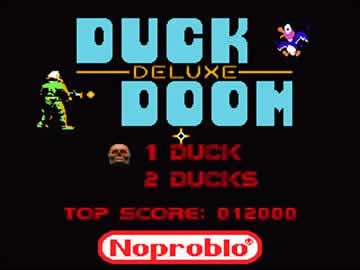 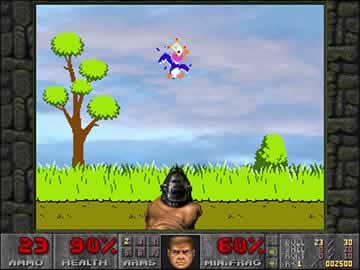