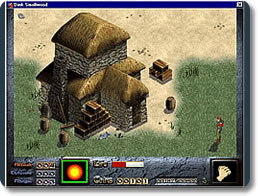 A hilarious and free action-filled RPG!

Dink starts out as an ordinary pig farmer, if pig farmers are ordinary. When his father disappears, Dink is left behind in a small village with his mother. Somehow, as he is outside, his house burns down, killing his mother. He is then told to go out of his village, into the world to find his aunt, and start living a new life with her. Along the way, he hears of a powerful and sinister group known as the Cast whose nefarious deeds are threatening the kingdom. Dink eventually makes it his quest to defeat this mysterious cabal.

This game was once sold in stores, but is now available at no cost to you as freeware! That's a great thing since Dink Smallwood has developed something of a cult following as a hilarious adventure game that provides many hours of top-notch playing fun.

One of the unique features of Dink is its abilities to run Dink Modules (DMOD's) for unlimited adventure. Dink Edit is included with the game so you can make your own adventures!

From Pig Farmer to Hero

Dink Smallwood is a humorous and simple role-playing game (RPG) that has you playing as Dink Smallwood, a pig farmer who now finds himself an unlikely hero working to stop the forces of evil. You explore the world as you complete a variety of quests and face off against various monsters and enemies. You can download add-ons for the game that add new adventures for you to undertake. Not only that, but the game is completely free as well.

Gameplay in the game is very similar to many other RPGs. You don't create or customize a character when you start, but rather start off as Dink Smallwood. You have limited health and abilities at the start, but can improve your character as you advance through the game.

You start by completing a few simple tasks, and the story advances as you work through these quests. Along the way, you'll take part in combat, which is relatively fast-paced and simple. Rather than having turn-based combat like many RPGs, this game has combat occurring in real-time so that when you press your button to attack, the attack happens immediately.

A Bit On the Simple Side

One downside for RPG fans when it comes to this game is the simplistic nature of play. While keeping it simple allows more people to play and lets them get into the action quickly, it also means that a lot of the more in-depth or involved elements that RPG fanatics crave won't be present.

Another possible issue is how abruptly the game can end. Picking the wrong option in a dialogue can cause you to die. Death can come quickly in combat if you aren't careful. Dying ends the game, and forces you to start over from your last save. Additionally, you can only save at certain spots. This can be a bit frustrating when you haven't saved in a while and die almost out of the blue.

One positive aspect of the game is the humorous interactions and storyline throughout the game. Dink Smallwood is a simple pig farmer, a fact that he's constantly reminded of (to his displeasure), and now finds himself in the role of a hero fighting evil. Throughout his journey he comes across wacky characters and scenarios that will make you crack a smile, if not bust out laughing.

There are some issues with the dialogues between Dink and the other characters, like your choices having little impact on the game most of the time, or characters trying to talk to you when you are fighting. However, these drawbacks aren't a huge problem overall.

The graphics in the game are a bit limited or dated given the age of this game, but still look fairly good despite their age. There's a lot of color and detail despite the lower quality, and the visuals really don't detract from the gameplay. The game also includes a good mix of music that fits along with the medieval theme or setting of the story.

Conclusion - Funny, Free, and Worth Playing

Dink Smallwood is an hilarious RPG that's perfect for anyone looking for some quick and easy RPG action. There are a few small issues like the limited graphics or how easy the game can end, but there are many positive aspects as well.

There's a strange and funny story to follow as you progress through the game and meet a variety of wacky characters. You can explore the world, completing quests and battling enemies. You can even download various add-ons that add even more excitement and adventures to the game. Considering that it's also free, there's no reason not to at least give this game a try.

Click above to watch a few minutes of gameplay from Dink Smallwood. 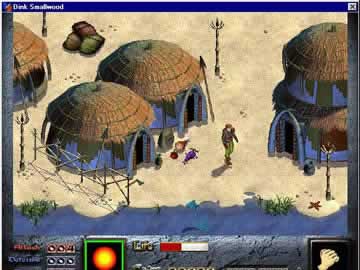 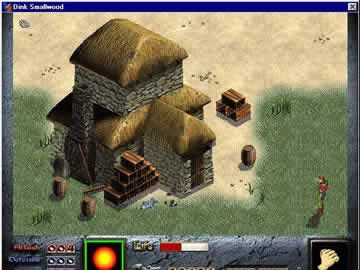