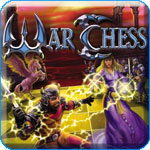 War Chess sends you to a world where races of dwarves, elves, and people exist. Guide your troops through distant deserts, ancient temple ruins and other mysterious locations. Defeat your opponents and lead your army to victory in a gloriously rendered game of chess!

If you are a bit bored with the same old looking chess pieces, War Chess will fix that. When you capture a piece, you watch an animated battle. Each piece has different attack moves to vanquish your opponent. Not a bad way to add a little variety to such a great classic game.

Chess enthusiasts might find this game's war theme to be something special, however, it leaves something to be desired. Based on just the title alone you might expect an intense battle based chess game. This element does exist, but it is not strong enough to set this game apart from others in the chess genre.

War Chess is a 3 dimensional take on chess that has your pieces moving, fighting, and slaying one another. In the game you are matched up against a computer opponent. You choose from 1 of 10 different maps (Desert, Ruins, Forest), set the difficulty settings, and duke it out in an intense battle scenario chess match.

As you make moves on a 2 dimensional chess board in the top right corner of the display, your pieces which are 3-D figurines, move around the board. If your piece takes another piece there is a small battle that ensues, showing your character victorious. An example of this could be seen if the Bishop takes a piece. He uses a bow and arrow to shoot the opponent piece, and then he captures the position.

Like any version of chess the objectives of the game are the same. The winner of the game is the one who captures the opponents King by putting it in such a position that it has no legal moves (this is called checkmate). In the event that neither player can possibly checkmate the other, the game is a draw.

War Chess is played on a standard 8x8 grid, giving it 64 game squares. There are 16 pieces for each player, 8 being pawns which have the most limited movements and the other 8 being specialty pieces that are more dangerous and have set legal moves. The more pieces you can obtain from the other player, the easier it is to place them in check or checkmate. This makes smart play (protecting your pieces from attack while acquiring pieces from your opponent) a crucial part of the game.

Learn the Rules But Not Strategy

If you have no chess experience or don't know the rules, there is no need to fret. War Chess has a tutorial feature that explains the rule of the game, the different pieces, and the moves the pieces can make. If you have never played before the tutorial is a great place to start because it gives you the basics of the game.

Despite giving the rules of the game the tutorial does a poor job of explaining the intricacies of strategy. The only way to improve your game is through trial and error and through playing opponents. There is no guide to teach you strategies, which would make the game more user friendly and overall a better game.

The online mode this game has is lacking at best. It might have been great at one point and time, however, since new games are constantly coming out this older version has lost its online population. Good luck trying to join a game. There are almost no players online so it is nearly impossible to play opponents via the internet. This takes away from the game and makes it more limiting. Chess is not nearly as fun if you cannot play an actual person.

Conclusion - Interesting Animations, Not Much Beyond That

Overall, War Chess is a limiting chess game with an intense name. The features of the game and the 3-D battle scenes are not significant enough to make this game distinct from other chess games on the market. Also, the lack of a playable online mode limits this game to only computer opponents.

This game might be best for someone who needs to see 3-D battles while playing chess, or for someone collecting different chess games. If this is your first chess game purchase, others on the market are more complete. Especially if you are new to chess, find a game that has better explained strategy and a more complex tutorial. 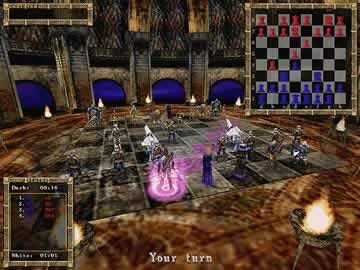 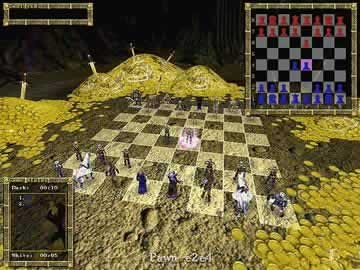