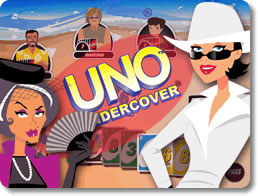 Go undercover with Felicia Blue and use her UNO skills to solve a spy mystery!

In Adventure mode, you will joing Felicia Blue, an undercover secret agent posing as a professional UNO player, and track down spies, foil evil plots and regain Felicia's champion status by winning the UNO World Tournament.

During the adventure, you will complete a series of missions and challenges by playing UNO in a variety of venues against a cast of fun and eccentric characters with unique play styles and special talents.

Need to satisfy your UNO cravings? Download UNO Undercover and get to it!

For dedicated fans of the children's card game UNO, this computerized version of the popular game is sure to draw a smile. UNO Undercover is an adventure-based game that incorporates traditional “quest” themes with a heavy focus on the card game it is based on. The vast majority of the game is playing UNO, with very little else. This is a definite plus for hardcore UNO fans, but can make the game a bit boring and repetitive for the casual player.

The game has two modes of play: Adventure and Quickplay. Quickplay allows you to play single games of UNO whenever you like, while Adventure takes you through the storyline. The Adventure mode has you playing Felicia Blue, one-time spy and member of a professional underground UNO organization. Now a wife and mother, Felicia is on vacation with her family when she is contacted by her former coworkers, who are interested in getting her back into the spy business. Her rival (and of course, the baddie), is Madame Zero, who is using the UNO League for her own sinister designs. It is up to Felicia to infiltrate the UNO tournament and stop Madame Zero from achieving her evil plans, which she does by playing UNO games with various characters.

The gameplay of UNO Undercover is relatively easy. All actions are done with the mouse, and there is little to do besides play cards. The rules are also rather simple. Each player is dealt seven cards, and must try to get rid of all their cards by discarding them onto the main pile. This can only be accomplished if the player has a card of the same color or numerical value as the card on top of the pile.

For example, if the card in the pile is a red 3, a player could play a three of any other color or any red card they had in their hand. If you are unable to play a card, you must draw a card from a different pile. The most important action of the game is calling “UNO!” when you only have one card left in your hand. If you fail to do so and another player calls you on it, you will have to draw two more cards.

The premise of the game is sort of fun and entertaining, but the actual application is lacking severely. The graphics are 2D and pretty bad, because the characters do not actually move or change in any way. There is a drawing of each character that looks “cut-and-pasted” onto an unmoving background. The characters very rarely change facial expressions, even during the dialogue. During play, a character may make an angry face if they are doing poorly when they expected to win, but that's about it.

The dialogue is also incredibly cheesy and poorly done. Most of the dialogue doesn't seem to have anything to do with the game or storyline whatsoever, but instead is thrown in for “comic relief” when it definitely isn't funny. There is only music, which is spy-themed and isn't bad, but the lack of voiceovers or any kind of dialogue is frustrating. The characters say “oh!” occasionally, but that's about it. There are some sounds effects but they are very annoying.

The only slightly interesting parts to the storyline (depending on your interests) are the collection of “Command Cards” and the ability to change Felicia's clothes. Command Cards are basically special cards that can be used during gameplay, which do special things such as skip a player's turn in addition to changing the direction of turn taking. Even this isn't particularly entertaining, and changing her clothes is only fun for about 5 minutes. Neither of these give the game a sense of direction, which the storyline completely fails at.

Conclusion - Should Have Stuck With the Basics

In general, UNO Undercover is pretty poorly done. It could be entertaining for a select group of players, but most players will expect far more in the storyline, graphics, and gameplay departments than this game delivers. If you love UNO this game is worth the download, but certainly don't expect too much from it. 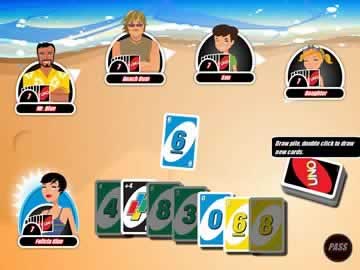 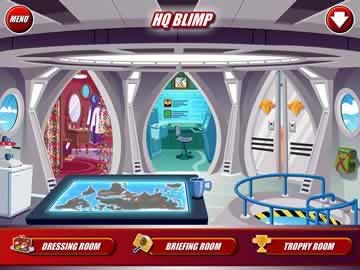