Classic Spider Solitaire with the ability to create your own games! 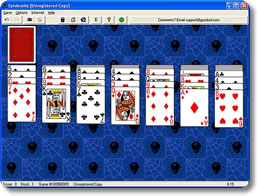 Play Tons of Classic Spider and Much More!

Enjoy the challenging two-deck Spider solitaire game plus 15 other similar games like Spider One Suit and Spider Two Suits! Choose from fun Spider variants including Miss Milligan, Scorpion, Spiderette and much more.

Play Your Heart Out and Create Your Own Versions

Choose your game and read easy-to-understand rules or just start playing! Enjoy great features such as being able to undo any and all moves, automatic game saving, customizable deck backs and much more.

You can even create your own card games! This feature is easy to use; just think up the rules for the game and tell Spider Wizard what to do.

Enjoy Alone or With Family and Friends

If you've gotten caught in the addicting web of Spider solitaire, this game is for you! Enjoy many variants of Spider and if you want more, just make your own versions. Teach a friend how to play or have a family fun night of classic Spider or your own new games.

The gameplay is fairly simple in most games, and usually pretty easy to pick up if you have played some kind of Solitaire before. Each game has somewhat different rules, although due to the nearly identical subject matter, many end up being very similar with minor changes in rules. There is everything from traditional Spider Solitaire to Miss Milligan to Brown Recluse. The instructions are generally fairly intuitive, but have some jargon that may be a bit off-putting at first. Luckily, all of the possibly confusing words are set up as links to their own help page and are defined if you click on them. Words like this include tableau (which basically refers to the piles of cards you are trying to clear), foundation and free cells.

Each game utilizes these three elements in its gameplay, and the main goal of all the games is to clear the cards in the tableau by some method of stacking. In traditional Spider Solitaire, you stack cards in the tableau in order down from King to Ace, which build down regardless of suit. However, your goal is to clear those stacks, which can only be done if they are built down from King to Ace in suit. Most of the other games follow these basic rules, and all have the exact same gameplay (stacking cards to clear them).

Random Game or Go On Tour

Spider Solitaire allows you to play a single game either by choosing it yourself or by selecting “random game” from the menu. The random game feature is helpful because most people will not know where to start among so many games that they have probably never heard of.

There is also Tour Mode. In Tour, you are able to create a list of different games to play in a row. You get one round of each game you choose and your total score is tabulated at the end. You can either choose to create your own Tour by selecting the games you want to play in the order you want to play them, or choose from two pre-designed Tours, which are Spider Tour and Grand Tour (Spider has three games while grand has all the games included in the collection).

Create Your Own Solitaire With the Wizard

There is also Wizard, which is an option that allows you to create your own unique game of Solitaire. There are 12 different categories you must select a rule from in order to create your game ranging from how many decks there are to whether or not a grouping of cards can be moved as a unit. It is rather complicated and will be difficult to use well if you don't know a lot about the mechanics of a Solitaire game. However, it can be a lot of fun to learn about the mechanics and make your own game.

There are also several drawbacks to Spider Solitaire. Reading and learning the rules for every game you play is time consuming and boring. There is no story or fun animations or anything to tie all the games together or make it feel as though there is a cohesive element to the collection. The graphics are dated and flat, bringing back memories of old computer operating systems' help sections. There are no animations and the only sounds are the cards flipping into place. This makes an already unwieldy game boring and annoying to listen to.

User Interface is Not the Best

The User Interface is also small and boring, with very tiny buttons in the the actual game window. These buttons have icons indicating their function, but these don't necessarily have anything to do with what the buttons are supposed to do. For instance, the button to exit the game is a sad face emoticon. This means that you have to memorize pointless buttons, or click until you find what you want.

Conclusion - Does the Basics

Overall, Spider Solitaire is only pretty good if you are an extreme Solitaire enthusiast or someone wanting to get into professional Spider Solitaire playing. The graphics and sound are very poor and lacking in every category, and the User interface is terribly small and difficult to sift through. The ability to create your own game is a great feature, but there are so many intricate options that only someone well-versed in the workings of a Solitaire game would be able to create something playable. If you love Solitaire, give this game a try, but if you are just a casual player, there are much better games to be played. 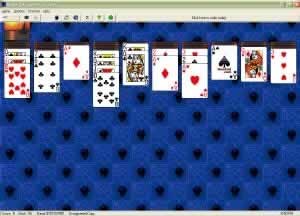 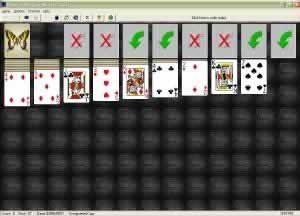