Fun blend of Tripeaks and Golf into a unique game experience! 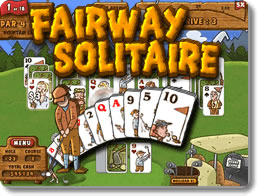 Not your average solitaire game!

We admit, solitaire games can get a bit boring. You've played one, you've played them all.

The makers of Fairway Solitaire offer a new and exciting version of tripeaks solitaire that really add new life into the game.

By adding the elements of the game of golf, Fairway Solitaire becomes an almost new type of tripeaks game. Clear as many columns as you can to get a golf type score. Encounter bonus cards that help you clear more columns. Some levels have some cards showing so you can plan your moves. Remove hazards like sand traps by finding sand wedge cards. The variety goes on and on.

You will play 70 unique courses in locations ranging from exotic forests to Scottish highlands. Choose your golfer and experience realistic golf commentary, hilarious wild shot cards, and three fun mini-games. You can even buy clothing powerups to help your game! How cool is that?

Fairway Solitaire is a fabulously done solitaire-esque game that will have you clicking cards for hours. With great graphics, a fun theme, and enough variety to avoid feeling repetitive, this is not your typical solitaire game. Your dream is to become a world-renowned golf legend, and to do so you must clear layouts of cards at golf courses around the globe. The simple rules but difficult application make it completely addicting, and you will want to keep playing for hours.

Choose a Character But It Doesn't Matter Much Which One

To begin your adventure, you select a character to play from a list of five ladies and five gents, all of whom vary in age and attractiveness. The character you choose has no impact on your gameplay, and the only thing that differs between them is how they look.

Then follows a great tutorial explaining how to play and what the different features are. You are given a layout of cards with some face down and some face up. You are also given a foundation card that is face up, and a stack of face down foundation cards for if you get stuck. The goal is to clear all the cards on the board by clicking on cards that are either directly above or directly below the foundation card in value. For example, if the foundation card is a Jack, you can clear either a 10 or a Queen. If you choose the 10, then you can clear either a 9 or a Jack, and so on. For as simple as it sounds, this game can require lots of strategy to beat, because you will need to plan out your moves based on the face up cards in order to maximize the amount of cards you can clear.

Each hand of cards you play is a hole on a golf course. Each hole also has a par, which means the amount of cards expected to be left on the game board when you can no longer make any moves. The stack of foundation cards will help you clear lots of cards, but there are a limited number of cards in the stack and you can only go through them once. This means that if you aren't careful, you'll reach the end of your foundation cards and still have a ton of cards on the game board, making your score way above par, which will make it difficult for you to complete the course.

Fairway Solitaire also provides a ton of variety in gameplay. The basic gameplay is challenging which makes it rather addicting and combats the repetitive nature of card games. On top of that, Fairway Solitaire adds several fun features that keep gameplay from getting boring. While flipping through your foundation cards you might randomly come across a Wild Shot card. This takes you to a screen with several images quickly cycling through. You tell it when to stop, and whatever picture you land on is the outcome of your Wild Shot. It can either be good (like adding on to your score multiplier), or bad (losing two foundation cards).

There is also the chance of landing on a couple of mini games, which are a lot of fun. Sometimes your cards will be covered in a sand trap or water hazard, and you must find the sand wedge card or clear all the water cards in order to continue. As you play you also unlock new courses and new clothes. The clothes are like upgrades, and give you helpful benefits, like one extra Mulligan (undo).

The graphics in Fairway Solitaire are great. Everything is sharp and clear, with bright colors and animations, and the golf theme is carried throughout the entire game very well. Every so often a gopher will pop up and do something silly, or a bear will have picnic behind your cards. Between courses a newspaper will pop up with the latest headlines about your success, almost all of which are hilarious.

Sound is a Bit Basic

It is a shame that with such great graphics, the major fault of the game is in the sound. There are all the necessary sound effects, like a swinging gold club or birds twittering as they fly by, but there is no music to tie them together. There is an announcer, who will occasionally say something totally hysterical and stereotypical of a gold commentator, but he is silent most of the time. Perhaps it is meant to make the game feel as though you really are at a golf course, but it ends up just making the game feel slightly empty.

Fairway Solitaire is a unique card game in a sea of seemingly identical card games, and it stands out in nearly every category. The gameplay is addicting and offers plenty of variety, the graphics are outstanding, and there is quite a bit of humor thrown in via the newspaper and the announcer. Although it is missing music, this is a minor flaw in comparison with the great elements of this game. This is a fun play for anyone, and will get you hook from the minute you start clearing cards. More than worth the download!

Watch the introductory cinematic and see several gameplay clips showing off the fun solitaire action you can find out on the links. 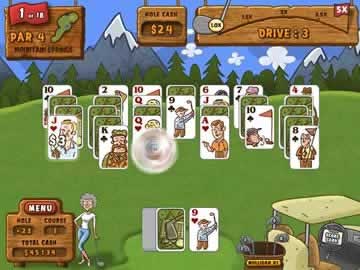