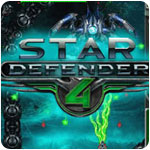 Space shooter fans check this out!

Blast away at alien ships and fight boss battles! If you like classic space shooters, Star Defender 4 is right up your alley!

Earn weapons upgrades by destroying alien ships but be careful. Get hit and you lose an upgrade! Get fully powered up and you will have one incredible fighting machine!

If your a fan of Space Invaders then you have to try Star Defender 4. Star Defender 4 takes the classic game to a new level with upgradeable guns and a plethora of secondary weapons that you can use to blast away the hordes of enemies coming your way. Dodging enemy rounds while eliminating your foes is a challenge everyone will enjoy.

This stationary arcade style shooter lets you move left and right on the bottom of the screen while aliens come in from all other directions. Coming in swarms or individually, each different type of alien will present new problems for you to deal with. Some will explode, others will drop objects that shoot missiles in all directions when you shoot them down. You have to progress through several areas that each have upwards of 15 levels for you to complete before fighting a boss at the end. Star Defender 4 skips the storyline and goes straight into the action.

Controls are easy and you can select either the mouse or the keyboard as the controller. You can move left and right, and also fire main and secondary weapons. The goal is to eliminate as many aliens as possible and get the highest score. Getting hit doesn't cost you lives, but instead will downgrade your weapon until you are eventually destroyed.

When enemies are killed there is a chance they will drop powerups. Powerups provide one of five things: main weapon upgrades, secondary weapons, instant weapons, extra points, or extra lives. You can upgrade your main weapon seven times for max damage. For secondary weapons, there are many different kinds. These include rockets, lasers, and machine guns. The instant weapons activate as soon as you pick them up and provide help clearing the screen. One instant weapon unleashes an insect swarm that destroys any alien they come across.

The graphics in Star Defender 4 are not going to win any awards but are very suitable for this genre. Much improved over games like Space Invaders, everything is very well detailed and the backgrounds add to the feel of the game. There is also a wide array of sound effects and music to go along with the well done graphics. The explosions and gunfire will make it feel like you are in the cockpit.

Star Defender 4 is not without faults. When you reach higher levels and get hit (you will) you lose your guns powerups which makes it harder to kill aliens. The harder it is to kill the more likely it is that you will get hit. The cycle inevitably leads to death. Starting from scratch at the higher levels can be nearly impossible meaning you will have to make it through almost the whole game only getting hit once maybe twice in each of the higher levels.

Another drawback could be the repetitive nature of the game. This is how most arcade style shooters are, but if you are unfamiliar you might become bored.

Star Defender 4 is a great arcade style shooter with a space alien theme. While there are better games available, not many keep it simple like this game. The controls are so easy to use anyone can learn to play this game. If you're a Space Invaders fan, an arcade fan, or just like blowing up aliens then give this game a try. 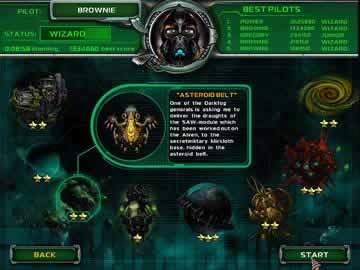 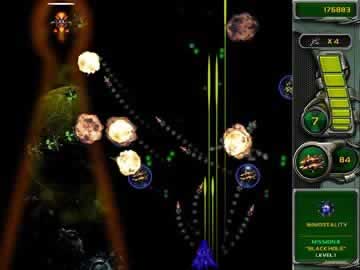