Search through 20+ levels of dungeons in search of the precious Amulet of Yendor. 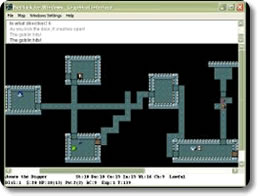 Recently, you have begun to find yourself unfulfilled and distant in your daily occupation. Strange dreams of prospecting, stealing, crusading, and combat have haunted you in your sleep for many months, but you aren't sure of the reason. You wonder whether you have in fact been having those dreams all your life, and somehow managed to forget about them until now. Some nights you awaken suddenly and cry out, terrified at the vivid recollection of the strange and powerful creatures that seem to be lurking behind every corner of the dungeon in your dream. Could these details haunting your dreams be real?

In the morning you awake, collect your belongings, and set off for the dungeon. After several days of uneventful travel, you see the ancient ruins that mark the entrance to the Mazes of Menace. It is late at night, so you make camp at the entrance and spend the night sleeping under the open skies. In the morning, you gather your gear, eat what may be your last meal outside, and enter the dungeon...

Enter the World of Net Hack

NetHack is a simple dungeon crawling RPG that can be played on almost any computer. The game is simple but follows most the traditional RPG styles. Rank up your character, choose different races to play, increase stats and skills like strength, dexterity, charisma, constitution etc.

Just don't forget to come out of the dungeons for real food now and then OK?

About As Old School As You Can Get

Nethack is a game sure to conjure up nostalgic memories of classic role-playing games (RPGs) for any long time fan of the genre. You can create and customize a character by choosing the name, race, role, gender, and alignment.

There are a variety of items to collect and use, ranging from potions and scrolls to weapons and armor. You can battle against monsters to earn experience and improve both your character and your pet. Special optional criteria called “conducts” gives you a way to challenge yourself. On top of all of that, it's also completely free.

You begin the game by entering a name for your character. You then select your character's race (like human or orc), the gender, the role (such as wizard or ranger), and the alignment (neutral or chaotic). You can then start exploring in a random generated dungeon. Your goal is to reach the lowest level of a dungeon and find an amulet located there.

Capture Monsters And Use Them

Along the way, you'll come across various monsters that you can fight (or even tame). Defeating them will grant you experience that will help you and your pet level up and become even stronger. You'll also find various items throughout the dungeon. There are mysterious potions, scrolls, gold, and other items scattered all over the place. You continue exploring and fighting in the dungeon until you either find the amulet or die. If you die, the game ends and you must either start a new game or load from your last save. You'll want to save often, since this game is fairly difficult and deaths can come when you least expect it.

One of the issues with the game is the learning curve that will require a decent amount of time to overcome. While some of the more basic functions of the game are fairly easy to learn or use, other elements are poorly explained or confusing. It's going to take time for any player to learn and be able to handle to different aspects of this game. Even then, you may still run into problems.

The controls for the game are relatively simple and straightforward. Combat, moving and interactions can all be accomplished with the keyboard. Some of the controls are a little more complex or involved, but are easily referenced via the in-game help menu.

One possible issue with the game is the simple and dated graphics that it uses. This is a fairly old game (even though it continues to be updated/improved), and that clearly shows when it comes to the looks. The graphics are very simple and contain only limited detail. There's even a mode of play for the game where the graphics are comprised entirely of text. While there may be some players who enjoy the throwback to games of old, many will likely be put off by them. The lack of sound in the game is another downside.

Conclusion - An RPG For Nostalgic Fans Only

Nethack is an RPG more suited for hardcore fans of the genre, or anyone looking for a game that looks and feels like classic RPGs. The dated graphics, learning curve, and difficulty level may be enough to annoy or put off other players. However, the game does have many positive features that make for a great RPG as well. You can create and customize a character from a number of options.

There are a ton of different items that you can pick up and use throughout the game. You can defeat monsters to earn experience and level up you and your pet. There are also optional criteria called “conducts” that you can challenge yourself with. Considering that this game is completely free and continues to be improved and updated, there's no reason not to give it a try. 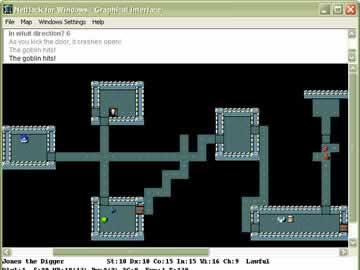 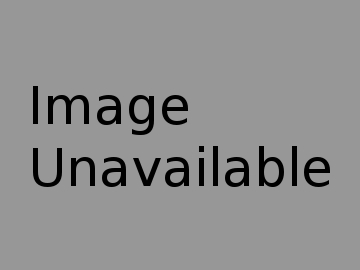